Verizon Communications (VZ) is due to report earnings this week. VZ made a base pattern back in March-June and then rallied from July to late November. The chart has weakened since the middle of November so a more cautious approach may be needed in the weeks ahead.

Let's call on the charts and indicators.

In this daily bar chart of VZ, below, we can see that prices are now below the declining 50-day moving average but above the rising 200-day average. Prices retraced about half of their November-December decline so a stall after a 50% bounce is not surprising.

The daily On-Balance-Volume (OBV) line looks like it too is rolling over after a January bounce.

The Moving Average Convergence Divergence (MACD) oscillator is turning back below the zero line for an outright sell signal.

In this weekly bar chart of VZ, below, we can see a mixed picture with the price action and indicators.

VZ made a large saucer-like pattern from the middle of 2016 to the middle of 2018. Prices broke out to the upside but then pulled back to retest the top end of the pattern. The rising 40-week moving average line was retested.

The volume pattern and the shape of the On-Balance-Volume (OBV) line does not support the base pattern. In a saucer base one usually sees volume dry up or significantly diminish at the bottom of the saucer and then build up on the right side of the base with heavy volume on the breakout. Volume looks like it is generally steady the past three years and lacks really heavy volume at the breakout. The weekly OBV line moves up and down with the price action and does not reveal a pattern of sustained aggressive buying.

The weekly MACD oscillator is in a take profits sell signal the past two months.

In this Point and Figure chart of VZ, below, we can see an upside price target of $69.63 but a rally to $58.65 is needed to strengthen this chart. 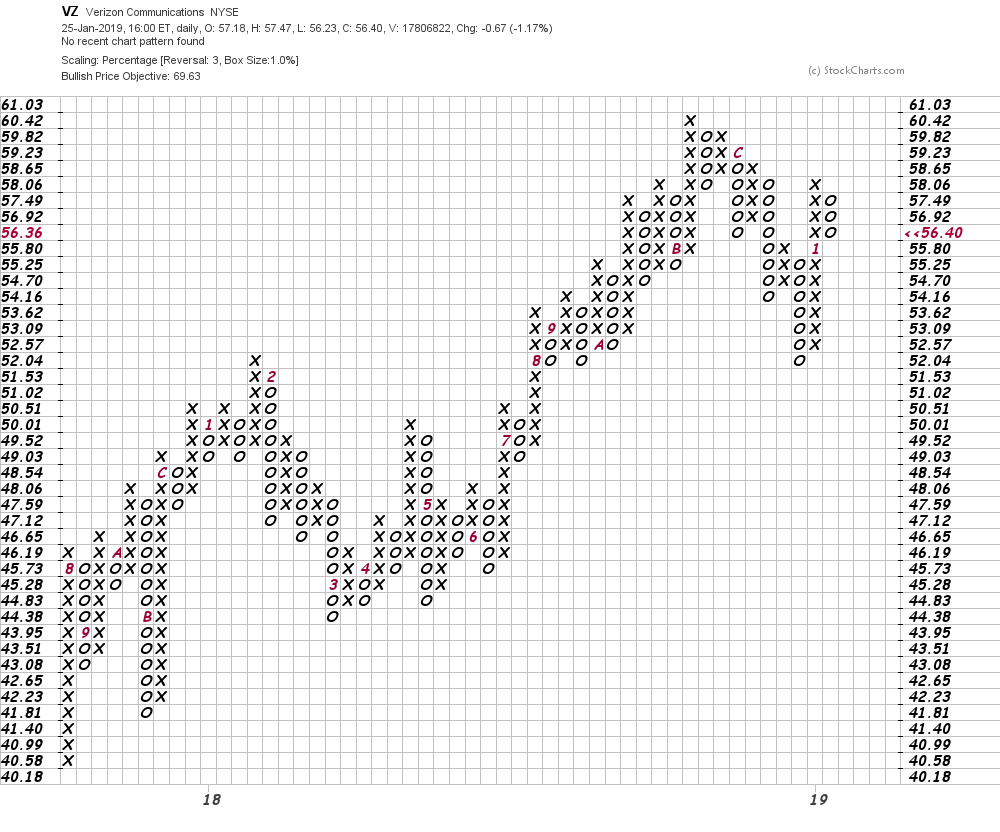 Bottom line strategy: Most of the time I have a firm opinion on a stock - buy it, sell it, or stand aside awhile - but I can't say that with VZ at this juncture.

Get an email alert each time I write an article for Real Money. Click the "+Follow" next to my byline to this article.
TAGS: Earnings | Investing | Markets | Stocks | Technical Analysis | Trading | Telecommunications | Telecom Services