Once again, history rhymes. "Yolo" investing - you only live once - has been heartedly embraced and even romanticized by too many these days - and, tacitly, that includes the media's endorsements.

The failure to temper and provide warnings of the market's uber speculative cycles are a repeated market feature.

"Workin' hard to get my fill
Everybody wants a thrill
Payin' anything to roll the dice
Just one more time
Some will win
Some will lose
Some were born to sing the blues
Oh, the movie never ends
It goes on and on, and on, and on.." 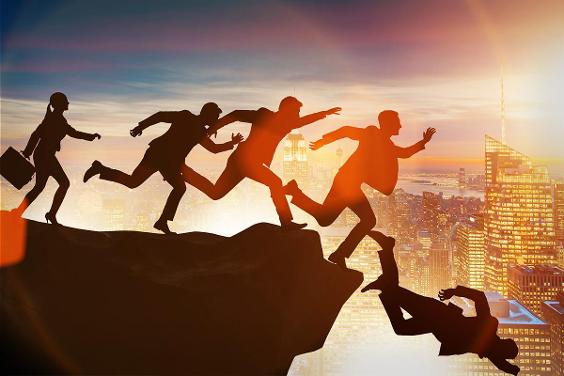 Many lessons will be learned from the 2019-2021 markets - including an important one that star managers can be harmful to your investment well being.

And that certainly could apply to Cathie Wood's ARK Invest (ARKK) - who is increasingly looking like a toxic cocktail of Tom Marsico, Kevin Landis, and the Munder Net Net Fund. (See Wednesday's Wall Street Journal Heard on the Street column.)

For many months/years the financial media has idolized, without many (or really any) questions or skepticism aimed towards the leading money managers and leading speculative stocks (notably of a SPAC-kind).

Fawning, exaggerated flattery and "Group Stink" have replaced hard-hitting analysis, common sense, logic and cynicism. Instead we too often get made for TV financial superstars who, to paraphrase my Grandma Koufax... doesn't know s--t from shinola. Case in point was the CNBC panelist who yesterday possessed, with an abundance of hubris, a new definition of inflation that was so whacky and uninformed I will not repeat what he said again.

My response was contained in "Another Lesson Learned" on Monday:

The magnitude of the declines from their respective early 2021 highs -- at a point near where many price momentum based strategists/technicians were aggressively and confidently buying/trading these stocks -- is further proof that too many know everything about price and very little about value.

I remember when many, including some contributors and subscribers on our site, scoffed and Twitter (TWTR) hated those that elected to take a pass trading these near worthless shiny objects of speculation.

While some may have successfully extricated out of the trades I know many - of a Robinhood kind - that remain long. I hear the sound of crickets.

As I warned two months ago, the latest gewgaw embrace will result in millions of investors fleeing our markets.

Another lesson learned - stick to your discipline and resist the frequent bouts of speculation that have inevitably poor consequences.

Stated simply, the media does a disservice by not providing a contrary view and by packing their business media platforms with Perma Bulls (many of whom ignore reality and valuation), managements of speculative gewgaws that defend the indefensible (business models) and "shooting stars" (like Chamath Palihapitiya) who have paraded all too frequently before the retail lemmings who are about to fall off of the cliff.

It is almost as if "Yolo investing" - you only live once - is being endorsed.

When the discovery of the facts are made, as is the case with the Wall Street Journal Wednesday morning, it is usually too late and after the fact - as noted by the dive of ARKK from $159 to under $100 Tuesday (and with over 50% of the recent and new ARKK ETF investors now under water) or by the decimation of the league leading SPACs over the last two months, many of which are down by over 70% in price.

Sure there will be a handful of traders who printed money during these times but, by then, hundreds of thousands of burnt retail traders/investors are tapped out - not to again return to the markets for years.

On Wednesday, speculation was being taken to an interplanetary level, with SpaceX announcing that the company is accepting a total digital ruse/Ponzi/fraud, Dogecoin, as payment to launch "Doge-1 Mission to the Moon."

It is clear that the continued idolatry, in this case of Saturday Night Live's Elon Musk, has literally gone to the moon.

Unfortunately, equities (these days) are not going to the moon - the majority of stocks (particularly of a high beta/octane kind) are now falling dangerously back through the atmosphere and, unlike the Chinese rocket that pounded into the Indian Ocean on Saturday evening, seem destined for an even more violent crash on land.

(This commentary originally appeared on Real Money Pro on May 12. Click here to learn about this dynamic market information service for active traders and to receive Doug Kass' Daily Diary and columns from Paul Price, Bret Jensen and others.)

Get an email alert each time I write an article for Real Money. Click the "+Follow" next to my byline to this article.
TAGS: Earnings | Economy | Investing | Markets | Stocks | Trading