On Thursday I provoked a lot of conversation from some of my friends in High Places with this column posted late in the day that packed some power in only a few paragraphs:

A Few Naive Questions About 'Transitory'

How is "transitory" inflation (high) price stability? Is the Fed violating a core tenet of its mandate? Can they make their own mandate now?

My guess is the answer to all of this is the Fed is no longer an independent entity and has become entangled in politics. Further, the Fed has its own version of cancel culture. Follow doctrine, you are acceptable as an economist, and you become part of the group. Disagree, well you are just an old school curmudgeon stuck in the dark ages and you don't get a seat at the table. Mix that with the aforementioned lack of independence and politicization of the Fed, and you have a dangerous condition.

P.S. - Interesting from the State of Montana

With regard to my last point about the Fed no longer being independent of the Executive Branch, this little ditty hit the wires late in the day -- and it probably was the reason the market bounced right into the close as the headlines hit.

Fed Chair Powell, who has already been far too accommodative, is clearly getting pressure to remain more than highly accommodative and support aggressive fiscal policy as well by continuing to monetize our debt. At a minimum these little leaks are one more warning shot across the bow, "toe the line or you will be replaced."

Lael Brainard as a Potential Biden Replacement for Jay Powell

Further to my point about lack of Fed independence -- in addition to them ignoring their own mandate -- appointing Yellen to run Treasury, given she was the former head of the Fed, also crosses a dangerous line with regard to the theoretical independence of the Fed.

Then this article below.

Full of contentions like this, "how the Federal Reserve manages the economy must be part of the Administration's policy vision as it decides who will lead the central bank," Fed Up urges the White House to back legislation to require the Fed to discuss racial employment and wage gaps twice a year, and what steps it is taking to eliminate them, and to create Fed Accounts to provide access to lower cost financial services and the more efficient distribution of federal benefits and aid. The proposal calls for standing Fed credit facilities to support real economy investment, not just financial markets in emergencies, and for more oversight over the lightly regulated financial sector that engages in bank-like activities. Finally, the group calls for more diversity among the Fed's leadership and regional bank boards." These guys more or less want the Fed to become progressive policy advocates. (Disclosure to readers, I am a Progressive Democrat!) That is clearly NOT part of the Fed mandate.

The plot seems to be badly lost among many now. Then again the Fed seems to be setting their own mandate now, so why stop here? Oversight of the Supreme Court? Becoming a 51st state? Taking over the CIA and FBI and Justice Department? Educational policy?

Lastly, back to Lael Brainard. The latest financial stability report -- where she is one of the more influential authors -- contained the following quotes. Isn't it ironic? Put policy in place that causes excessive risk taking, but then warn that all the risk taking in turn could lead to broader stress on the financial system should said risk appetite reverse.

So are they trying to tap the brakes OR is this an admission that they cannot tap the brakes and must do more of the same to make sure risk taking accelerates to ludicrous speed? This is sort of how Ponzi schemes and drugs work. You always need more, or it comes undone.

Prices may be vulnerable to "significant declines" should risk appetite fall, the Fed report noted:

* "...Should risk appetite decline from elevated levels, a broad range of asset prices could be vulnerable to large and sudden declines, which can lead to broader stress to the financial system."

* "Indicators pointing to elevated risk appetite in equity markets in early 2021 include the episodes of high trading volumes and price volatility for so-called meme stocks -- stocks that increased in trading volume after going viral on social media," the report said.

The latest Financial Stability Report provides valuable analysis to track increases in financial system vulnerabilities. I would highlight a few areas. Vulnerabilities associated with elevated risk appetite are rising. Valuations across a range of asset classes have continued to rise from levels that were already elevated late last year. Equity indices are setting new highs, equity prices relative to forecasts of earnings are near the top of their historical distribution, and the appetite for risk has increased broadly, as the "meme stock" episode demonstrated. Corporate bond markets are also seeing elevated risk appetite, and the spreads of lower quality speculative-grade bonds relative to Treasury yields are among the tightest we have seen historically. The combination of stretched valuations with very high levels of corporate indebtedness bear watching because of the potential to amplify the effects of a re-pricing event.

The FSR describes the failure of Archegos Capital Management and the associated losses at a number of large banks. It highlights the potential for nonbank financial institutions such as hedge funds and other leveraged investors to generate large losses in the financial system. The Archegos event illustrates the limited visibility into hedge fund exposures and serves as a reminder that available measures of hedge fund leverage may not be capturing important risks. The potential for material distress at hedge funds to affect broader financial conditions underscores the importance of more granular, higher-frequency disclosures.

With investors ebullient on expectations for a strong rebound, it is important to closely monitor risks to the system and ensure the financial system is resilient. With valuations and risk appetite at elevated levels, strong microprudential safeguards and macroprudential tools such as the Countercyclical Capital Buffer will be important to address risks to financial stability and enable monetary policy to focus on its maximum employment and average inflation goals.

Getting Back to My Concerns In Thursday's Column

My concerns are multiple:

Considering that our government now appears willing to to pay for free community college, pre-school, childcare and those are all brand new entitlement programs, the debt buildup will only accelerate further on top of the initial spending.

Below is a chart of U.S. Treasury marketable debt since 1975 from Peter Boockvar.

Again, the debt build up is not really transitory. 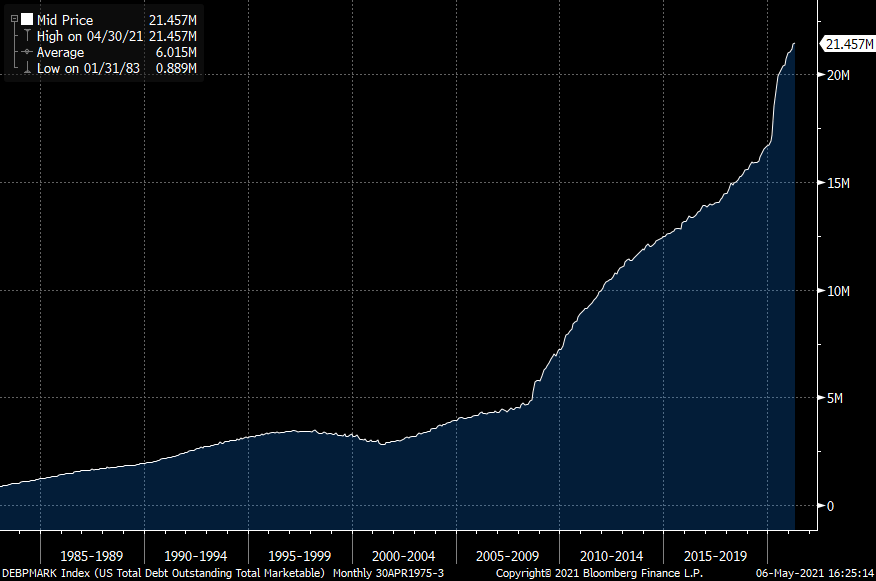 (This commentary originally appeared on Real Money Pro on May 6. Click here to learn about this dynamic market information service for active traders and to receive Doug Kass's Daily Diary and columns from Paul Price, Bret Jensen and others.)

Get an email alert each time I write an article for Real Money. Click the "+Follow" next to my byline to this article.
TAGS: Economic Data | Economy | Federal Reserve | Interest Rates | Investing | Markets | Politics | Stocks | Technical Analysis | Trading