When both equities and bonds are correlated in price and move lower in tandem, markets are exposed and, as we have seen recently, vulnerable to wholesale liquidation across all asset classes.

A vicious cycle of lower prices, redemptions and liquidations has overwhelmed our markets and has contributed to the schmeissing of the most crowded trades and of the market as a whole. The good news is that there is some "artificiality" to the degrossing - the selling is finite, it won't last forever.

Moreover, contrary to the consensus view, we now have some monetary policy certainty - and the market typically likes certainty. The return of corporate buybacks could be supportive to the markets over the next month.

"Speculation is the most dangerous when it looks easiest."

I want to move away from the obvious (consensus) concerns of the growing geopolitical threats, a more hawkish than expected central bank community, the likelihood of persistently high inflation and a slowing rate of global economic growth ("slugflation") and still inflated corporate profit expectations.

I have long cautioned that the evolution of market structure poses one of the biggest threats to the markets - as a factor it has been ignored by most strategists and money managers.

I have previously identified the two decade evolution from active management to passive management - the popularity and exponential expansion of the number of ETFs and the dominance of quant strategies and products (such as risk parity) - as a potentially toxic cocktail for the markets, particularly as the hawkish pivot by the Federal Reserve delivers a rising interest rate environment.

It has been estimated that over 70% of trading activity is produced by passive strategies and products.

Many of the quant strategies in particular, like risk parity, are very levered. But, with both bonds and equities - the two asset classes and components in risk parity - moving the same sutherly direction, risk parity portfolios are being liquidated en masse. And so are the most crowded "growthy" trades being forced to liquidate by many hedge funds - facing redemptions - and with awful 2022 returns.

The correlated price action of bonds and stocks is even hitting the 60/40 strategy: 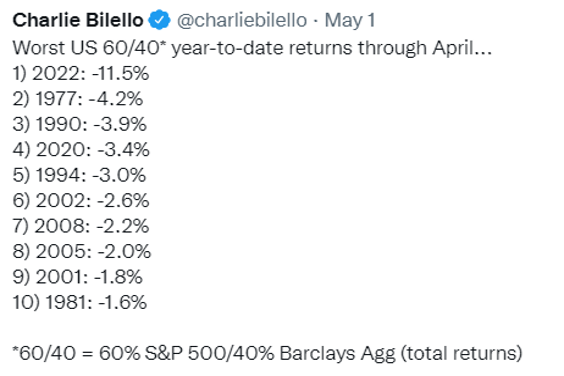 Another contributing factor to the market's decline besides the obvious, inflation, has been the return to post Pandemic conditions which has uncovered the magnitude of the pull forward - something I have warned about for over a year. Tightening financial conditions and a turn to reduced liquidity have also put a dagger in the heart of speculation.

As I noted earlier, from Warren Buffett:

"Speculation is the most dangerous when it looks easiest."

Such was the case in 2020-21 - when speculation was sublime, seemed easy and everyone was "doing it."

Many ETFs, like (ARKK) , and hedge funds like Coatue and Tiger Management failed to identify the risks of economic normalization and the adverse fall off or deceleration in demand post Covid. The later two hedge funds are likely examples of those that have been liquidating assets.

As I noted this week, the poster boy of concentration in yesterday's growthy favorites, CAS Investment Partners - with their outsized tie to Carvana - have been devastated by "staying too long" with a concept that thrived during Covid but borrowed from the future sales and profits.

As stated earlier, for over a year I have been vehemently warning about the risks associated with speculative stocks and gewgaws.

A man who tries to carry a cat home by it's tail will learn a lesson than can be learned in no other way - in the case of the markets, the 2021-22 decline in speculative stocks has been historic and painful.

I covered the impact on liquidity and speculation in this playful post written in early March, 2021.

But, let's end this column with some good news.

Historically, selloffs typically start with selected sector price weakness - they end with panicky and forced wholesale liquidations of every sector and every asset class.

When you see the current wholesale liquidation - governed by one's P&L and not by one's analysis - across all the crowded trades and in all asset classes (stocks, bonds, cryptocurrencies) - this is typically associated with the end and not the beginning of a selloff.

As we look through the forced selling and into the next few weeks we actually face more certainty than many suggest and a possible setting for a lower VIX.

After all we know for almost certain that the next Fed meeting will be uneventful - there will be, with certainty, a 50 basis point hike in interest rates - not 25 bps, nor 75bps.

After next Wednesday's CPI release, the catalyst calendar and macro are very light.

And, we will have the reemergence of corporate buybacks to look forward to.

(This commentary originally appeared on Real Money Pro on May 6. Click here to learn about this dynamic market information service for active traders and to receive Doug Kass's Daily Diary and columns from Paul Price, Bret Jensen and others.)

Get an email alert each time I write an article for Real Money. Click the "+Follow" next to my byline to this article.
TAGS: Economic Data | Federal Reserve | Interest Rates | Investing | Markets | Rates and Bonds | Stocks | Trading | Treasury Bonds