Rahim explained that Juniper has been transforming itself over the past year, doubling down on cybersecurity. This quarter saw 10% growth overall including in every geographic region and customer segment.

Rahim said they're very excited for the company's 5G wireless roll out. He said Juniper has equipment to handle the transport and security of 5G wireless.

Cramer said that with almost a 4% dividend yield, he likes what he hears from Juniper Networks. Let's check out the charts and indicators of JNPR to see if traders have the same sentiment.

In this daily bar chart of JNPR, below, we can see that prices have sprinted higher since the middle of March. Prices briefly traded above the declining 200-day moving average line but have quickly turned down.

Trading volume has been heavy in recent days with the On-Balance-Volume (OBV) line weakening. The Moving Average Convergence Divergence (MACD) oscillator is poised to cross to the downside for a take profits sell signal.

In this weekly bar chart of JNPR, below, we can see that prices have been in a weakening pattern from early 2017. The recent rebound in prices pushed JNPR briefly above the declining 40-week moving average line - something that has happened a number of times over the past two years.

The weekly OBV line shows a slow decline from early 2019. The trend-following MACD oscillatory has been below the zero line since early 2019 and only recently crossed to a cover shorts buy signal.

In this daily Point and Figure chart of JNPR, below, we can see that the software is projecting a potential downside price target in the $19 area. 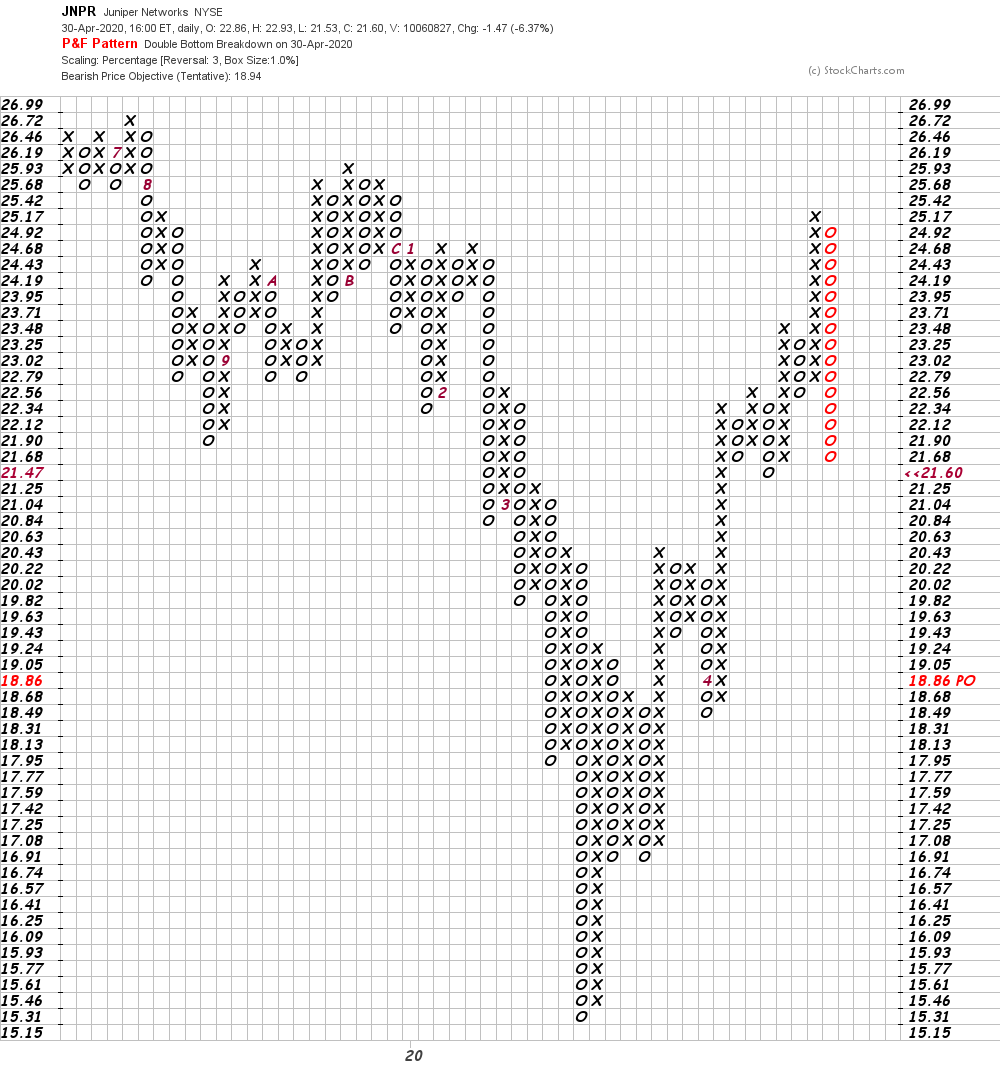 Bottom line strategy: The rally failure at the key moving averages and a downside price target from our Point and Figure chart tell me that the price of JNPR can correct further to the downside. Avoid the long side for now.

Get an email alert each time I write an article for Real Money. Click the "+Follow" next to my byline to this article.
TAGS: Earnings | Investing | Stocks | Technical Analysis | Trading | Cybersecurity | Technology | Technology Hardware & Equipment | Mad Money | Executive Interview