For a bit more than a week, I have been eyeing the early part of July as the point in time that I believe the market will be overbought and sentiment would be too giddy. I think we have arrived at that point in time.

First, the market is overbought on a short term-basis. Last week we looked at the math behind the Oscillator, because it was languishing so close to the zero-line, but after the rally in the latter part of the week, we can now see the overbought condition on the chart. Once again, the math behind it (we will now drop a string of positive numbers) says we are overbought. In addition, the intermediate term is overbought, as well.

Then there is breadth. Friday's lack thereof was so glaring it's hard to imagine most did not see it in their portfolios, if not the actual statistics. The net breadth on the New York Stock Exchange was flat as a pancake, with the S&P up 30-plus points. Nasdaq was worse with net breadth at negative 830. But for Nasdaq what was most glaring to me is that net volume (up minus down) was negative for the first time in nine trading days. That is the change. On the chart below, you can see the divergence quite clearly, with breadth having peaked in early June when the S&P was at 4,200 and is now far from that peak with the S&P at 4,350. 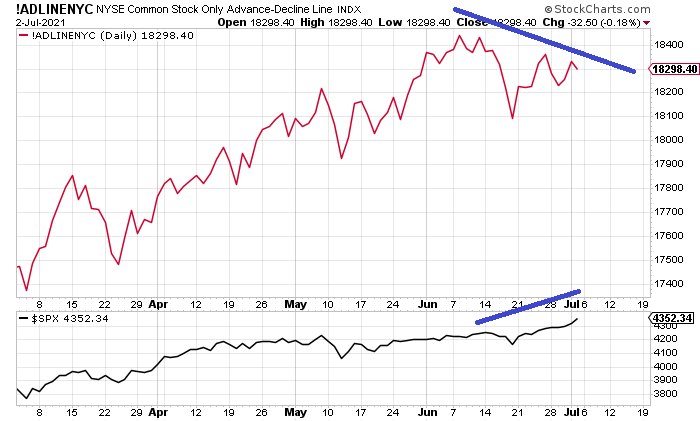 We know that the McClellan Summation Index has been heading downward since early June as well. About the only good news here is that it only needs a net differential of positive 300 advancers minus decliners to halt the month-long decline. The bad news is that typically a turn up after this long with the indexes already up is often short-lived.

There was a time late last year and early this year that we noticed a channel on the Invesco QQQ (QQQ) that was quite profitable from a swing trading perspective for a few months. There seems to be one developing now in the QQQs. Friday tagged the upper end of the channel. I don't think this channel is as pronounced as the one from November through February, but I do not think we can ignore it, either, especially since at the May lows sentiment was decidedly bearish for growth/tech and is now decidedly bullish for that group.

One reason I had been eyeing early July as a point for a pullback is because I believed sentiment would get giddy around this point. And it has. The Daily Sentiment Index (DSI) for Nasdaq and the S&P have both moved to 91. The last time both were over 90 at the same time was late August 2020 as we headed into that peak. As a reminder readings over 90 and under 10 are ones I consider extreme.

The American Association of Individual Investors (AAII) saw a jump of 8 points for the bulls last week to 48%. The Investors Intelligence bulls are now kissing 60%. The National Association of Active Investment Managers (NAAIM) whose exposure near those lows in the QQQs were at 44 is now back over 90.

Even the 10-day moving average of the put/call ratio is closing in on the lows. A turn up from here is often associated with a pullback in the market.

What can make us pullback? I have no idea. If I knew it would probably already be priced in.

They Don't Call It 'Crude' for Nothing

Unfortunately for crude oil bulls, corrections are rarely soft landings. They tend to bring a considerable amount of pain and chaos.