Bank earnings are hitting the tape fast and furious this week. Thus far, it has been Goldman Sachs (GS) getting the best of the price action. JPMorgan Chase  (JPM) kicked off Tuesday with a solid report. The company beat EPS estimates by $0.32 with a $2.82 bottom line. Revenue of $28.8 billion "missed" estimates of $28.9 billion, but does anyone care? It's not a miss. You know it. I know it. Wall Street really needs to adopt a margin of error formula to misses and beats, especially for revenue.

Making sense of bank earning is a Herculean effort. This is a sector I do play purely on historical action, technicals, and the consumer. JPMorgan likes the consumer, history is on the side of the stock, and the chart doesn't look half bad. In short, I'm expecting the stock to drift higher over the next three weeks. 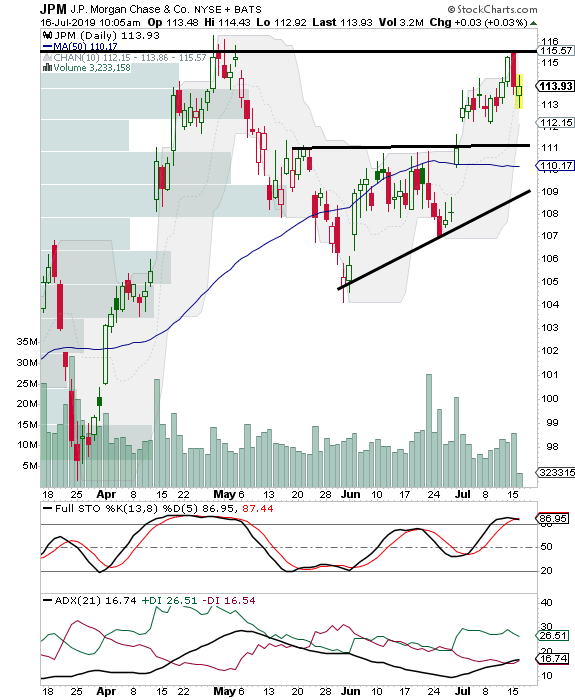 JPM bulls will face resistance around $115. After the fade yesterday and the rejection from that level to end April, a double-top is firmly in place. A third attempt should find success, but conservative traders will want to wait for a close above $115.60. While the Full Stochastics is oversold, the concern doesn't come until we see a cross below the 80 level. Overbought can stay overbought. It is when it moves from overbought to normalized that we need to be concerned. Support should come in the form of the recent gap, so downside should only be $2-$3 before the stock bounces. If that does fail, there is additional support just $1-$2 lower.

History may be a stronger guide to nibbling at JPM at the end of the day. Over the past nine earnings reports, the stock has been higher three weeks later eight times as compared to the first day post-earnings close, and it hasn't mattered if JPM had finished the day red or green. The one red move over that following three weeks landed down 2.5%. That happens to be the current support level on the daily chart.

Whether it is a buyer of the stock, seller of bullish put spreads, or buyer of call spreads, long is where you want to be post JPM earnings.

(Goldman Sachs and JPMorgan are holdings in Jim Cramer's Action Alerts PLUS member club. Want to be alerted before Jim Cramer buys or sells GS or JPM? Learn more now.)

Get an email alert each time I write an article for Real Money. Click the "+Follow" next to my byline to this article.
TAGS: Earnings | Investing | Stocks | Technical Analysis | Trading | Banking | Financial Services | Stock of the Day

The world's most valuable automaker reported fourth quarter earnings on Wednesday night. The results speak for themselves.