JP Morgan Chase & Co. (JPM) has been under selling pressure since late September. Prices have come down and trading volumes have increased which can sometimes marks a low but is that enough to generate a reversal and recovery into 2019?

Let's review the charts and indicators to see if a strengthening phase is coming.

We noted the heavier volume of trading this month but we cannot ignore the movement of the daily On-Balance-Volume (OBV) indicator which shows a peak in February and a decline to December, telling me that sellers of JPM have been more aggressive for several months and that is not is not a good sign at all.

The trend-following Moving Average Convergence Divergence (MACD) oscillator is in a sell mode below the zero line but the two moving averages that make up this indicator have begun to narrow. This may or may not foreshadow a crossover in the days ahead.

In this weekly bar chart of JPM, below, we can see what looks to be a top formation from late 2017. Prices stayed above the rising 40-week moving average line for most of the last three years but the slope of the line has turned down and prices have been below this longer-term indicator the past three months.

The weekly OBV line shows a peak in January 2018 and a long decline with new lows made recently. This suggests that a significant amount of liquidation (selling) has occurred.

The weekly MACD oscillator crossed to the downside back in February and moved below the zero line this October for an outright sell signal.

In this Point and Figure chart of JPM, below, we can see a year-long distribution or top pattern. A downside price target of $94.73 is indicated which does not sound so bad but it could precipitate further losses. 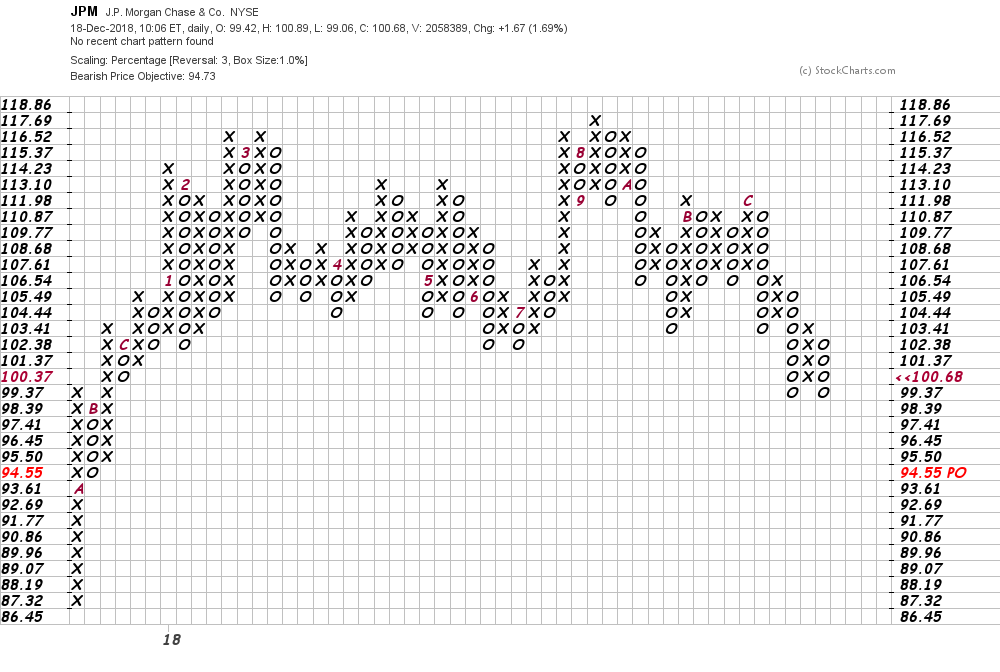 Bottom line strategy: I don't know what tomorrow will bring with the price action or the economic news or the shape of the yield curve, but right now JPM looks bearish and a bounce or rebound is not likely to go very far, in my opinion.

Get an email alert each time I write an article for Real Money. Click the "+Follow" next to my byline to this article.
TAGS: Investing | Technical Analysis | Trading | Banking | Financial Services | Brokerages