JPMorgan Chase & Co. (JPM) released its Q2 earnings' numbers Tuesday morning and it is the "Stock of the Day" at Real Money. Let's check out the charts and indicators.

Trading volume increased in the second half of June and overall the past six weeks the On-Balance-Volume (OBV) line has shown only a very modest rise which suggests only a slight increase in buying.

The Moving Average Convergence Divergence (MACD) oscillator is slightly above the zero line which indicates that the trend is positive but certainly not particularly strong.

In this weekly bar chart of JPM, we can see that prices are above the 40-week moving average line but the slope of the line has not turned positive.

The weekly OBV line shows a low in March followed by some modest improvement. The MACD oscillator on this longer time frame is in a positive mode.

In this Point and Figure chart of JPM, below, we can see a very bullish longer-term price target of $151. A decline to $106.54 would weaken this chart. 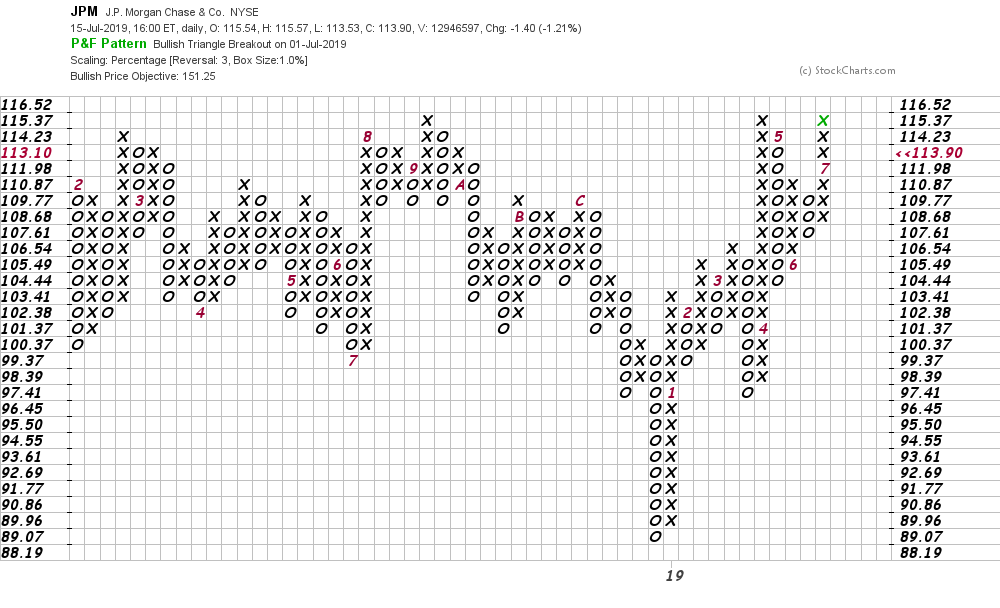 Bottom line strategy: Within the financial sector people seem to look to JPM for leadership. Prices have been in an uptrend from late December but the rally has weakened in recent weeks stopping short of the late April/early May highs. Prices may be in for a period of sideways to lower movement in the short-term.

Get an email alert each time I write an article for Real Money. Click the "+Follow" next to my byline to this article.
TAGS: Earnings | Investing | Markets | Stocks | Technical Analysis | Trading | Banking | Brokerages | Stock of the Day