Is it now time to start buying Johnson & Johnson (JNJ) ?

The shares of health care giant Johnson & Johnson have been under pressure since hitting a peak of $186.69 back in late April. Those shares closed on Friday night at $168.18, down 9.3% from that top. The news has been steady. A steady drumbeat of negativity mind you.

From the US government announcing its intention to halt its purchases of Covid-19 vaccines (not that JNJ wasn't prepared for this) to the firm's announcement that it would no longer sell talc-based baby powder globally, to the Biden administration's new law permitting some drug prices to be negotiated (another item that will not shake JNJ), to this morning's news...

Apparently, JNJ will employ the strategy used in Texas and in other states as well, to create a subsidiary to hold all of the firm's talc-related liabilities and then place that subsidiary in bankruptcy protection. Don't like it? It does preserve equity valuation.

Johnson & Johnson posted the firm's second quarter earnings. The firm printed an adjusted EPS of $2.59 on revenue of $24.02B. These numbers beat expectations on both the top and bottom lines. The revenue print was good enough for year over year growth of 3%, or 8.1% on an adjusted operational sales basis. Regardless, JNJ did beat Wall Street. Globally, these sales numbers suffered from a 5% negative currency exchange rate related impact.

Overall, it was a solid quarter. The Pharmaceutical and Consumer Health segments beat Wall Street, while the MedTech segment fell slightly short of expectations. The guidance was, however, muted.

For the full year, JNJ maintained guidance of $97.3B to $98.3B for operational sales, which would work out to adjusted operational sales growth of 6.5% to 7.5%. JNJ did reduce its estimate for "reported" sales to $93.3B - $94.3B due to a negative exchange rate impact. JNJ reduced its outlook for adjusted pre-tax operating margin to flat from a year ago from a previously guided to improvement of 50 basis points. As far as earnings, JNJ now sees an adjusted full year EPS landing in between $10.65 and $10.75, which narrowed the range by a nickel on each end without impacting the midpoint.

Back in November of last year, Johnson & Johnson announced the intention to split off its consumer division within 18 to 24 months creating two companies. Without going into detail, the move would allow JNJ to focus more on the higher margin pharmaceutical business, while the slower growth consumer-focused business could focus on kick-starting products centered around wellness and personal health. Sound far off, but if the split is on schedule, it's now less than 9 to 15 months away.

As of the end of that July quarter, JNJ had a net cash position of $32.568B, which was up from previous quarters, courtesy of free cash flow that reached $1.79 per share, which was a three quarter high and the second highest per share free cash flow print for the firm in six. Inventories reached $11.437B, dragging current assets up to $63.847B. Current liabilities, which have been stagnant, printed at $44.821B, placing the firm's current ratio at 1.42, which is healthy and up from 1.39 the quarter prior. Sans inventories, the firm's quick ratio comes to 1.17. That's also a healthy number.

On the other hand, total assets less intangible assets come to a slightly lower nominal value than total liabilities. I don't love that. At quarter's end, the firm's tangible book value came to $-0.08 per share. While I can't endorse that line running with a minus sign in front of it, this was the closest that JNJ had come to a positive tangible book value per share since the cows came home (2017).

I really think that the ball (stock) is starting to roll in the right direction. The fundamentals are improving. The balance sheet is not in bad shape at all. The stock trades at an undervalued 16 times forward looking earnings while paying shareholders an impressive $4.52 annually just to stick around. That's good for a yield of 2.55%. (Note, the stock is trading ex-div, payable Sept 6th today.)

In addition, the company appears to be as well managed under CEO Joaquin Duato as it was under now Executive Chairman Alex Gorsky. I really like the idea of owning the shares (you have time) prior to the split into two firms. 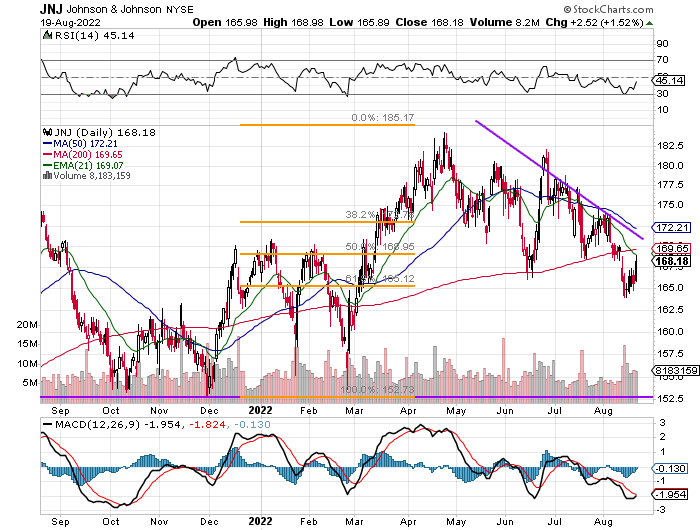 My opinion is that JNJ presents as an income paying defensive type stock that can probably be bought into broader market weakness as we trek into a period of increased uncertainty. My plan is to initiate upon stock-specific weakness. That could very well happen this morning. In a perfect world, I would like to add at the 61.8% Fibonacci retracement level of the December through April rally, and then add aggressively at the well established  $153 support level.

While I wait for my price, I see that September 16th JNJ $165 puts are trading around $1.75 and that November 18th JNJ $155 puts are going for a rough $1.95. That has my attention. Might consider making a sale and getting paid to wait for my pitch.

Get an email alert each time I write an article for Real Money. Click the "+Follow" next to my byline to this article.
TAGS: Earnings | Investing | Stocks | Technical Analysis | Trading | Healthcare