Johnson & Johnson (JNJ) reported its fourth-quarter numbers and guidance Tuesday morning. The share price of JNJ is trading up in early trading activity. Let's check out the charts and indicators through Friday's close to see if we want to follow this early price action.

In the daily bar chart, below, we can see the swift and hard decline for Action Alerts PLUS holding JNJ in December wiping out nearly all of the gains from late May to November. Prices have recouped a bit from the late December nadir but the technical indicators I favor have not improved all that much. Prices are below the flat 200-day moving average line but we could see a close above the line by the close Tuesday. But it will take more than a rally last Friday and Tuesday to turn the slope of the 200-day line positive. The slope of the 50-day moving average line is negative and intersects around $137 now.

The volume pattern suggests caution. You can see a big spike up in volume in December as prices plunged but since the price low the volume has been average suggesting that new buyers are not running in at these lower prices. The daily On-Balance-Volume (OBV) line has only been stable since December. A rising OBV line would be more encouraging.

The trend-following Moving Average Convergence Divergence (MACD) oscillator has crossed to the upside from below the zero line for a cover shorts buy signal but an outright go long signal is likely to be off in the future.

In the weekly bar chart of JNJ, below, we can see a mixed condition for the indicators and the chart action. The 10,000 feet view of the price action of JNJ is a broad sideways pattern the past two years with buyers showing up around $120 and sellers in the $145-$150 area. Prices are just below the flat 40-week moving average line and a small rally by Friday would give us a close above this longer-term indicator.

The weekly OBV line has been neutral the past two years but there is a decline in December and small "uptick" into January. The weekly MACD oscillator is on the zero line but it has started to narrow. A bullish crossover is likely to be a few weeks away.

In this Point and Figure chart of JNJ below, we can see a downside price target of $106.46 being shown. A rally to $133.94, however, will likely improve the chart. Prices held in an area of good volume (left scale) but there is also volume above the market that could act as resistance if these former buyers decide to turn sellers. 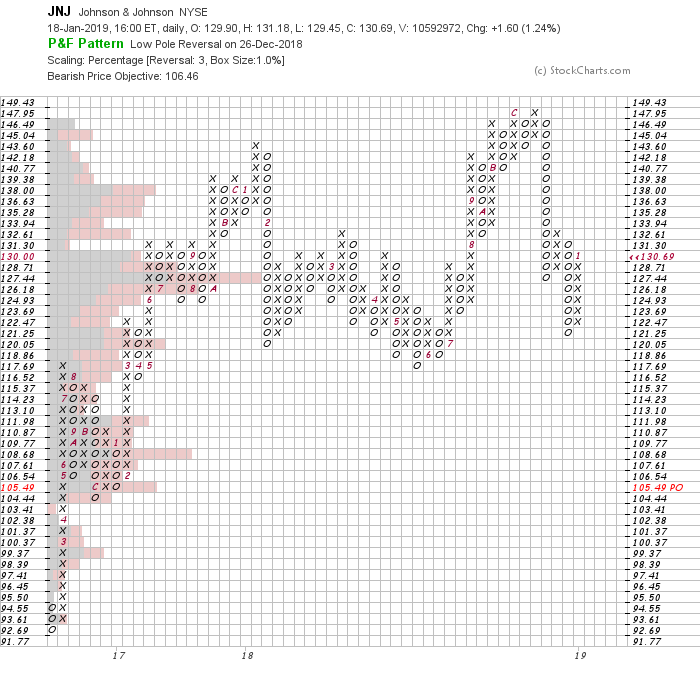 Bottom-line strategy: JNJ may have made its low in late December but it never really retested that low. Experienced traders could approach the long side carefully (i.e., with a risk point) but I would like to see more basing action before making a recommendation to go long.

Get an email alert each time I write an article for Real Money. Click the "+Follow" next to my byline to this article.
TAGS: Investing | Technical Analysis | Healthcare | Pharmaceuticals | Stock of the Day