"Never let the future disturb you. You will meet it, if you have to, with the same weapons of reason which today arm you against the present."

The month of January was over. The day was terrific for equity markets. The Nasdaq Composite gained 3.4% on Monday on top of Friday's 3.1% gain. Now, the index is down just a hair less than 9% year to date. The S&P 500 scored a Monday increase of 1.9% on top of Friday's 2.4% run. Our broadest large-cap index now stands down 5.4% for the year, despite having made a new all-time intraday high as recently as January 4th. The Nasdaq Composite has not made such a new high since the week of Thanksgiving, probably before many readers even heard of the Omicron variant (which is really now four sub-variants).

Most readers know that given how narrow the Dow Industrials are, that when considering broad large-cap health or lack thereof, I really focus on these two indexes with a peripheral look at the Dow Transports for a little focus on old-school economic health and the Nasdaq 100 for a more focused look at big tech. There is some good and some not so good to report in the wake of Monday's truly broad-based equity market rally. First, for both the S&P 500 and Nasdaq Composite January 2022 was the worst performing month since March 2020. January 2022 was the worst performing January for the Nasdaq Composite since 2008, and for the S&P 500 since 2009. So, it's been a long time since our market has gotten any year off to such a poor start.

More visibly, on the bright side, the Nasdaq Composite ... 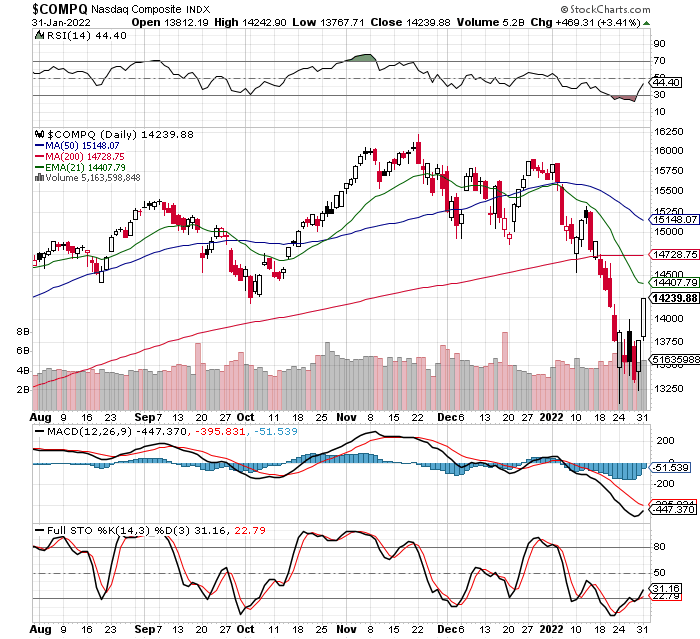 ... has retaken the 14,000 level with some vigor, and now sets its sights on its own 21 day EMA. Readers, a few of whom have asked if markets are becoming overbought too quickly, will note that for this index, even after these two sessions, sports an RSI (Relative Strength Index) just below neutral, and a Full Stochastics Oscillator just barely climbing out of still being in a technically "oversold" condition. All three components of the daily MACD (9, 12, and 26 day EMAs) remain in negative territory, and to top it off, the 12 day appears poised to, but is yet to... cross over the 26 day EMA, which is often a bullish signal. 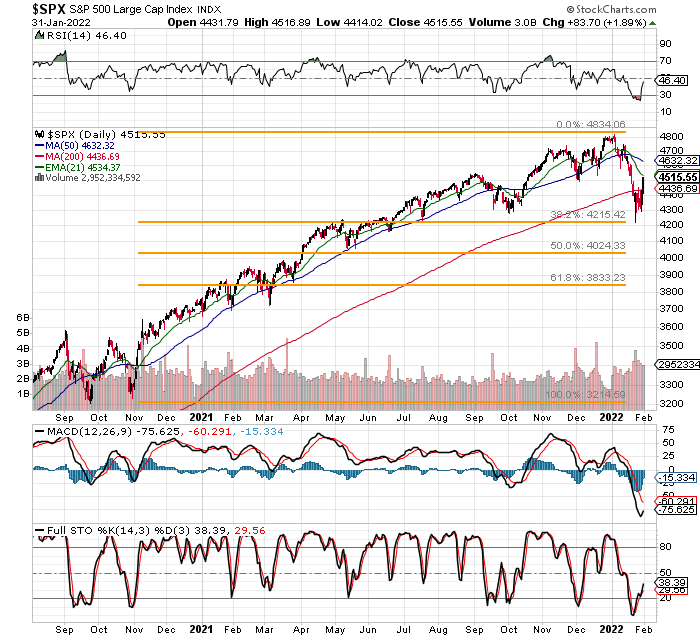 ... not only has the S&P 500 rebounded almost perfectly off of a 38.2% Fibonacci retracement level, courtesy of the November 2020 through January 2022 rally, but the index has recaptured it's own 200 day SMA (potentially huge) and approached it's 21 day EMA. This index also stands perhaps slightly close to still being oversold than it is approaching anything close to being overbought. The S&P 500 looks forward to a bullish MACD crossover as well.

Readers will now see that as the month of January ended, the index was indeed able to close above the lows of December. Significant? Perhaps psychologically. Perhaps algorithmically. That was the level (4495) that I was watching all afternoon on Monday, and I took it as overtly positive.

The spread between the US 10 Year and US Two Year continues to raise eyebrows.

As for measures of fear or perceived demand for protection, the VIX continues to fall, hitting levels below 25 overnight after approaching the 39 level little more than a week ago.

Interestingly, as the CBOE Total Put/Call ratio appears to have run sideways above its commonly used moving averages close to the 1.06 level, there has been a sharp divergence in the kind of protection sought. While demand for "index only" protection remained very high on the last day of January...

There was very little interest in buying single stock or "equities only" puts...

I see equity index futures trading lower overnight with most of Asia closed for the Lunar New Year. The above charts paint an optimistic picture. Sharp bear market rally, or the start of something good? Let's dig in.

You've been patient. This I know. I think I finally have something to tell you that you may want to hear. No promises. It's just the method I have used since forever, and it works more often than not. It can and sometimes does... fail. (Like that disclaimer?)

On Monday, all 11 S&P sector-select SPDR ETFs closed in the green, led by the Discretionaries (XLY) , up 3.85%, with "growthy" type sectors Technology (XLK) and Communication Services (XLC) both also tacking on more than 2% for the session. For those interested in the growth industry breakdown, the Philadelphia Semiconductor Index gained 5.44% on Monday, while the Dow Jones US Internet Index scored an increase of 3.03%, and the Dow Jones US Software Index picked up 2.49%. Incredibly small to midcap indexes outperformed large-caps for the day, outside of the Nasdaq Indexes. The Russell 2000 experienced an increase of 3.05%, while the S&P 400 gained 2.21% on Monday.

We have what I see as a change in trend. We have our "confirmation" on an "up" day on higher trading volume, without suffering a new low since last Monday's reversal. There can be no doubt (my opinion) in my military mind that professional money has gotten, even if cautiously more on board, more comfortable with exposure to risk. Jobs day is Friday. This may just be a temporary parting of the clouds, but it does have the feel of something more substantial. Do I think the new era of increased volatility is over? Not a chance. Do I think that this correction is over? Very likely that yes, the market is learning to live with itself within the constraints of uncertain forward looking policy in what has to be seen as a more dangerous planet on which to live than it was even a year ago.

Tempering of the Flame

In the wake of Atlanta Fed Pres. Raphael Bostic's interview at the Financial Times where much of the financial media (Most of you do read me, and you know who you are.) jumped on one quote that made Bostic seem much more hawkish than how he actually portrayed himself in the interview, the Fed was out in force on Monday to reinforce the concept of pragmatism in assessing the trajectory of future policy. On top of scheduled public appearances by San Francisco Fed Pres. Mary Daly and Kansas City Fed Pres. Esther George, Bostic himself appeared at Yahoo Finance, and Richmond Fed Pres. Tom Barkin made an appearance at CNBC.

Note that Daly and Bostic (until this weekend) have been perceived in the past as doves. George is perceived as the most hawkish official at the Fed, and Barkin has for the most part, been quiet on opinion. Of these four, only George is a voting member of the FOMC in 2022.

"You always want to go gradually, in the economy. It is in no one's interest to try to upset the economy with unexpected adjustments. But I do think the Federal Reserve is going to have to move deliberately in its decisions to begin to withdraw accommodation."

"When you're trying to get an economy from extraordinary support to one that's going to just gradually put it on to a self-sustaining path. you have to be data dependent. But you also have to be gradual, and not disruptive."

"We're not set on any particular trajectory. The data will tell us what is happening. I would adjust my policy to maybe not be as aggressive in terms of raising interest rates."

"I'd like the Fed to get better positioned. I think we've got a good part of the year to get there. That position is somewhere closer to neutral, certainly than where we are now, and I think the pace of that just depends on the pace of inflation."

Readers already know what I think. I think that inflation is either peaking right stinkin' now or darned close to it. I don't think monetary policy can do much to drive down inflation caused through pandemic induced scarcity at many levels, which is indeed what we have. The Fed does need to address the size of the balance sheet, and does need to get short-term rates off of the zero bound. Excess liquidity can be dangerous. Here it is the condition, not the catalyst.

Inflation caused through unnatural economic activity (we already know that velocity is not there) can not be countered in any way other than finding ways to address areas impacted by shortage. Higher borrowing costs will hinder job creation, wage growth and capital spending. We do have to move, policy does need to normalize. Just be careful what you wish for. Interest rates are not some magical potion, and caution is required.

The same pundits you see gyrating on television while calling for a 50 basis point move in March, and blame the Fed for being behind on inflation are the very same folks who would cast blame should the Fed tamp down inflation... along with economic activity, thus causing an outright recession.

(UPS, AMD, GOOGL, and SBUX are holdings in the Action Alerts PLUS member club. Want to be alerted before AAP buys or sells these stocks? Learn more now.)

Get an email alert each time I write an article for Real Money. Click the "+Follow" next to my byline to this article.
TAGS: Federal Reserve | Interest Rates | Investing | Markets | Stocks | Trading