Will this move up be the start of something sustainable or will it be just another bounce in a long running downtrend? Let's look at the charts and indicators again this morning.

In this daily bar chart of JCP, below, we can see that prices have been in a downtrend the past 12 months (even longer when we look at a weekly chart). Prices have stayed below the declining 200-day simple moving average line the entire time. JCP has stayed below the weak 50-day moving average line for most of the last year and only traded above that indicator for a few days at a time.

This year the 50-day line bottomed out and turned flat and finally JCP traded above it for more than a few days. The volume histogram just below the price chart shows that volume has increased during declines which tells us that traders and investors are acting bearishly.

The declining On-Balance-Volume (OBV) has been going down and down which tells us that sellers of JCP have been more aggressive than buyers.

The trend-following Moving Average Convergence Divergence (MACD) oscillator has spent most of the past year below the zero line or in bearish territory.

In late January JCP managed to move above the zero line for an outright go long signal but the two moving averages that make up this indicator are not in strong uptrends. These signals are not telling us that JCP has bottomed.

In this weekly bar chart of JCP, below, we can see a longer downtrend than on the daily chart. Prices have been below the declining 40-week moving average line since November 2016. The chart does not show any nearby support but it does show plenty of potential overhead resistance.

The weekly OBV line has been in a downtrend for the past three years but it has not made a new low since December.

The weekly MACD oscillator shows a slight improvement from January but it remains well below the zero line and an outright go long signal.

In this Point and Figure chart of JCP, below, we can imagine that prices trade up to $1.44 on the chart but it will take a trade at $1.52 to give us a minor upside breakout.

On the left side of the chart is a large bar at $1.76 indicating the amount of volume traded at that price. This is likely to be significant resistance and a roadblock to JCP making a comeback on the charts. 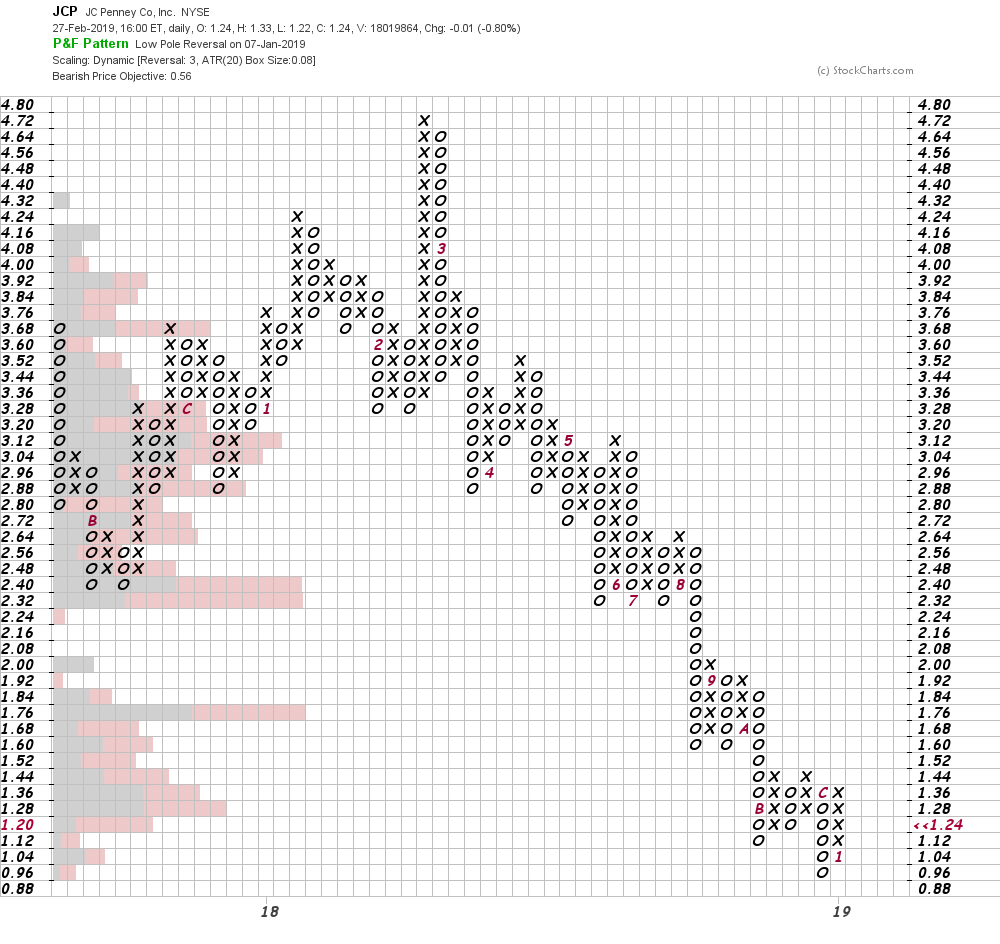 Bottom line strategy: Yes, JCP is bouncing. Some retail analysts may actually write something positive about the company, but technical turnarounds on the charts take months and months and more months. Prolonged downtrends are not reversed overnight and not in a few weeks. We might want to brag that we bought the bottom in JCP or some other name but the harsh reality of investing is that bottom-picking is not all that successful.

Get an email alert each time I write an article for Real Money. Click the "+Follow" next to my byline to this article.
TAGS: Earnings | Investing | Markets | Stocks | Technical Analysis | Trading | Retail | Stock of the Day

You Better Have a Game Plan for Nvidia

Profit-taking and rotation could be hurting NVDA, so play carefully to prevent this winner from becoming a loser.

The stocks that are leading are a completely different group than has led from the March lows.