Anyone else getting tired of the random, daily comments from Pelosi that talks are going well or hopes and expectations that a deal will be done before the election?

No. Just me? In all seriousness, it shouldn't be this hard. It will be though because it's more political than economical. And that's not a shot at Pelosi only. It's the process in general because it didn't take long for Pelosi to concede that although talks are going well and she wants a pre-election deal, it likely won't happen.

Initially, the market spiked after the Pelosi comments, but we gave back those gains in less than 20 minutes. Can we simply not do this in the middle of the day? Or maybe have collective thoughts before firing off headline-grabbers?

If you haven't already taken a serious look at gold, I think it is time here. The miners aren't bad either, but I'm looking at the SPDR Gold Shares (GLD) . If we get a stimulus, one would have to imagine it will pressure the dollar more than it already has. If we don't get a stimulus package, then we run the risk of an equity selloff and investors may turn to gold for protection. It lends some thoughts to Bitcoin as well, but that hasn't been an area of expertise in terms of long-term trading, so I'll withhold thoughts from a "fundamental" view. However, from a technical side, it is another commodity with a strong setup.

After a rough September, we have an ascending triangle that appears to be resolving to the upside. A close above $180 is an absolute must. If equities rally, we may see GLD fail to hold $180. At that point, traders would be best served to wait another day. A close above $181, which also puts GLD above its 50-day simple moving average (SMA), should trigger a just-before-the-bell entry. 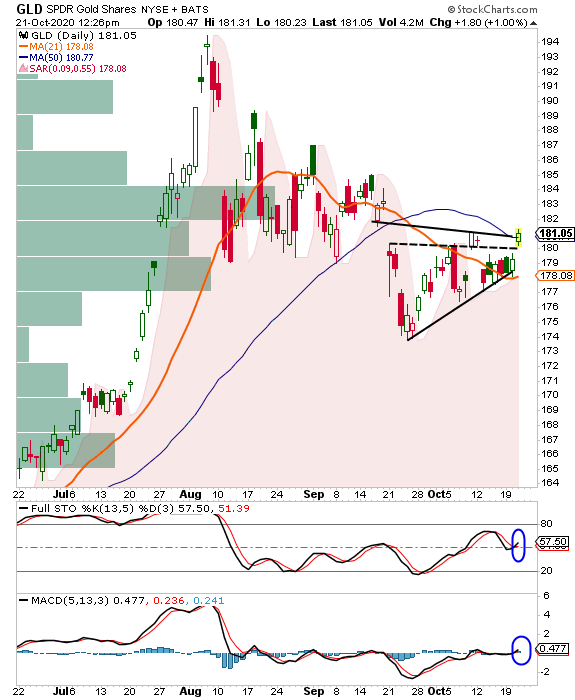 One thing is for sure, I'm not terribly comfortable being long or short right now. I prefer a heavy cash position and using that cash for intraday scalps. I'm not worried about a huge gap higher that runs away from me. I can chase a bit with the cash, but this approach allows me to sleep at night, so it's what I'm using for the next few weeks until we have more information.

Get an email alert each time I write an article for Real Money. Click the "+Follow" next to my byline to this article.
TAGS: Commodities | Gold | Investing | Markets | Stocks | Technical Analysis | Trading | Metals & Mining