I feel like we're making the Deutsche Bank (DB) story more complex than it needs to be for the sake of headlines. DB is recreating itself. In fact, it is recreating a bank that is a bank.

Okay, so maybe that's oversimplifying it.

DB is shutting down its global equity business as well as scaling back its investment bank, and even cutting some of its fixed income operations. They are going so far as eliminating some institutional clients. It's a damning admission DB can't compete, at least profitably, with investment banks on Wall Street. That being said, it's not the end of the line for DB.

So the company is chopping 18,000 jobs at the cost of 7.4 billion euros. Expectations for the jobs cuts were discussed back on June 28. Bloomberg reported that DB planned on cutting up to half its equities jobs while the Wall Street Journal noted the company could target between 15K-20K job cuts; therefore, the 18k number shouldn't come as a shock. Maybe the Q2 loss of 2.8 billion euros is the big drag, but I don't think so as this transformation will likely get DB back to a position of market or above-market profitability.

The weight on the stock Monday morning might have everything to do with wording. DB is setting up a "bad bank" to unwind unwanted assets. Some folks hear the words "bad bank" and their mind plunges into the reminiscent fear of the financial crisis. Stay with the idea of simplicity, the term "bad bank" is semantics. DB is setting up a way to separately track its current asset performance from those which it no longer intends to hold. There's no way the company wants to dump tens of billions of derivatives with a notional value of hundreds of billions of euros onto the market at once. That would be a disaster. The bad bank will provide analysts and investors with a clear understanding of performance moving forward. We'll better be able to determine how the reboot is doing.

Over the past year, it's been a straight line lower for DB. The company has lost half its value since the end of the 2018 first quarter. The bearish channel has tightened some since the fourth quarter of 2018. While we've seen strength in the secondary indicators, price has been key. Buying the support and selling the resistance has been a winning trade for 15 months. That means I'm not a buyer here unless we test support in the mid $6s or see a weekly close above resistance at $8. 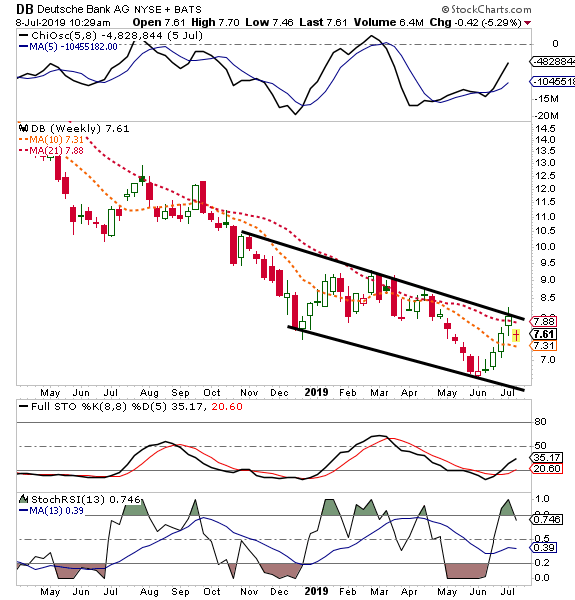 In other words, let someone else play the hero here on DB. If we see a weekly close above $8, then I'd be a buyer looking for $9. If we test the lower support levels around $6.50, then I'd also be a buyer and target $7.50 for profit taking. Given the beaten down nature, I'm not a short player on DB, so I will set some alerts and keep a loose eye on the name week to week but nothing more.

Get an email alert each time I write an article for Real Money. Click the "+Follow" next to my byline to this article.
TAGS: Investing | Markets | Options | Stocks | Technical Analysis | Trading | Banking | Financial Services | Stock of the Day