Halliburton (HAL) begins the week enjoying a relief rally. The company's earning per share number of $0.34 landed inline with Wall Street's expectations while the third quarter revenue number of $5.6 billion landed a few hundred million shy of estimates. Normally these wouldn't be results that would spur a 6% rally, but HAL's recent stock performance priced in very low expectations.

North America appears to blame on the 6% quarter-over-quarter declines, and I don't get the feeling that will change any time soon. Management stated they are focused on cash flow and shareholder value. In other words, growth is dead for the foreseeable future. Domestic growth that is as internationally, HAL is projecting high single-digit growth.

Shares received price targets reductions from five different big bank analysts over the past two weeks. This coming on the heels of 650 job cuts in the oil field services amid weakening prices. While that only accounts to around 1% of the workforce, recall HAL cut 8% of its employees earlier this year.

I have conflicting thoughts where we'll stand after the close today. The stock is down 30% year-to-date, but showing strong free cash flow, still profitable, paying a dividend well below cash flow (no risk to a cut), and trades at a low price-to-earnings. Those are positives, but with the prospects of growth declining to net zero near term, the lack of buybacks, and the post-earnings trading history, it is difficult to get excited about upside potential.

Post-earnings has been a struggle for Halliburton over the past 2.5 years. The stock has been lower seven out of 10 times three weeks post-earnings. Three of those times, it has been down by 16.5% measuring after the first-day post-earnings. The past year has been particularly rough with fades of 19%, 16.5%, 4%, and 5%. The trickle of moves higher have been in the low single digits. We are talking about what it looks like three weeks from today's close, not Friday's close, so that's important to note. 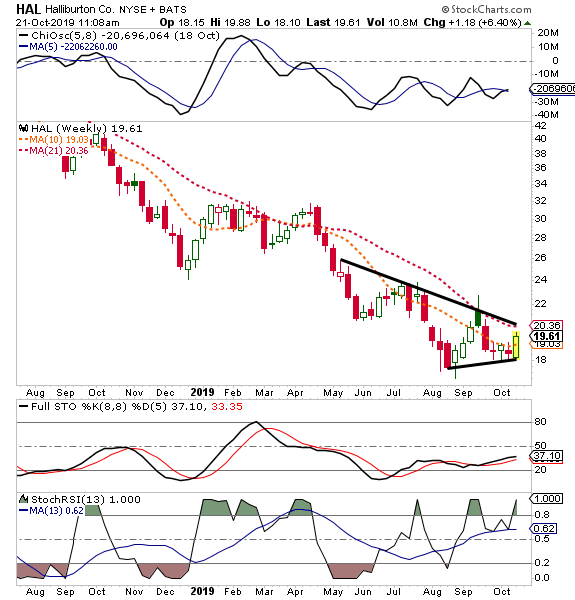 From a technical side, the stock could look a lot better above $20.50 at the close of trading this week. We're in a range of $18 to $20.36 right now, and I have a hard time seeing the $17.50 to $18 area fail to hold after the test in August. Still, that should be your line in the sand if you are long. If I had no position, I would consider a long above $20.50 or in that $17.50 to $18 area with $17 as a stop. That wouldn't result in a huge risk for buying a test of support. Despite the poor post-earnings historic action, I don't have any inkling to go short HAL this far in the hole. I'll wait for long triggers and sit it out until we get one.

Get an email alert each time I write an article for Real Money. Click the "+Follow" next to my byline to this article.
TAGS: Earnings | Investing | Options | Stocks | Technical Analysis | Trading | Oil Equipment/Services | Stock of the Day