Going back a number of years, there were two stocks that as a trader... I would short regularly with the intention of bringing home large winnings. These stocks were Tesla (TSLA) and Netflix (NFLX) . Both report this week. Tesla on Tuesday, Netflix on Wednesday. Going into minor detail. Those Tesla shorts, though there were a few wins, usually cost. I touched the flame. It burned. I learned. The vast majority of my positions in TSLA over the past two years or so have been on the long side, in fact I am long right now. Every one of those trades was a winner by the way. Can't beat 'em, join 'em. Easy enough. It seems.

Now, Netflix is different. Yes, I have shorted the stock, and made big public calls from the short side. The stock has almost always gone up. The difference is, with NFLX, I almost always got away with it. Unlike TSLA, where I would get burned when I was wrong, NFLX always offered me enough down days on the way up, so that I might bail myself out. I am getting that urge once again. Obviously, Netflix has been a big "stay at home" winner. Obviously any kind of stimulus package will put a big under most stocks, including those already considered leaders. Still, I have an idea. Let's dig in.

Last Week, Netflix traded up near the stock's July highs, prior to selling off. In fact, Netflix had a down week, even though the major Nasdaq equity indices had up weeks, even though internet stocks as a group outperformed their sector (Communications Services). The company caught some kind words and a higher price target ($600 to $630) from highly rated Morgan Stanley analyst Benjamin Swinburne. Swinburne sees Netflix as benefiting from a competitive moat from where the firm can take advantage of its pricing power over consumers. There is an industry wide expectation that Netflix will raise prices this spring. Will they? Can they?

I think I disagree. Of course, there's a tremendous level of competition in this space. Netflix now competes with Disney (DIS) Plus, Hulu (also controlled by Disney), Amazon (AMZN) Prime, Apple (AAPL) TV Plus. and moving on... AT&T (T) , Comcast (CMCSA) , etc. The list goes on. So far the U.S. consumer for the most part has not had to make decisions. If they like them all, they have them all. What if the U.S. consumer starts making cuts? What if the U.S. market is nearly saturated. Sure Netflix still has tremendous international growth, but margin is far lower outside of North America. It's not even close.

Netflix, depending on region, can sometimes only charge half or even one-third internationally what they charge at home. There are estimates the total addressable U.S. market might be just 90 million subscriptions. Well, Netflix is already in the mid-70 millions' Domestic growth. Unless I am mistaken (which is always possible), Netflix is reaching a point where all of the low hanging fruit has been picked. It gets tougher now. Raising prices may cost the firm it's highest paying customers, leaving the firm in a dominant position in places where it remains more difficult to turn a profit.

I am not predicting the end of Netflix. Far from it. I do think that the competition will only grow, and the pressure on pricing will be in a different direction than the firm, and investors are guessing. Then, on that happy day when the sun shines, children sing, vaccines work, and so do therapeutics... then what? Folks are going to go outside, see friends, visit family. A lot.

Subscribers may not cancel on that day, but new customers sure will be hard to come by. Probably for a while. Taking a stock from the short side must be done carefully. This is the kind of name that can go $50 or $75 against even a thoughtful trader overnight. This is not for the faint of heart. 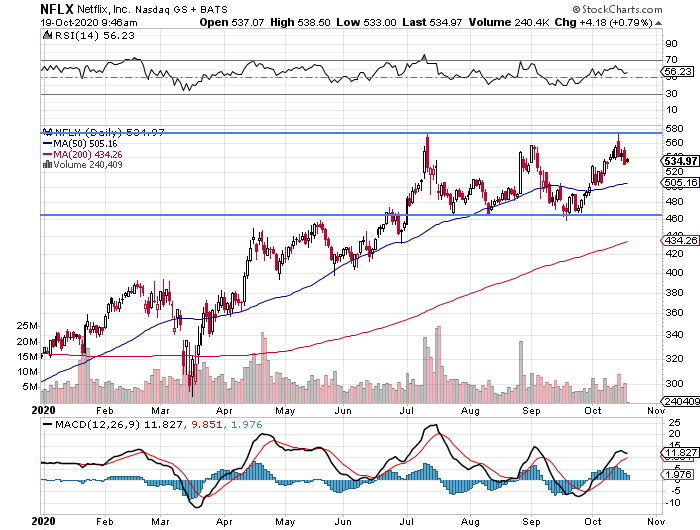 The shares of Netflix have been more or less stuck in a range, or basing pattern since breaking out in very early July. Support has been found four times now close to $460, while the stock has hit a brick wall at $575 twice. My thinking is that upon earnings these shares could test either one of those lines.

A breakout above $575 technically sends the shares more than $100 higher. I just don't trust it. My gut says NFLX sees $460 again before it sees $575. I may be wrong, but how to carefully play it is the question.

Note: This trade is not for everyone. By purchasing the upside protection should the short play be wrong, net basis is reduced to $512. The shares have to go $23 lower from here by Friday in order to break even. That said, the target is $460, and the trader can sell the call if committed to the trade. The risk is $2,300 over the course of the week.

(Disney, Amazon and Apple are holdings in Jim Cramer's Action Alerts PLUS member club. Want to be alerted before Jim Cramer buys or sells these stocks? Learn more now.)

Get an email alert each time I write an article for Real Money. Click the "+Follow" next to my byline to this article.
TAGS: Earnings | Economy | Investing | Markets | Stocks | Technical Analysis | Trading | Movie Production | Movies

Twitter's Charts Are Okay but They Can Do Better

There's not much strength here.

It doesn't hurt Liberty Braves Group that its Atlanta Braves franchise is in the World Series, though it already was doing well this year.

Expect a 'Just in Case' inventory model to become a theme in coming months.

Centene Is Rallying, but Don't Chase Its Shares

There is resistance overhead for the stock of the health plan operator after a spurt upward, so wait to buy it on a breakout over a key price.