If it seems as if I just wrote to you about the Walt Disney Co. (DIS) , it's true. That was just 10 days ago. So much has changed. So much has stayed the same over the entirety of roughly a week and a half. The shares have rallied significantly, with the broader market. At the time I penned that piece, Disney traded with a $95 handle. This morning, I see a $100 handle after the shares grazed $108 on Friday. Just a bit volatile.

Has there been a significant upgrade across the firm's business segments? With the exception of Disney+ (the streaming entertainment service) that has seen an explosion in new subscriptions in this environment and as the product has entered new markets such as India? No. The theme parks remain closed. In Asia, since February. In the U.S., and Europe, since March. The Disney Parks, Experience, and Products unit produced 37% of the entire firm's total revenue last fiscal year. On that note, Disney has announced the need to furlough 43K union cast members (employees) on top of an earlier announcement that the firm would need to furlough non-union workers. That already mentioned theme parks unit that includes corporate Disney Stores runs in normal times with a rough 177K cast members. The firm has agreed to maintain employee benefits including health insurance throughout the furlough up to 12 months.

Beyond the "magic" of the theme parks, there are the cruise ships that are not running, there are the cable television networks that do have plenty of content, but can not produce new scripted programming at this time, and thus are not driving as much in the way of advertising revenue. Speaking of those networks, even in decline the most profitable among the group has been ESPN. That's unfortunate. No live sports. No playoffs. I turned on Sports Center the other morning out of habit. They were covering video game basketball. Oh joy. I turned on the local news. I live in New York. That was even worse.

Did I mention the cinema? Across the various Disney studios, globally box office receipts made a 16% contribution toward total revenue. Disney has had to postpone a number of titles out toward the later months of the year or even further. For some, there is now no scheduled release date. In short, there are estimates that the Walt Disney Co. may be losing as much as $30 million per day as nearly every single segment that might be considered a driver of margin involves the entertainment of mass audiences in one form or another. The one unit showing growth, the streaming business, runs at a loss for now and is not expected to turn the corner of profitability for years still.

Return of The Jedi?

Former CEO, now Executive Chairman Bob Iger, has been out and about of late, featured in Barron's last week, and at the New York Times over the weekend. Iger only stepped back from actively running the company in February. A great out, you might say. That's not how he sees it. Iger had preferred to take on a more creative role, and have new CEO Bob Chapek, who had been running the parks segment, run the entire day to day business. Iger told Ben Smith at the New York Times, "A crisis of this magnitude, and its impact on Disney, would necessarily result in my actively helping Bob (Chapek) and the company contend with it, particularly since I ran the company for 15 years."

From the Barron's piece, Iger asserts that then firm does have enough access to capital to remain solvent for a prolonged period. He does stress that prolonged does not mean forever. Iger goes on to say the firm will not likely return to business as usual if and when the sun shines over the Magic Kingdom once again. There will be efforts made toward becoming a more efficient firm, which could mean a reduced payroll, less office space, and from a security perspective, finding better ways to improve the level of comfort whereas the consumer is concerned. Does that mean taking temperatures as one enters a theme park, or steps onto a cruise ship, or into a theater? Or limiting availability to fewer consumers? A vaccine would be better, of course. Until then, can Disney approach its very recent levels of success in anything resembling short order? I don't know.

As most of you know, I am long some shares of Disney. I wonder myself. Am I elated as a shareholder that Bob Iger has resumed more control over the company? He's been great for my portfolio in the past. Or... is this so bad, that Bob Iger felt compelled to step in? Who among us can say for sure that it's not the latter. It doesn't sound good.

I'll Tell You What 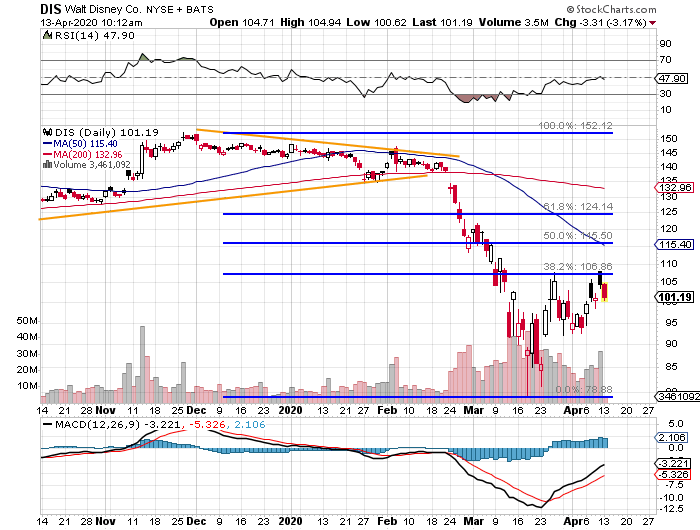 We've now seen Fibonacci resistance. It's worked. Ten days ago, I suggested for those who might be looking for protection for a long position that they could purchase May 15th $80 puts for around $4, and write May 15th $100 calls for a rough $7. Disney reports on May 8th. The puts are worth less than $2 at this point. Might as well hang on to them if one has them for the protection they do offer at this point.

As for the calls, if one went that route, the trader could buy those back right now for a bout $7.30, so a small loss, and then lay them out a month later (June 19th), for roughly $9.40, at least making back the approximate $2 lost on the puts.

For those not messing around with options, my thought is that maybe one cuts back on exposure if the share fail to hold par ($100). There is just too much risk for a large firm with no profitable businesses. Even if its not their fault at all. Long live the mouse.

Get an email alert each time I write an article for Real Money. Click the "+Follow" next to my byline to this article.
TAGS: Economy | Investing | Markets | Options | Stocks | Technical Analysis | Trading | Media | Movies | Coronavirus