On Thursday, XPO Logistics (XPO) announced a plan to split its core business in two, and to divest or sell two other key businesses. The stock closed at $61.93 on Tuesday at 11 Wall Street. I see it trading above $70 (+14%+) early on Wednesday morning.

Exactly one month earlier, XPO Logistics posted the firm's fourth quarter financial results, easily beating expectations for both adjusted EPS and revenue generation. Said revenues have been growing on an annual basis for four consecutive quarters. The firm's net cash position is down, but so is existing long-term debt, cut almost in half over a year and a half. The balance sheet, as a result, while not quite fortress-like, certainly looks better than it has, and runs with a current ratio greater than one. Still... tangible book value per share and free cash flow per share, at least as of December 31, resided in negative territory.

However, the company did, in early February... guide adjusted 2022 EBITDA toward $1.36B to $1.4B, which would be good for growth of 11% at the midpoint, and guide adjusted EPS toward $5.00 to $5.40, which translated to earnings growth of 22% at the midpoint. North American LTL (less than a truckload) was expected to provide at least $1B of that full year adjusted EBITDA projection. That will matter in just a minute. The problem? The stock, at least until Tuesday night, still traded at just 11 times forward looking earnings. For comparison's sake, FedEx (FDX) trades at just nine times, but (opinion) "best in breed" United Parcel Service (UPS) currently trades at more than 15 times.

Okay, there are a few moving parts here. XPO Logistics plans to split its brokered transportation services business from its "less than truckload" or LTL business in North America. The firm also plans to sell its North American intermodal business (that is a rail/road combo). Currently XPO is under an exclusivity agreement to sell this business to a potential but still unnamed buyer. XPO will also exit its European business either through an outright sale or through a separate European listing.

Got it? They're selling intermodal, selling Europe, and splitting freight brokerage (matching cargo with available trucks) from the LTL business which will retain the XPO identity and still be the third largest provider of domestic and cross-border LTL freight movement. XPO will still be headquartered in Greenwich, CT, as the entire company is now, while the spin-off will be headquartered in Charlotte, NC. XPO expects to complete at least the spin-off portion of these moves by the fourth quarter of this year, subject to being able to refinance the firm's debt with board approval.

CEO Brad Jacobs who built XPO through years of acquisitions and spun out the contract logistics business as GXO Logistics (GXO) last year... said, "We believe that by separating these businesses, we can significantly enhance value creation for our customers, employees, and shareholders, as we did with the GXO spin-off." Jacobs added that he sees the stock currently trading at a "conglomerate discount."

I can find six sell-side analysts rated at five stars by TipRanks who have opined on XPO Logistics since this news broke. All six have "buy" or "buy equivalent" ratings on the stock. Two of the six have declined to set a target price, while the average target price of the four is $106.25. The high target among the six is $119 (Allison Poliniak of Wells Fargo), while the low is $91 (Jonathan Chappell of Evercore ISI). 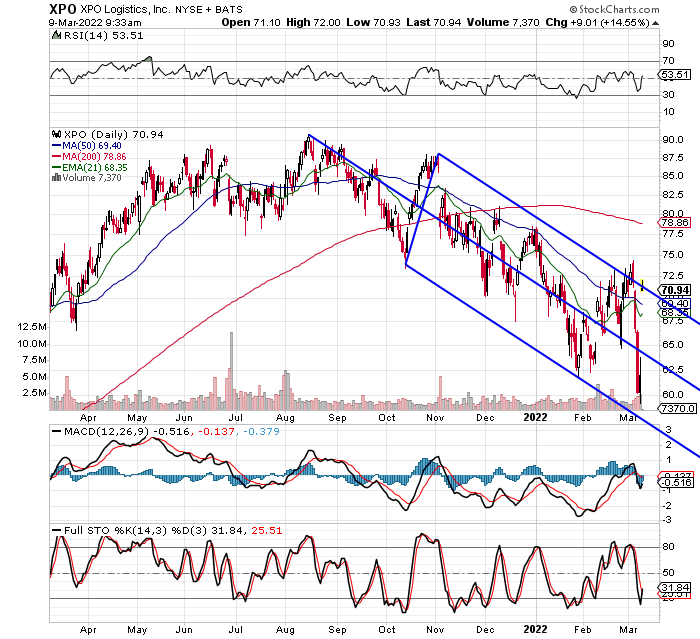 Readers will note that this morning's opening pop at least pulls XPO away from technically oversold territory. The RSI now approaches neutral, while the Full Stochastics Oscillator escapes higher. All three components of the daily MACD remain negative.

Importantly, the shares have opened above their 21 day EMA and 50 day SMA. However, the shares have so far (it's early) had trouble breaking out of a downward sloping Pitchfork model going back to last August.

I think breaking the company up is a good idea. I do think I want to be long this name at some point before that happens. I don't think buying the shares this morning after missing this move is a good idea. I want to see how the last sale interacts with potential support at that 50 day SMA prior to heading out for the 200 day SMA. I don't see any related options trading just yet, but if I can write $60 or $55 puts for a premium of $2 to $3, I might just make that sale, as I wait to see if the shares come in.

(UPS is a holding in the Action Alerts PLUS member club. Want to be alerted before AAP buys or sells this stock? Learn more now.)

Get an email alert each time I write an article for Real Money. Click the "+Follow" next to my byline to this article.
TAGS: Earnings | Investing | Stocks | Technical Analysis | Trading | Transportation