Hello, old friend. Old, but not long-time Sarge fave ViacomCBS (VIAC) reported the firm's first quarter performance on Thursday morning. To put it bluntly, the firm knocked the cover off of the ball. VIAC had been a favorite stock of mine back in 2019. Some lunch money was made, I lost patience, and moved on way before the stock screamed to almost absurd heights in early 2021. Then, as one of the names involved at the center of the Archegos Capital collapse, the share price collapsed as a number of well-known investment banks were forced to liquidate large positions. The Sarge's interest had been rekindled. Your old pal, Sarge is always interested when he smells blood in the water, even more so when the one bleeding is a certain investment bank. Long story. We'll let it go at that.

For the reporting period, ViacomCBS posted adjusted EPS of $1.52, and GAAP EPS of $1.42, easily beating Wall Street's expectations by either metric. Revenue generation increased 14% year over year to $7.41 billion, also a nice sized beat. It gets even better. Check this out. Year over year, Operating Income improved 69% to $1.528 billion. Net earnings from continuing operations attributable to ViacomCBS grew 79% to $899 million, and Operating Cash Flow popped 362% to $1.651 billion. Now sit down. Free Cash Flow soared 419% to $1.589 billion. The balance sheet is improving. Cash and cash equivalents have almost doubled in a year's time. Goodwill stayed put (actually contracted just a smidge). Importantly, the firm has successfully whittled a rough $2 billion off of it's long-term debt load.

Is the stock broken? I don't think so. Are all of the injured parties out of the name? We don't know that either. The firm does pay shareholders $0.96 a year to hang around for a yield of 2.5%. I do like that, and I do like the early success of the Paramount + streaming service. That said, there is not a discernable pattern to be had when a stock through no fault of its own gets rocked to great heights and then body slammed due to the lack of what do I call it? Talent? At investment banks they take on or allow certain clients to get in a bit over their heads. 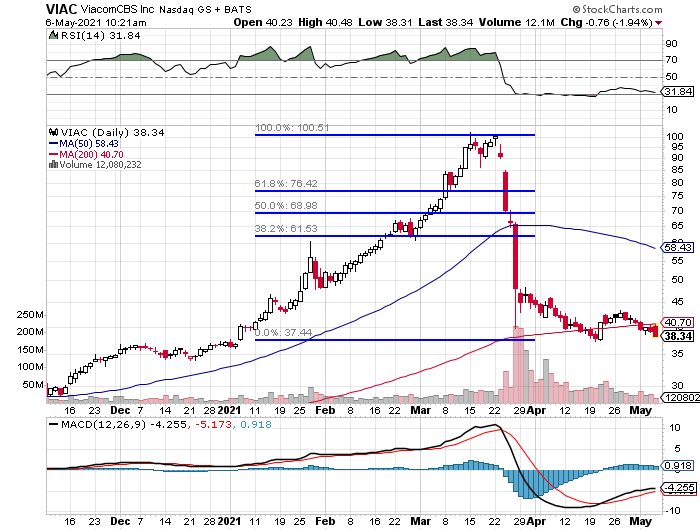 The shares have now given up all of the gains made during the pre-opening hours. There does appear to be some support right here, as the shares have been incredibly stable since collapsing in late March. A 38.2% retracement of that March carnage would get VIAC back to the $61 level, but I see that as a bit much to hope for, as I would think that those who did have to liquidate such large blocks would be even less talented than I take them for (and I take them for babbling fools, no joke) if they really sold all of their shares down here.

I am long a full position in this name at an average price of $38.04, so I am up small. My plan at this point is to trade half positions around a $38/$42 range if granted the opportunity (which I have already been doing, my position size is down from 300% of full). Longer term, I think I hang on to at least half of these, as that RSI will not stay oversold or close to it forever. This stock will either move toward the 50 day SMA, or the 50 day SMA will move toward the stock. I am more than fine with meeting in the middle.

Get an email alert each time I write an article for Real Money. Click the "+Follow" next to my byline to this article.
TAGS: Earnings | Investing | Stocks | Technical Analysis | Trading | Media