What to do with a name like Lululemon Athletica (LULU) . I have written about this company on multiple occasions. I have traded it more often than I have written on it. The trades, owing to nothing other than this being a good stock in a bull market, were profitable. I think every time. I take no credit. I just rode the wave. Except this time. You'll recall that as planet earth burned back in February, and well into March, that I was quite open about the need to narrow portfolios going into a deep contraction in economic activity. LULU did not make that cut. Not a shot at LULU, a lot of good firms did not make that cut. It was not until early April when I felt that technically, a change in trend had been confirmed, and quite honestly, I was methodical in putting the risk back on. As a result of this lack of aggression, LULU is the one (one of the ones) that got away. Q1 earnings are due tomorrow (Thursday) after the closing bell. The shares have moved well beyond the February highs. Short question. Is there still some money to be made here. Let you know when it hits the P/L, but sure, we can give this a go. Let's open the door to see what we can see.

Wall Street consensus for what Lululemon Athletica reports tomorrow night is for EPS of $0.23. Fact is though that 32 analysts cover this name and that consensus is really more like an average. As far as I can tell, the high projection across the group is for EPS of $0.55, while the lowest is down around -$0.15. The broader view for revenue generation is for roughly $683 million, but again, there is at least one analyst all the way up at $811 million, and another way down at $552 million. I other words... at least these guys aren't copying each other's work.

That average revenue number, if realized, would represent an outright contraction in sales year over year of -12.6%. This would break a streak of eight consecutive quarters of 20% growth or more. Acceptable for a business that largely sells apparel in the age of Covid-19, while gyms everywhere have been closed for months? I think so, if temporary.

Brian Nagel, a very highly rated analyst (Oppenheimer) whose work I respect, admits that valuation at these levels may be a bit stretched, but also feels that the firm is positioned well for an economy coming out of a public health crisis. Nagel has an outperform rating on LULU and has now increased his price target to $370. He's not alone. A number of analysts have opined ahead of these earnings. Some of them are also highly rated. This one caught my eye. On Tuesday, just yesterday. If you've read me for a while, then you know that my ears perk up when I hear something, anything from Morgan Stanley's Kimberly Greenberger. She maintained her "hold" rating on LULU going into the numbers, with a price target of $296. That's down about $30 from the last sale. Hmm, what's a guy trying to make a couple of bucks, who does like the name and the business, to do? 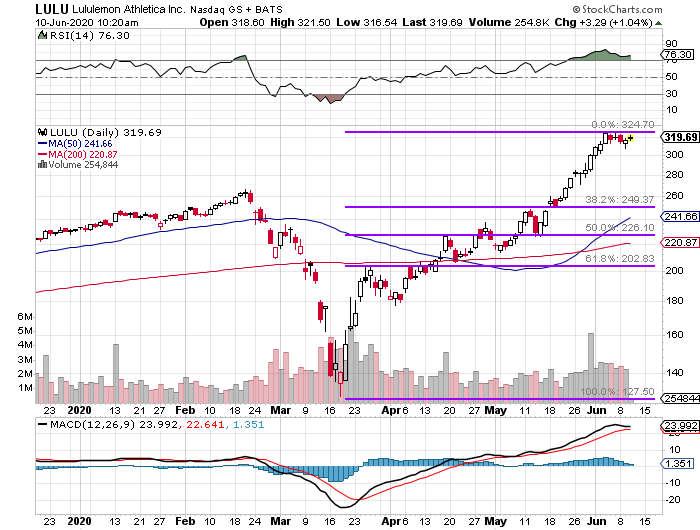 Hmm... Relative Strength says "overbought." The daily MACD looks too hot for it's own good as well. The problem here is that should the market not like what it hears on Thursday, a 38.2% Fibonacci retracement off of the recent highs does not come into play for a long way down... all the way to $249. The 50 day SMA is even lower ($241).

So, this all said, I am not about to pay $321 or so for LULU ahead of the numbers after watching the shares leave me in the station for good about six weeks ago. My thoughts? I would buy LULU at a discount. I would also be willing to risk exposure at a certain level in order to leave myself so exposed. Okay, let's have an idea, or ideas.

Get an email alert each time I write an article for Real Money. Click the "+Follow" next to my byline to this article.
TAGS: Earnings | Economy | Investing | Stocks | Technical Analysis | Trading | Apparel | Retail | E-Commerce