Seems like just last week that I wrote on my opinion concerning Tesla (TSLA) . Indeed it was last Tuesday. Eight days later it would already seem that another look would be appropriate. We touched base last week after Morgan Stanley's Adam Jonas laid out a worst case scenario where Tesla's share price could drop all the way to $10. The prior worst case price that Jonas had illustrated for investors had been $97, so this was drastically worse. It did not matter much that Jonas still had a Buy rating on the name as well as a $230 price target. I stated in that piece that I might take a small long position in Tesla in response to the oversold condition that I then thought the shares to be in. I did take that shot, I did get out of that position whole after three days, but only after averaging down twice. That was luck, not skill.

Now, a week later, the pace of firm-specific news is flowing rapidly. As the firm's stock and the firm's bonds have come under pressure, short interest has continued to grown even larger. Currently almost 38 million shares are held in short positions, or roughly 29% of the float. Where is the cult? Will they rescue these shares as they so often have in the past? Perhaps they have moved on to Beyond Meat (BYND) , another highly shorted growth stock that supporters refer to as "the future." Since Jonas made his case others have come out with dire worst case scenario prices.

As the firm has seen profitability dissipate, and sales growth slow dramatically, the firm has resorted to cost cutting and capital raising in an effort to get past the current environment. Now, this...brokerage firm Interactive Brokers has informed customers holding Tesla stock, options, futures, or other products will see margin requirements rise from the current 30% to 40%. This increase will commence in 1% increments starting tonight (Wednesday), and reaching target by June 7th. For your information, Interactive Brokers increased margin requirement to the 30% level last summer. So, one must ask themselves. Is there hope? Oddly enough, I think there might be, but where?

While CEO Elon Musk has been curtailed on Twitter (TWTR) , Tesla has been active on Weibo (WB) . Weibo, for those who do not know, is a Twitter-like, primarily Chinese social media network. Tesla announced that the firm will make a surprise announcement in China this Friday, May 31st. In subsequent postings on Weibo, Tesla has initiated a contest for fans to guess the price for the Chinese manufactured version of the Model 3. How interesting.

There can be no doubt that the trade war has put a hurting on Tesla. Still, China is the world's largest market for automobiles. By manufacturing the vehicles in China... at the still being build factory in Shanghai, Tesla then accesses this market while avoiding cross-border tariffs. Tesla would also not have to worry about gaining access to the myriad of processed rare-earth metals necessary to the manufacture of batteries for electric vehicles. Food for thought. For the firm, revenue in China represented just 8% of the whole at $1.8 billion. The demand is thought to be there. Does Tesla need to stand with one foot in each nation? They might, in order to survive. 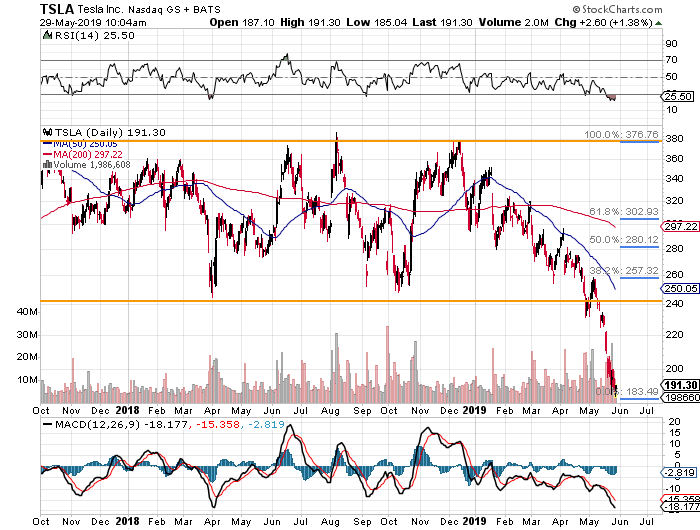 Not exactly the same chart as last week, but close. The Fib levels have changed, as have the simple moving averages. Still oversold, even with today's counter market rally. A little momentum could provide a short cover. Do you want an equity stake? No easy question to answer. I will tell you what - if you have some mad money, with this pending news event coming in China this Friday, Thursday night in New York.... a May 31st $180/$200 strangle for less then $3 sounds interesting. I bet you get the whole thing on for $2.80

To get long both puts and calls ten dollars out of the money that expire this Friday. That keeps the premiums (net debit) a bit lower.

Note: The trade is a complete loss of $274 if the shares land in between $180 and $200 by week's end. That's a lot better than risking a lot on equity in my book. This is a risk averse way for an aggressive trader to bet on short term, TSLA specific volatility. Nothing more.

Get an email alert each time I write an article for Real Money. Click the "+Follow" next to my byline to this article.
TAGS: Investing | Markets | Options | Stocks | Technical Analysis | Trading | Automotive | Technology | China | Stock of the Day