Some market watchers are anticipating great earnings numbers from Chipotle Mexican Grill (CMG)  on Tuesday. The last time we looked at CMG was on July 16, and I was worried about a top reversal pattern on the stock. We did not identify the "top tick" but we were close to the end of the rally. Prices fell hard and fast from late August to late January.

Let's check on the charts again.
In this daily bar chart of CMG, below, we can see that prices have rebounded and made what looks like a bull-flag formation. This is a short-term continuation pattern and if it plays out would mean that the height of the pole (from $1,350 to $1,500) is repeated on the upside breakout.
Are the conditions right for this kind of move? We can see a bearish dead, or death, cross last month, when the 50-day moving average line moved below the 200-day line. This is a bearish signal but often comes late and obviously well off the top. The On-Balance-Volume (OBV) line shows a decline from October as traders were more aggressive sellers. The OBV line shows only a little stability even with a volume spike in January at the low. I would prefer to see the OBV line with a stronger response. The Moving Average Convergence Divergence (MACD) oscillator shows a cover-shorts crossover.

In this weekly Japanese candlestick chart of CMG, below, we can see that prices held key support around $1,300 and made a bit of a reversal. I say a bit of reversal because the latest candle shows an upper shadow telling me that there is some rejection of the recent highs. The weekly OBV line shows a drift lower in recent months. Prices are below the cresting 40-week moving average line. The weekly MACD oscillator is bearish as it moves below the zero-line.

In this daily Point and Figure chart of CMG, below, we can see a potential upside price target of $1,899. 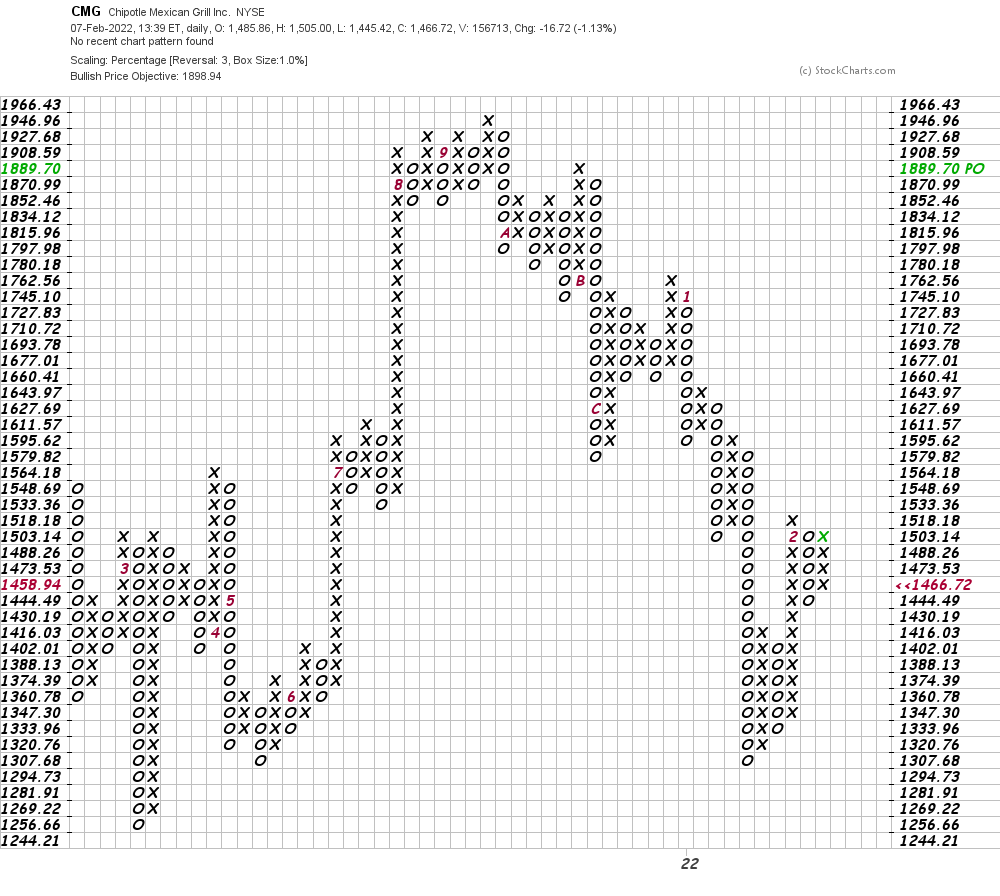 In this weekly Point and Figure chart of CMG, below, a potential downside price target of $836. A big difference compared to the daily chart. above.

Bottom line strategy: I have no special knowledge of what CMG is going to report on Tuesday after the close, but the charts suggest we could have a modest upside breakout. Traders could go long above $1,534 but they have to risk below $1,430. If the risk is too great then pass on the trade. I doubt that CMG can rally to the Point and Figure target of $1.899 but it could pop to $1,650 or the underside of the 200-day moving average line. A weekly close below $1,300 would be very bearish.
Get an email alert each time I write an article for Real Money. Click the "+Follow" next to my byline to this article.
TAGS: Investing | Technical Analysis | Restaurants | Earnings Preview