McDermott International  (MDR) is set to report its latest earnings numbers on Monday. Prices have been weak for a long time with the zenith way back in 2008. Bottom picking is generally not a recommended activity and it has been futile with MDR for the most part.

Is there any hope for a reversal? Let's explore the latest charts and indicators.

In this daily bar chart of MDR, below, we can see that prices sunk lower and lower the past 12 months. Even after being cut in half from $24 we can see a big gap lower in late October. Volume surged to north of 40 million shares as traders dumped long positions. Prices continued lower to late December/early January when the broad market began its first quarter rally.

We can see another gap lower earlier this month on high volume but less intense volume than back in October. Maybe sellers were exhausted? Prices did manage to rally above the flat 50-day moving average line but gapped below it.

The daily On-Balance-Volume (OBV) line shows a bearish decline from May to December and then a promising rise. Seems like someone is finally doing some buying.

The Moving Average Convergence Divergence (MACD) oscillator has flipped from a buy signal to a sell signal in the past two months.

In this weekly bar chart of MDR, below, we can see a mostly bearish picture. Prices are below the declining 40-week moving average line.

The weekly OBV line is bearish but so far it has not made a new low for the move down.

The weekly MACD oscillator crossed to the upside for a cover shorts buy signal but it is a long way from the zero line.

In this Point and Figure chart of MDR, below, there is no volume and no price gaps.

A rally to $10.00 will start to improve this chart and a decline below $6.50 will keep the bears in control. 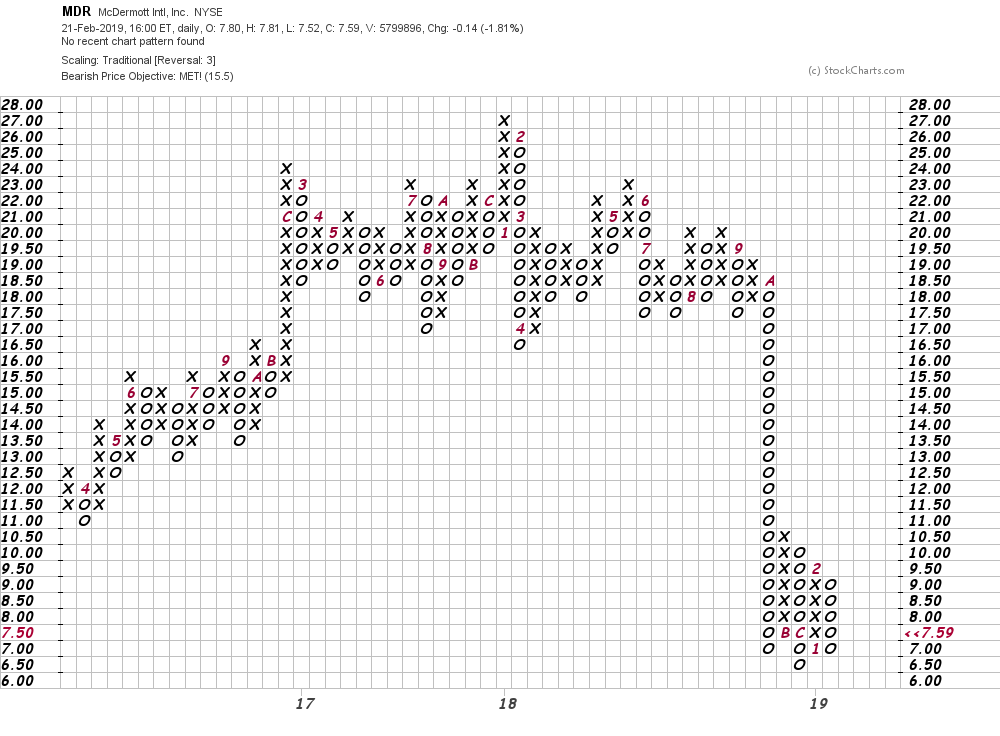 Bottom line strategy: Someone has bought MDR in the past seven weeks. It could short-covering or it could be new outright longs. I do not know. Seven weeks is not much of a base so we shouldn't get too excited. Nevertheless, MDR may have seen its worse. I think the stock can do better from here but that does not mean I would strongly recommend a long position.