Horizon Therapeutics (HZNP) closed on Friday at $97.29, which works out to 20.5 times forward looking earnings. For Horizon's third quarter, the firm posted GAAP and adjusted EPS that beat Wall Street on about $925M in revenue. While that number did beat expectations, it actually accounted for a year over year sales contraction of 11%. Though overall sales had increased 47% last year over the year prior.

However, this has not stopped others from showing interest in the Ireland-based firm that focuses on rare and rheumatic diseases.

On Monday morning, news broke that Amgen (AMGN) had agreed to acquire Horizon for $116.50 per share, which is a 20% premium to Friday's closing price. The shares were trading in the low $60's when it started to become obvious that Horizon was in play. Interestingly, in late November, Wells Fargo (WFC) analyst Derek Archila had come up with a "back of the envelope" valuation of $135 per share as fair value. If so, it would appear that Amgen has done well in this deal.

The deal values the firm's fully diluted equity at about $27.8B or $28.3B when debt is included. The deal came about after both Sanofi (SNY) and the Janssen Global Services unit of Johnson & Johnson (JNJ) had backed off.

Horizon has three leading revenue producing products, Tepezza, Krystexxa, and Uplizna. The three therapeutics have in aggregate... added about $2B to the firm's sales totals through the first nine months of the fiscal year. The one with the highest ceiling is thought to be Tepezza, which is used to treat thyroid eye disease. This product is projected to potentially hit $4B in annual sales at its apex.

Amgen expects to use cash in hand and debt to finance this deal, which is expected to close at some point during H1 2023. The merger becomes accretive to revenue and adjusted earnings as soon as 2024. Amgen has not (yet?) updated prior guidance.

Amgen reported the firm's third quarter in early November. Beats on the top and adjusted bottom lines. Revenue "grew" -0.9% year over year and has not experienced sales growth of more than 6% since Q3 2020. Amgen has posted many successive quarters of positive free cash flow, including $2.8B worth for the most recent quarter and $9.3B for the trailing 12 months. Amgen ended the last quarter with a net cash position of $11.478B and a current ratio of 1.68. This is all good.

However, Amgen also already has $37.161B worth of long-term debt on the books and another $1.5B in debt labeled as current. Now, they will reduce the cash position and increase the debt-load in order to bring on Horizon that upon acquisition will tack on another $2.5B worth of long-term debt. I do understand having to import growth once growth becomes stagnant, and Horizon's existing business certainly appears likely to grow. That said, I do not like the size of Amgen's current debt-load, nor the acknowledgement that it will grow as the cash on hand is spent. There is some risk here.

Amgen's stock trades at 17 times forward looking earnings, and currently pays out $7.76 annually to shareholders per share, yielding 2.78%, which is nice. The free cash flow has been beefy. I would like to hear out loud that the dividend is safe. Can they do that? I don't know.

I have to say, despite Wells Fargo's opinion, I am not sure that this deal makes an immediate improvement to Amgen's situation, but it will likely have a corrosive impact upon the quality of the balance sheet. 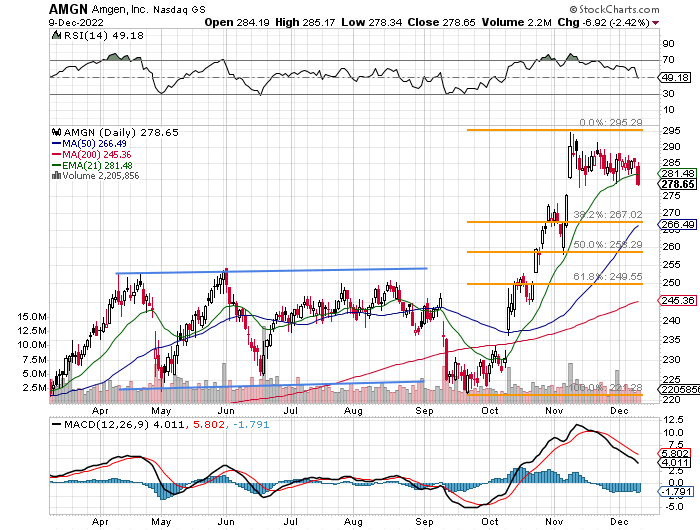 AMGN comes in having already broken out from a flat base that ran from April through September. I see the probability that the stock retraces a portion of that move as likely even if there was not a large deal afoot.

I do not see this morning's dip in the AMGN share price as an opportunity for medium to long-term investors. Traders however, can play a move back to the 50 day SMA, or try to arb the $111 last sale for HZNP against the take out price. Some point in H1 2023 might seem like a while for one trying to make $5.

I have noticed that I have not seen anything from the community of sell-side analysts on this deal from Amgen's perspective. Sometimes, the prudent thing is to put one's hands in one's pockets.

Get an email alert each time I write an article for Real Money. Click the "+Follow" next to my byline to this article.
TAGS: Mergers and Acquisitions | Dividends | Drug Approvals | Investing | Stocks | Technical Analysis | Trading | Healthcare