At the headline level, Roku (ROKU) had a fantastic quarter. Interpreting that performance and casting a vision forward? Now, that's an issue. For the second quarter... Roku posted EPS of $0.52, simply crushing Wall Street's expectations. Revenue landed at $645.12 million, also easily beating consensus view, and good enough for year over year growth of 81.2%. That's all very good. From here on out, some of the metrics become mixed.

Roku expects third (current) quarter revenue to end up in a range spanning from $675 million to $685 million. Wall Street is down around $645 million on this metric. Gross profit is expected the reach $315 million to $325 million. Net income is projected to end up somewhere between $-3 million to $+7 million, with adjusted EBITDA at $60 million to $70 million.

Cash and cash equivalents have nearly doubled to $2.083 billion since the start of the year. Inventories are down small, while prepaid expenses (an asset) have tripled. Current assets have grown by more than $1.1 billion over six months. Total assets are up $1.3 billion over that time. I have no idea why the firm doubled the entry for "goodwill", it was not necessary.

On the liability side, long term debt is actually down, while operating lease liabilities increased small. Bottom line... Current assets dwarf current liabilities. Total assets dwarf total liabilities less stockholder equity. This balance sheet is essentially strong to very strong. Roku could pay not just its long-term debt, but the firm's total liabilities out of cash, and still have a cash balance of over $1 billion left over.

Roku acknowledged the second quarter misses across several metrics and correctly blamed it on the economic recovery as the nation emerged from the pandemic and started doing things outdoors more, thus streaming entertainment less. As the nation, as well as the planet, now heads into autumn with the pandemic re-imposing itself on people's lives, I think that Roku has an excellent chance to best it's own expectations for this quarter. Is Roku overvalued? Of course it is, trading at 491 times trailing earnings and 26 times sales. That does not mean that the name is not tradable or worthy of speculation at a discount. 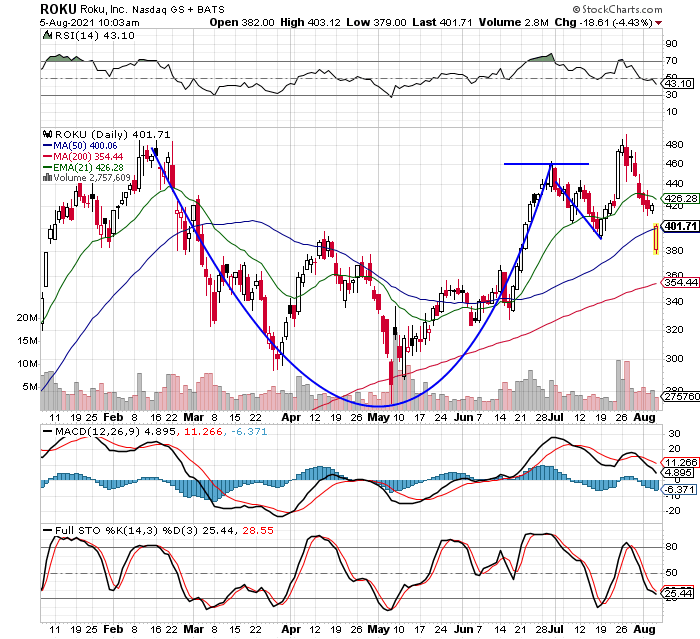 After what was a beautiful cup with handle pattern that simply failed... We have before us, is a gap between $413 and $400 that most likely fills at some point. If interested, I would wait to see if the shares hold after re-taking the 50 day SMA ($400) before pulling any triggers. Better to sacrifice a few bucks on entry than to initiate only to realize that one has done so, while waffling up against resistance.

Get an email alert each time I write an article for Real Money. Click the "+Follow" next to my byline to this article.
TAGS: Earnings | Investing | Stocks | Technical Analysis | Trading | Media | Coronavirus