About Roblox (RBLX) . What about it? Huh. Is it a good investment? That's what I'm trying to figure out. I did initiate a long position on Tuesday, as the shares dipped in response to earnings. About 1/8 of a full investment position. A start. This one has to evolve. Shall we explore? Let's.

Roblox, an online entertainment platform, reported second quarter financial results on Monday night. The firm posted a loss of $0.25 per share on revenue of $454.1 million. Bookings printed at $665.5 million. The results fell short of expectations on all three metrics. Well short on profitability.

So What Caught My Eye?

Growth. Growth to the left, growth to the right. This firm is growing everything, even expenses... for a good reason. More on that in a moment. Revenue generation grew 127% year over year for the second quarter, a third consecutive quarter of three digit growth. Bookings increased 34.7% from a year ago. Average daily users were 43.2 million by the end of the reporting period, a 29% increase year over year.

Pandemic related growth? Certainly. Is it sticky? For July, which for much of the month was before most of the nation realized that the Delta variant of the SARS-CoV-2 virus had to be taken seriously, DAUs were apparently an estimated 28% higher y/y, and 8% higher month over month. Hours engaged were up roughly 20% y/y and 10% to 11% month over month. So, yes, the gains made during the worst of the pandemic do appear to be sticky for Roblox.

The firm is spending money on research and development, technology infrastructure and compensation for developers. The firm is one of those handful of firms, including tech giants, such as Facebook (FB) and Microsoft (MSFT) , talking about the "Metaverse." The Metaverse is, or will be (in concept) an all encompassing online world that transcends tech platforms. People will exist as avatars and share immersive, virtual experiences such as visiting friends and family, attending sports or entertainment events, or even going to work. Hmm, aren't you white collar workers glad that your boss or your firm did not have the Metaverse available to them for the past year and a half. It is however, where the geniuses who think of these things think they are taking the internet. Roblox is involved. 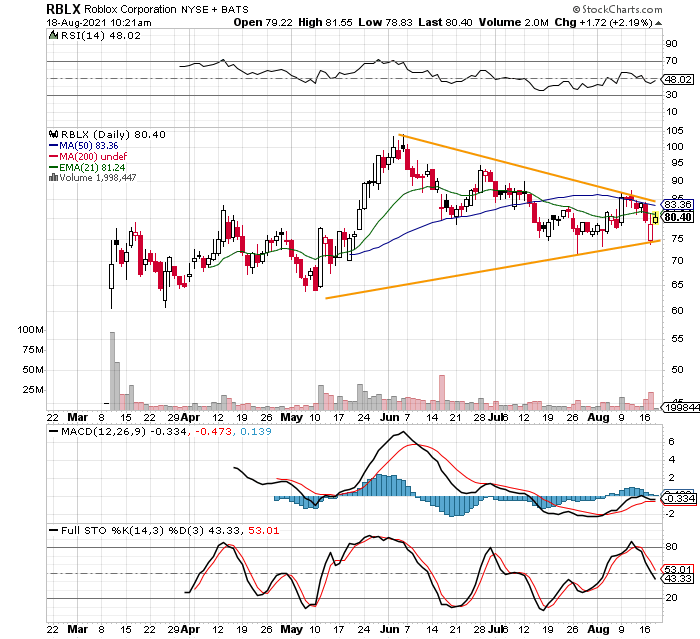 Readers will see that RBLX has been subject to a series of lower highs coupled with higher lows. The shares have been forming a pennant pattern since early May, and as such are likely to produce an explosive move once the two lines come close to covering. I am thinking that the expected move could be higher as most of the underlying metrics are all aggressively moving in the right direction.

The shares are trading slightly higher on Wednesday, but have not yet retaken the 21 day EMA, nor the 50 day SMA that has been stiff resistance through the month of August.

My tentative plan is to add on dips as long as those dips respect the upwardly mobile lowest trend line, and perhaps add again on momentum above that 50 day line. In between the two spots, I will sit on my hands. Traders can still get paid a rough $2.75 for September 17th puts. I find that interesting, as well as attractive.

(Facebook and Microsoft are holdings in Jim Cramer's Action Alerts PLUS member club. Want to be alerted before Jim Cramer buys or sells these stocks? Learn more now.)

Get an email alert each time I write an article for Real Money. Click the "+Follow" next to my byline to this article.
TAGS: Investing | Stocks | Technical Analysis | Trading | Technology