Peloton (PTON) , the early pandemic favorite has had an awful year. No two ways about that. From recalls to having to lower prices for equipment to levels still far too expensive for middle-class consumers, to the stock, which at Thursday's closing price of $44.45, stood 74% below last January's high of $171.09. "Cyber Weekend" came and went without giving the shares a boost. That was even with the discovery of a new and highly transmissible variant of Covid-19 in southern Africa that is apparently already almost everywhere.

Peloton does, however, have a champion. On Friday morning, Deutsche Bank's Chris Woronka (Rated four stars at TipRanks) has a "buy" rating and a $76 target price. Woronka writes that he sees scenarios where Peloton trades lower, but he also sees more scenarios that result in a greater upside for the home fitness company's earnings power in what he class a "normalized" and "fully reopened" economic environment. Woronka thinks that a future that highly integrates with the hybrid work model plays out well for Peloton.

What Do I See?

If you read me often, then you know that I am not a fan of the app. There are, in my opinion, far better, and more demanding workouts to be found in the competition. That said, there is no doubt that the interactive aspect of Peloton does draw some consumers, and I have never been one to confuse my personal preferences with a company's ability to perform.

In all, 26 sell-side analysts cover PTON. Current quarter (not to be reported until early February) consensus for EPS is for a loss of $1.27 per share, with a range spanning from $-0.89 to $1.51. Wall Street on average sees revenue at $1.17B, which is sandwiched in between a low expectation of $1.09B and a high of $1.24B. This would amount to sales growth of 10.4% year over year, and an acceleration over the anemic 6% growth reported for the firm's fiscal first quarter. The net loss of $-1.27 would be comparable to an adjusted profit ($0/20) for the year ago period.

Well, the balance sheet is not an outright disaster. Not even close, but the ball is moving in the wrong direction. Cash and short-term investments combined are larger than long-term debt. That said, at the end of the September quarter, the net cash balance stood at $924M, down from $2.685B just six months earlier. This while the entry for long-term debt stood at $838M, the entire balance created in 2021. Then, there's the entry for accounts payable that lands at $970M in September, up from $364M just three months earlier. This measures up against accounts receivable of just $81M. Yikes.

All said, current assets do outweigh current liabilities, and total assets do outweigh total liabilities less equity. That said, the firm has jacked the entry for "goodwill" to $212M for the September report versus just $65M back in March. Sure, the current ratio is still "okay" at 1.96, but that includes $1.269B in inventory. The firm's quick ratio at the end of the last quarter was 0.77. Just my opinion, but in my book, that's not very good.

Cash flows have been troubling. Operating profit margin has run at almost -13%. Net income for the September quarter printed at $-376M as cash from operations landed at $-561M. Levered free cash flow hit the tape at $-580M for the quarter, or $-1.26B for the past 12 months. Free cash flow per share comes to $-2.16. The firm has posted negative free cash flow for three consecutive quarters. Just a heads up... a little over 9% of the entire float is held in short positions. This is just about the level where I consider short interest a bit too high for me to pile on from that direction, though it still might be too small to catch the attention of that meme crowd. (I don't like to short stocks once 7%-8% of the float is held short.)

Bottom line, these fundamentals did not convince me to go out and get long the stock. You may have a different opinion. That's what makes a market. Peloton might be worthy of speculation, but realize that speculation is what an investment in Peloton is. 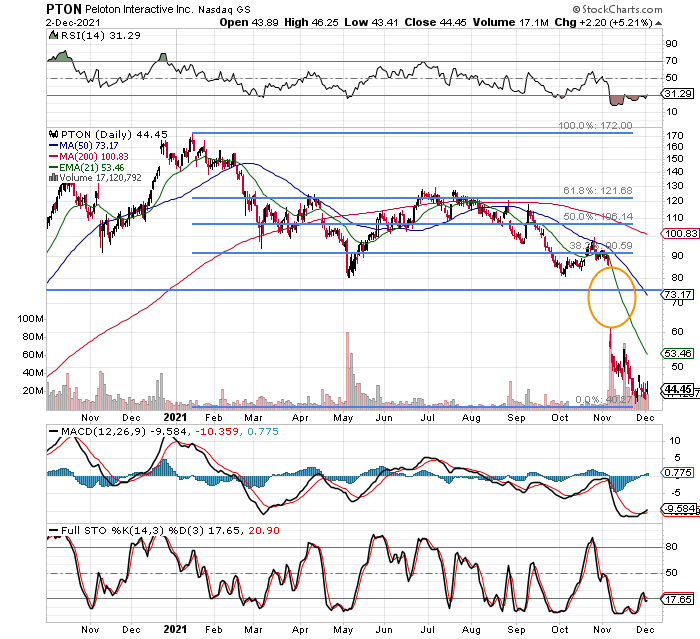 The chart might not be as bad as the fundamentals. The shares opened higher this morning. Coming in, whether by Relative Strength, the daily MACD, or the Full Stochastics Oscillator, these shares were oversold. There is a significant unfilled gap in between $85 and $61 that was created in early November when the quarter described above was reported. A 23.6% Fibonacci retracement (which I drew in here myself) recovers a good portion of that gap, which could be where Chris Woronka got his target price from. A full 38.2% retracement would fill the entire gap.

Clearly, the technicals more than the fundamentals support the idea of a potential upside move. Personally, I would rather day trade this name than initiate a core position on the long side. I could be wrong, but this company as well as the shares might do very well. Stock trades at three times sales. Used to trade at 19 times sales.

Get an email alert each time I write an article for Real Money. Click the "+Follow" next to my byline to this article.
TAGS: Investing | Stocks | Technical Analysis | Trading | Retail | Technology | Consumer Products | Sports