Consensus. We all know what the word means. Quite simply the word consensus expresses a broad or general agreement. The large banks will kick off the unofficial start of fourth quarter earnings season in 10 days time. JP Morgan (JPM) , Citigroup (C) , and Wells Fargo (WFC) all report the quarterly numbers prior to the opening bell not this, but next Friday. After that it's game on. Every earnings season there are a few outliers that report either ahead of or after what we think of as the "season." This Thursday will be one of those days where enough firms report "out of season". I see a dozen or so names reporting this Thursday, that warrant some mention. Among that dozen, there are at least two headliners... Constellation Brands (STZ) , and Micron (MU) .

Of those two names, Micron has been drawing an incredible amount of attention from the community of sell-side analysts ahead of the numbers. That brings us back to the word "consensus". I think we need to take a closer look.

After the closing bell this Thursday afternoon, Micron will release the firm's fiscal first quarter financial results. Being part of the semiconductor industry, Micron is closely followed by a couple dozen mostly highly rated analysts. Wall Street is looking for EPS of $0.71 on revenue of $5.73 billion. These numbers, if accurate, would be good for earnings growth of 48% on revenue growth of 11.4%. Another way to put this would be a second consecutive quarter of earnings growth, and third consecutive quarter of sales growth after a long period of continuous decline for both. Is Micron back? By the looks of the stock's performance in late 2020, the easy answer would be "yes". That said, we've (I have) been fooled by Micron before. This leaves two questions. One... Can we trust Micron this time? Two... Is it too late to hop on board?

I am sure that if you have clicked on this article that you already know what Citigroup four star (TipRanks) analyst Christopher Danely did this (Tuesday) morning. For those that just clicked on this piece because you like me, I thank you... and Danely "double upgraded" Micron to "Buy" all the way from "Sell", while lifting his target price from $35 to an even $100. While I often mock such drastic turns on a dime, maybe I'll hold off for now. The man admits he was wrong, expects the "long-awaited" upturn in DRAM memory demand to materialize in significant fashion.

In addition, on top of Danely's newsworthy shift, three colleagues, all rated at five stars by TipRanks, reiterated "buy" ratings or their firm's equivalent. All three also increased their price targets. The group includes Mitch Stevens at RBC Capital, Sidney Ho at Deutsche Bank, and Medhi Hosseini at Susquehanna. How's that for consensus? I am not even close to done. There's plenty more.

The parade of positive comments actually dates back to December 14th when Toshiya Hari (5 stars) at Goldman Sachs reiterated his "buy" and upped his PT from $77 to $83.

Anyway, even after a strong run over the last couple of months, at 18 times forward looking earnings, Micron is cheaper than the S&P 500 and cheaper than the entire semiconductor industry. I get it. Micron is not Nvidia (NVDA) , Micron is not Advanced Micro Devices (AMD) , Micron is not Qualcomm (QCOM) . All of these and other firms do certain things well, such as 5G smartphones. artificial intelligence, machine learning, automotive, cloud infrastructure, gaming and personal computing, but what Micron does well is memory, and if DRAM is about to get hot, or possibly hotter than NAND, then Micron, which in my opinion is better positioned, is even cheaper than memory rival Western Digital (WDC) .

About the only industry name cheaper than Micron right now is Intel (INTC) , and that's for good reason. They have done a terrible job staying not ahead but even abreast of the game, and their competitors have been eating their lunch.

I think also that a change in leadership in DC is good for a firm like Micron, or any firm that does or did a lot of business in or with China or Chinese firms. I don't think anyone expects Joe Biden to be nearly as tough on trade with China as has been Donald Trump. Speaking not for the nation, or potential U.S. job creation, but for Micron, that's a positive that may not even be priced in. 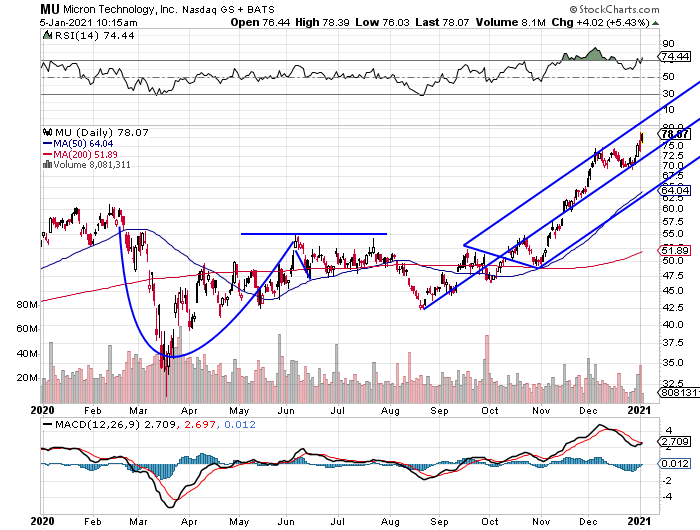 Charting the past year, we see a cup with handle that failed to breakout, forming short-term resistance instead in July. What we then see is the formation of a Pitchfork starting in August... that if seen for what it was at the time (I did not), has worked like a charm.

I do not like buying stocks that run into earnings. My thought would be that if you need equity, then buy something small ahead of the numbers and then something after. I would also, for the crowd that must own equity, encourage writing something against the position in the way of covered calls just to reduce net basis.

What I am really thinking of doing is writing a couple (not enough to ruin me) $73 MU puts expiring this Friday. These are still trading for more than a buck. If the shares are shoved back at least my net basis would be less than $72. If the shares never hit $73, I keep the premium and (in a pretend non-Covid world) take the bride out to dinner.

(JPM, NVDA, and AMD are holdings in Jim Cramer's Action Alerts PLUS member club. Want to be alerted before Jim Cramer buys or sells these stocks? Learn more now.)

Get an email alert each time I write an article for Real Money. Click the "+Follow" next to my byline to this article.
TAGS: Investing | Markets | Stocks | Technical Analysis | Trading | Semiconductors & Semiconductor Equipment | Technology | Technology Hardware & Equipment | Earnings Preview