All about cash flow? Or was it my Uncle Leo? I had not been long General Electric (GE) for quite a while. I had not written on the name in a bit. Some time after the pandemic, I realized that every time the shares dropped in between $5.50 and $6, the public stepped in and bought them. On the last go-round, I bought them too. I can't tell you how this plays out. I can't tell you that CEO Larry Culp can pull off the miracle and save an iconic American company, but I can tell you that I think highly of Culp as a corporate leader. Heck, I can't even tell you that I bought these for the dividend, because the firm just barely pays one.

I bought these basically because the shares showed signs of finding a level, and my Uncle Leo told me to. Even sent me a few bucks to buy some with. His generation believes in a name like General Electric. That doesn't make them wrong. Uncle Leo is a smart guy, and a shrewd investor. He sees not value, but a risk/reward scenario slanted more one way than the other. There are simply many more numbers higher than $6, than there are lower, if one assumes a floor of zero. My Uncle Leo, by the way, is a really good guy. A really good guy.

Shares of GE surged on Wednesday. Yes, sixty-five cents to the upside is surging for GE these days, surging more than 10%. GE CEO Larry Culp had been speaking from the Morgan Stanley Laguna Conference. Culp plainly said that he sees positive free cash flow for the company for the second half of this year. He also said that this will set the stage for positive free cash flow for full year 2021 as well. This is a big deal, and was not expected. Analysts had been looking for cash outflows of more than $650 million for the third quarter alone, and then inflows in the fourth quarter.

It's no secret that pre-pandemic the standout business segment of this conglomerate had been its commercial aviation unit. GE reported on July 29th, and at that time, Culp had acknowledged a macro environment that could weaken, as well as a lengthy recovery for the firm's aviation business. The result? GE burned through some cash the first half of this year. A lot of cash, Try $4.3 billion worth. GE Aviation had announced earlier this year the intention to reduce payrolls by 25% or roughly 13K individuals.

There was also news on that front on Wednesday, unrelated to the conference that Larry Culp spoke from. GE Aviation has entered into a long-term agreement with the Barnes Aerospace unit of Barnes Group (B) to build component parts for the LEAP engine program. Never heard of LEAP?, or Barnes? That's okay. These are the engines used by both the now infamous Boeing (BA) 737 Max aircraft and the Airbus (EADSF) A320 Neo. So, while demand for aviation remains quite muted, there is progress at least on this level, and that does set up a business for whatever shape the next normal might take.

In a related news, Raytheon Technologies (RTX) , the parent company of Pratt & Whitney, a key competitor in the aviation engine business, announced the layoff of 15K employees. Analysts expect it to take almost as long for commercial flight to return to 2019 levels as economists expect the Fed to take to provoke 2% consumer inflation. 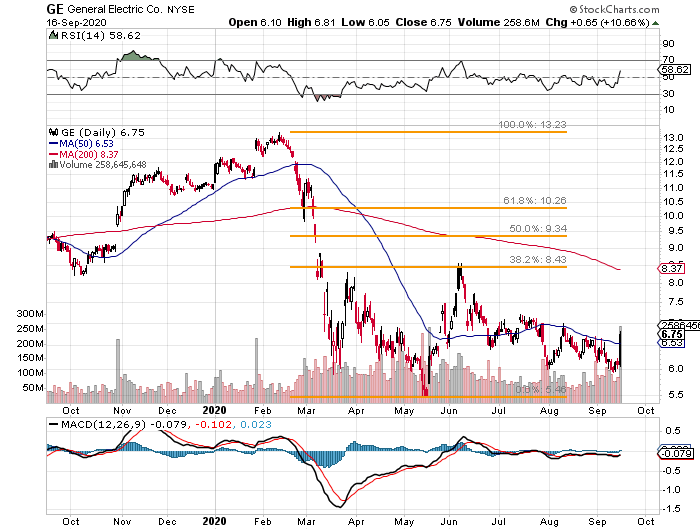 These shares like to paint within the lines. The selloff that lasted from mid-February through mid-May actually provided for a near perfect Fibonacci retracement by mid-June. Then things got ugly once again. The most interesting thing about GE that I take away from Wednesday is the retaking of the stock's 50 day SMA of $6.53. Trading volume visibly increased later in the day as this line was crossed, meaning that in my opinion, managers - both human and artificial - probably jumped on board, creating some momentum.

Is it too late to get involved? I still think the risk/reward scenario favors bets on the long side. I do see these shares eventually making another run at levels above $8. That would involve the Fib spot where the shares have already failed and the 200 day SMA at $8.37. This means investors have to have patience. For me, and for my Uncle Leo, this is one name that you stuff in the portfolio and forget about.

If the size of the position is kept manageable, this is one where if it trades off a couple of bucks, you may not even notice it in your P/L over time, but if one day you look and you see an $8 handle, or maybe even a $10 spot? You'll say "Uncle Leo!!"

Get an email alert each time I write an article for Real Money. Click the "+Follow" next to my byline to this article.
TAGS: Investing | Stocks | Technical Analysis | Trading | Aerospace | Industrials