Our G-20 trade is working well. Monday morning, both Apple (AAPL) and Caterpillar (CAT) were among the Dow Industrial Average's top performers. The semiconductor names all roared as well. Micron (MU) , Qualcomm (QCOM) , Nvidia (NVDA) , Advanced Micro Devices (AMD) , Broadcom (AVGO) , and Skyworks (SWKS) were all higher in the early going by a rough 5% or more.

Several of those names were among the weekend trade that I had laid out. In this morning's Market Recon, I discussed taking profits on short-term trades, and why I felt that is part of one's discipline. Now, assuming that enough of you are either long Nvidia, or at least have an interest in the name, let's take a look under the hood and make a more determined decision here.

Traders will recall that Wedbush analyst Matthew Bryson initiated coverage of both AMD and NVDA on Thursday at "Outperform" (I am long both). For AMD, Bryson posted a $35 price target. You all know how I feel about Lisa Su. This article, however is about Nvidia. For that stock, Bryson's price target is $184. What you want to know is if it's too late to get in. Perhaps, but there is some reason to invest, Let's consider.

In his note, Bryson writes: "As we believe Mellanox (MLNX) only booked about $130B in NIC Ethernet sales in CQ418 (due to the downturn in hyperscale spend), we believe at least 50% overall growth over the next few (2-3) years in probable with 100%+ growth possible for Mellanox in this market." You'll also recall that Nvidia announced the firm's intention to acquire Mellanox for $125 per share ($6.9  billion in cash) back in March. Nvidia expects this deal to be accretive to non-GAAP gross margin, earnings per share, and free cash flow immediately upon closing. The hold-up? China.

In May, Nvidia filed for approval with the Chinese State Administration for Market Regulation regarding this acquisition. There has been a belief that China could slow down or delay completion of this deal. Perhaps even deny. The fact that Nvidia is a U.S. firm and Mellanox is Israeli has nothing to with it. The two do business in China, and not only are tariffs a potential problem, the Huawei ban certainly is.

What Nvidia is known for is higher end quality in providing chips (CPUs, GPUs) to those developing artificial intelligence, machine learning, cloud gaming, autonomous vehicles, and the data center. Maintaining this elite level as far as quality is concerned, in order the better compete against the likes of AMD in gaming and mining, and against Intel (INTC) in data processing and artificial intelligence, is what makes the Mellanox deal crucial.

Unfortunately, earnings have been tough on Nvidia of late. Two straight quarters of contraction in both EPS and sales as inventory levels have been an issue across the entire industry. It is probably key to note that pricing for high end gaming chips has stabilized. For the full fiscal year, Wall Street sees EPS of roughly $5.32 (-20%) on revenue of $10.98 billion (-6.2%), so there is not much of a catalyst... unless Mellanox, a firm that analysts expect to report full year sales of $1.26 billion on it's own to the mix. Nvidia understands the need to buy growth and that is precisely what they are trying to do. 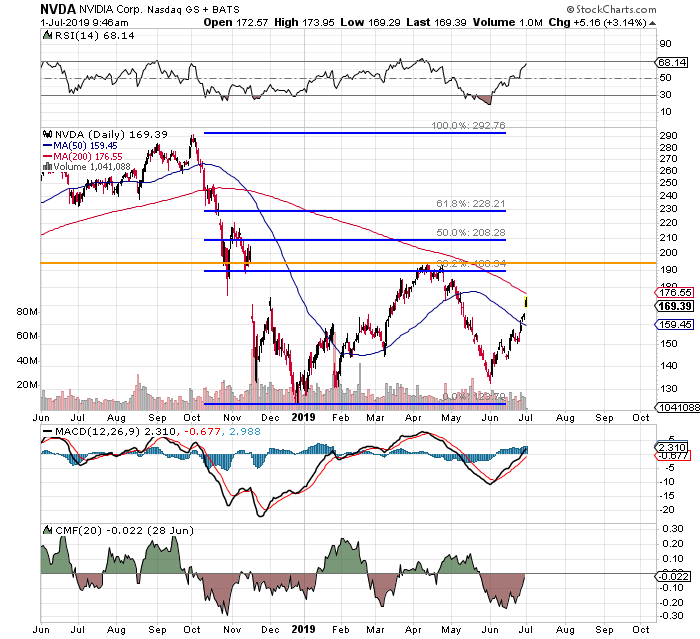 What I wanted to show you is this. Coming off of the great selloff of late 2018, Nvidia has formed a Base of Consolidation. The top of this base would be around $193. Others might see that as a Fibonacci retracement that merely overshot the 38.2% level by a small amount. My idea for trading Nvidia is this: The stock will not really be out of the woods until there is a take and hold of that $193 level. Long way off. Until then, there is absolutely nothing wrong with trading the name.

Remember Market Recon this morning? I took 40% off of this position right out of the gate today. No mercy. Right now, that looks prudent. By the time this piece hits publication... who knows? The point is that I respected my own discipline for short-term trading. Now I am free to do as I please, with risk that has been reduced to the point where it won't ruin my quality of life if I am wrong about Mellanox eventually adding value.

Some help? A trader long at least 100 shares could knock a rough $3.40 off of net basis simply by selling one August 16th $190 call against the position. If the shares are called away, the trader essentially nailed the top of the current range with the out. Just a word to the wise - Nvidia can be a tough name to expose oneself to the dangers of selling naked puts. (Naked puts are short positions in puts without the corresponding protection offered by a like-sized short position in the equity.) I may go there once in a while, but there will always be stress even if one pulls out the "W".

Get an email alert each time I write an article for Real Money. Click the "+Follow" next to my byline to this article.
TAGS: Investing | Markets | Options | Stocks | Technical Analysis | Trading | Semiconductors & Semiconductor Equipment | Stock of the Day

Broadcom Could Rally to New 2020 Highs

Assuming AVGO trades sideways for a bit, traders could use that consolidation to go long.

Once Considered the Greats, These Pot Players Now Look Burnt Out

Several companies that had appeared promising are now blaming the Covid-19 crisis as they fail to turn over a new leaf for the better.

Let's review the charts and indicators of SWKS.

What stands out is the multiple bearish indicators and price action.