Let's be straight with each other. I think Tesla (TSLA) is the future of the automobile business. Electric vehicles will eventually be the majority of personal vehicles used for household use, At the commercial level, meaning fleets of buses or cargo moving trucks, the turnover will, in my opinion, be even more complete. Some day. The worm is turning, but this is still someday.

I have never invested in the stock. I have often traded Tesla, the last time a short position that was taken near the old highs this past January. That one was a winner, but if I were to look back at all of my trades in that name over many years, which I am not doing right now, I would estimate that I have shorted TSLA probably twice as often as I have gone long the shares, and that the majority of those short positions have probably lost money, even if there was an occasional extra base hit worked into the mix. The long positions, though fewer in number, have become more frequent in recent years, and to be honest, I really do not remember a loser in this name when on the long side. That's why this urge to short the stock up here leaves me a bit uneasy.

As I have said above, this firm stands for quality, is on the right track, and the CEO, if eccentric, is both a genius and highly aggressive.

Just this week, highly rated Daniel Ives of Wedbush Securities expressed thoughts that even with a drop in demand for Tesla's products seen in the state of California, that increasing demand in China, and demand elsewhere in the U.S. as economies reopen in the wake of the Covid-19 pandemic still going in many states, will afford Tesla bulls to offer the firm a pass on that news. Wedbush, just fyi, has a base case $1000 price target on the name (mom, we're home) and a bull case target of $1500. This, my friends, comes with a "neutral" rating. Gee whiz.

The very next day, which was yesterday (Thursday), the also very highly rated Phillippe Houchois of Jefferies increased his price target from $650 to $1200. This is known on Wall Street as "throwing in the towel." Houchois acknowledged that the gap between Tesla and the competition is only growing from the underlying products to battery technology to capacity. Houchois adds, "We see Covid-19 as an accelerator of the transition to EVs (electric vehicles) and renewables, from consumers and public policy. Tesla remains significantly ahead of peers in product range, capacity and technology. Near term, EV friendly incentives in the EU and lower priced Model 3 support H2 (second half) volume, making Tesla more resilient than peers."

Now, news breaks that Tesla is looking for tax breaks or other incentives. The idea is to build a new factory of up to five million square feet, and will be built with the flexibility to manufacture either the Cybertruck, and/or the Model Y. Currently, it is being reported that the firm is in negotiation with officials in Travis County, Texas, looking for what might add up to $68 million in these tax breaks over a decade prior to investing potentially $1 billion in building this plant. Tesla is said to also be in negotiation with Tulsa, Oklahoma, in finding a location for the building of this facility. 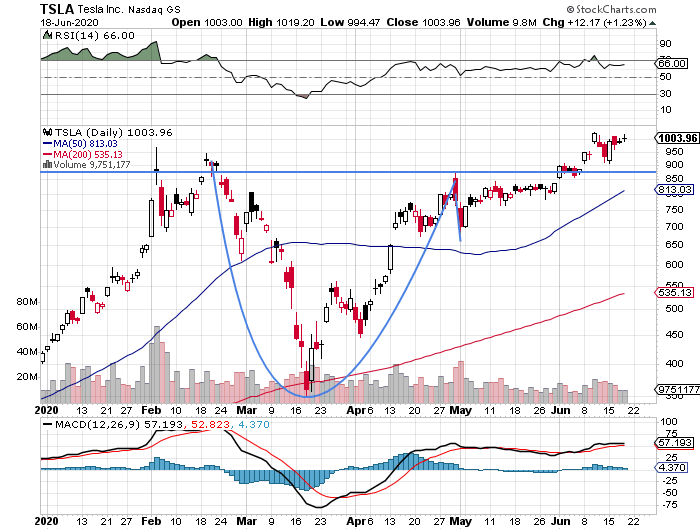 As readers will see, TSLA has successfully broken out of a cup with handle inspired $870 pivot point. If I had placed this pivot correctly, that would by my method place a target price for the "long" crowd in the $1040's. So, we are getting close. The shares are trading at $1016. At this point, these shares are very close to being technically overbought. Again. The daily MACD has been non-committal for about six weeks. This just means for me, that as a trader, this current run that has started to move sideways, may be almost over for now.

That said, for investors... I think you remain in good shape. 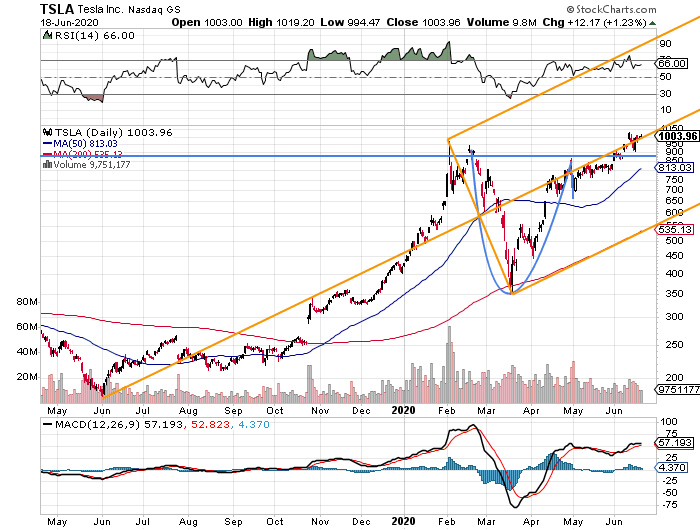 For those who buy TSLA and hold on for dear life, using the January peak and the March low as guides, the shares remain almost precisely dead center and on trend using a Pitchfork model going back over a year.

My plan is to enter into an entry level position on the short side at some point this morning. Readers will note that I almost always enter into my positions incrementally. That is for normal, long side positions. We never, ever add to short side positions in highly priced, volatile names. Not ever. If we are wrong we eat the loss and move on. I hope to get $1025 for the short. The idea is to cover the shares below $950 by next week. Or panic at $1050.

Get an email alert each time I write an article for Real Money. Click the "+Follow" next to my byline to this article.
TAGS: Short-selling | Investing | Markets | Stocks | Technical Analysis | Trading | Automotive | Transportation | Analyst Actions | Elon Musk