Will the correction in cannabis stocks matter? Rev sees it as a rotation. I don't completely disagree, but I also see it as a growing problem.

Let's be honest, if a stock was up 1% one day and down .40% the next, we wouldn't give it a second look. Heck, even up 10%, then down 4% would be seen as normal. But after we get moves of 100% with retracements of 40%, it gets attention. Even worse, it creates a lot of trapped longs. If you buy the either of the first two moves, you probably aren't too panicked. I'm sure you're a bit worried on the 4% dip but it is nothing compared to buying something like Tilray (TLRY) yesterday in the $60s or $70s. How about the folks that paid $4.50 or more for Sundial Growers (SNDL) in the pre-market? Or Organigram Holdings (OGI) above $7.

We now have a big chunk of momentum money locked in a losing position or taking big losses. Of course, those may be the newer traders to the market, but that's money that isn't going anywhere else in the momentum groups. It's also going to give pause to the former chasers. After the first round with GameStop (GME) and the likes, people, even new people, should be learning these spikes will sell off. Silver only lasted a day or two. Cannabis got a solid week in before we experienced aggressive reversals. Neither of those bounces reached the lofty elevation of GME or Koss Corp (KOSS) .

This does cause me a bit of concern with some of the newer SPACs. I'm leaning more towards the "established" names that have been trading for a bit and building a big base. Hyliion (HYLN) is a great example. It's in the EV trucking space but the stock has gone up very little for months now. It's a great looking daily chart with all triggers firing on the buy side for me. But that's still being aggressive. 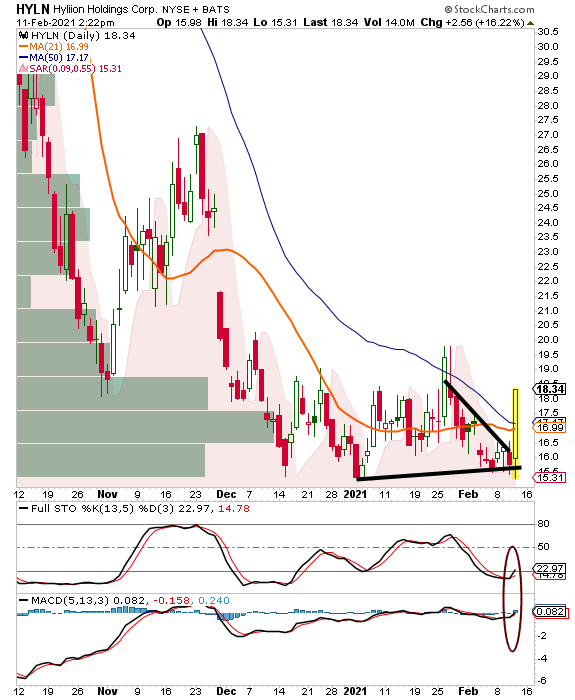 It could be time to look at slightly more conservative names like Accenture (ACN) or Intel (INTC) or even Micron (MU) . I'd even consider Rocket Companies RKT in the $19.50 to $20 range.

That being said, we've gone quite some time without a decent flush. Sure, we could continue to run higher but I'm a big fan of having some cash at the ready right now and a shopping list of big names 10% lower or smaller names 15% to 25% lower. Again, I'm not ready to be aggressively short. I have a few put trades, mostly combination or ratio trades on the books, but I'd prefer to use cash as my "short" or protective position into the weekend.

If the momentum crowd does choose to abandon the market, even for a few days, it may spook the moderate crowd. If you think stocks rising 30% or 40% in a day bother some traders, turn those green moves into red moves and see how it makes them feel. When any resemblance of fear or risk management returns, we'll likely have a sharp, but buyable dip in quality names.