The recent news has been messy. On Friday, Ford Motor (F) sold another 7M shares of electric vehicle start-up Rivian Automotive (RIVN) for about $188M. Ford had sold 8M shares of RIVN earlier in the week following the expiration of that firm's IPO lockup period. Readers will remember that Rivian went public last November at an IPO price of $78, and proceeded to trade above $179 per share within days. The average price for this most recent sale, according to the regulatory filing, was $26.88. Ford is still believed to be long 87M shares of Rivian.

In addition, on Friday, Wells Fargo analyst Colin Langan downgraded both General Motors (GM) and Ford Motor, while drastically reducing his target price for both names. Langan sees rising costs as well as US fuel economy regulation as growing headwinds for both firms. Langan's target price for Ford is now $12, down from $25. Investors looking for consolation can point toward Langan's relatively low rating at TipRanks compared to his peers. Tip Ranks rated Langan at slightly more than one star (out of five) and places him in 5,726th place out of the 7,883 analysts rated by the service.

Ford posted the firm's first quarter financial results back on April 27th. The firm put adjusted EPS of $0.38 to the tape on revenue of $34.5B. The adjusted earnings print beat Wall Street by a penny, while the revenue number (-4.7% y/y) landed precisely upon consensus. On a GAAP basis, this revenue provided for a net loss of $3.1B for a GAAP EPS loss of $0.78. Cash flow from operations was a nasty $-1.1B, badly missing estimates for $+2.8B. Adjusted free cash flow landed at $-600M, also badly missing the $+744M that Wall Street was looking for.

However, and this is a big however... The firm stated at that time that it continues to anticipate full year 2022 adjusted EBIT of $11.5B to $12.5B, which would be up 15% to 25% from 2021. The firm also reiterated full year guidance for adjusted free cash flow to $5.5B to $6.5B. It should also be noted that Ford's poor quarter was "driven" by roughly 53K vehicles that were all but completed, with the exception of necessary semiconductor chips necessary for these vehicles to move toward delivery.

Ford ended the first quarter with a net cash position of $28.6B. Current assets amounted to $106.1B, including inventories worth $14.6B. Current liabilities totaled $90.4B at that time, including $2.6B worth of Long-term debt labeled as current. This left Ford Motor with a current ratio of 1.17, which is fine for a large industry like this. The firm's quick ratio stands at just 1.01, but to be fair, that is a passing grade, albeit just barely, in my book.

Total assets add up to $253B. This includes no entry for "goodwill" or "other intangibles". That means that all of Ford's assets are either physical, or can at least be quantified. We like that. Total liabilities less equity come to $207.9B, including $88.4B in long term debt. That's an eyesore and prevents me from enthusiastically endorsing this balance sheet. That said, tangible book value works out to $11.19 per share, not too far below Friday's last sale of $13.50. That is striking.

Ford Motor remains mired in a downtrend despite Friday's rally. 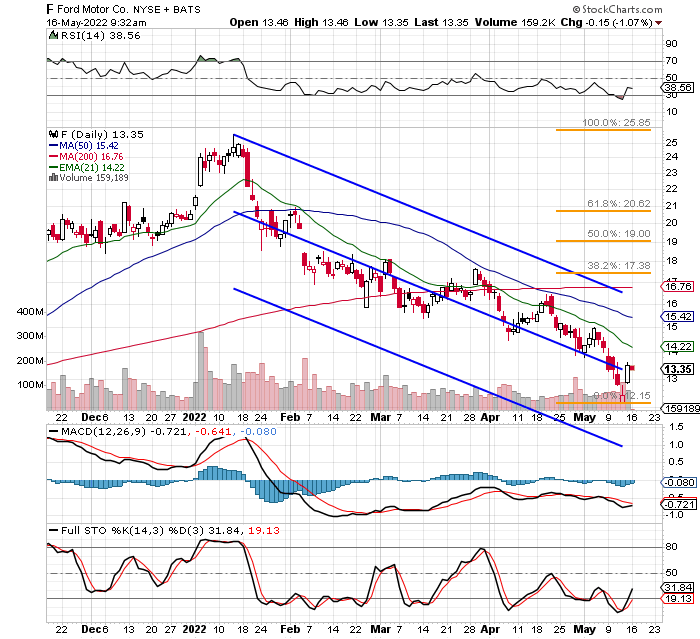 On the other hand, the shares trade at seven times forward looking earnings, trading at 1.2 times tangible book, yielding 2.22%. These metrics, debt and rising expenses aside, make the firm seem inexpensive.

Then there's the energetic, enthusiastic CEO who has changed the losing culture at the firm to something more positive. It is Jim Farley who has driven the firm's leadership in developing electric vehicles with a focus on replicating vehicles that regular people already like to drive such as sports cars and pick-up trucks. All while not forgetting to provide the public with work-intensive type vehicles.

I really, really like Farley. I really, really do not like what Ford Motor as well as all vehicle manufacturers (all industrials) face in the near to short-term future. I don't think I need a car company on my book right now. I will continue to trade Tesla (TSLA) , but I haven't held a position in that stock for more than a day or two in weeks. That said, I do believe that the risk/reward proposition is starting to think about smiling favorably on Ford. Is it time to jump back in? For me, the answer is not yet.