The stock price peaked in January. January of 2018 that is. High reliance upon not just domestic, but economic growth made the name susceptible. As growth around the globe slowed, the condition of cross border trade between the U.S. and China deteriorated, creating additional hurdles for far more than just two economic super-powers. Then there was the "Death Star". On top of all of this, Amazon (AMZN) , champion of all things e-commerce and disruptor extraordinaire decides not only to ship more of their own parcels themselves, reducing customer demand for transportation services, but to compete in the space. Not good. So, this is to this point a sad tale that we must tell. Let us get to the telling.

This past March, FedEx (FDX) (my ancient brain still tries to say Federal Express), reports fiscal third quarter earnings. Sales continue to climb, but slow dramatically. Profitability contracts for the first time since the summer of 2017. Earnings per share and revenue both disappoint versus expectations. The firm is forced to lower guidance for the full year, citing both slowing economic growth and trade wars as culprits. Analyst after analyst defend the firm in the wake of that call... the stock rallies hard over two month's time, only to selloff hard once again.

One analyst seems now in hindsight to have nailed it in the wake of that event. JP Morgan's Brian Ossenbeck downgraded those shares to Neutral, while cutting his price target to $202. The rebound peaked just under $200 on April 19th. That was when rival United Parcel Service (UPS) reported a weak first quarter. Since then UBS came out with a downgrade to Sell with a $161 price target. That target was hit late last week.

May The Day Never Come

May brought a tougher environment. Amazon offers a subsidy to it's own employees interested in starting and operating the own parcel delivery businesses. Walmart (WMT) moves forward with free one-day delivery without requiring any kind of membership. Then Huawei.

We enter Tuesday morning trade with Huawei reviewing the firm's relationship with FedEx after two parcels containing corporate documents sent from Japan to China were instead diverted to the United States. Two other packages also containing corporate mail were sent from Vietnam to China, and were nearly diverted to the U.S. before the error was discovered. One can understand the sensitivity here. It's no secret that the U.S. government had recently place Huawei on a list banning inter-corporate commerce with the Chinese telecom giant based on a belief that Huawei had been involved in activities contrary to U.S. national security. Though FedEx has already publicly apologized for mis-routing these parcels, Huawei is asking the obvious questions. Questions that one might think could hurt FedEx, particularly in Asia.

Is There A Play Here?

Is a name engaged in what appears to be a business in decline, evidenced by contracting earnings on slowing sales growth while now embroiled in controversy, worth "a shot" here? The knee-jerk reaction would be a quick "bet it, kid, you bother me." Then again, the time to buy often ends up being the time when nobody wants to.

The name trades at just nine times forward looking earnings. That's cheaper than UPS, cheaper than Air T (AIRT) , and cheaper than Air Transport Services (ATSG) . Management owns 9% of the firm which is very high for a large cap and is something that I like to see. Cash flow remains robust. Unfortunately margins are not, but they are in line with current industry norms. The firm carries more debt than I like to see but runs with healthy ratios, so there is no current evidence of any inability to meet obligations moving forward. 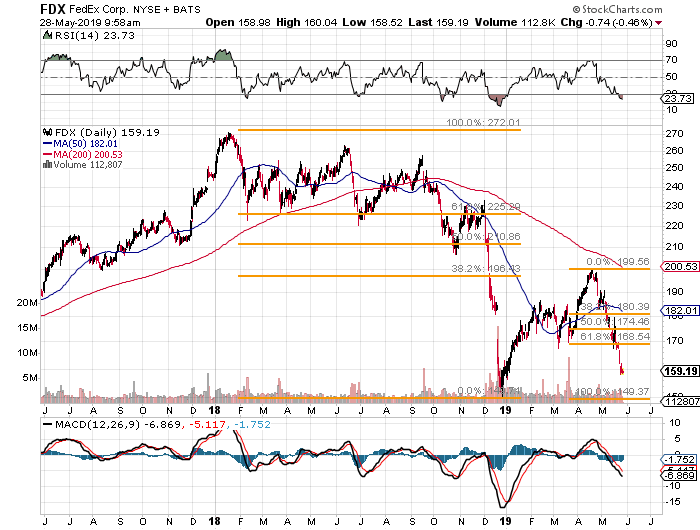 What is obvious that these shares need to base somewhere after losing the 50 day SMA as well as all standard Fibonacci retracement levels. Perhaps, a double bottom forms in the $150 area? Without seeing a basing pattern first, I have trouble allocating capital toward an equity position at this time. FedEx is expected to report fiscal Q4 earnings sometime during that last week in June. A mildly optimistic, yet risk averse, investor who thinks the shares bottom on this news could look at purchasing June 28th $160 calls for roughly $5.35, and sell a like amount of June 28th $170 calls for about $1.95.

While the net debit here still amounts to $3.40 (or $340 per a one contract spread), that's the size of the risk involved. The play is to try to win back $10 (or $1K per the same one contract spread). There can be no loss grater than the $3.40, nor any gain larger than the net $6.60 return prior to the expiration date.

Get an email alert each time I write an article for Real Money. Click the "+Follow" next to my byline to this article.
TAGS: Investing | Markets | Options | Stocks | Technical Analysis | Trading | Transportation | China | Stock of the Day