Chills down your spine. Anyone who ever went to school. High school. College. Beyond. Even if well prepared. You dreaded final exams. For those of us who do track corporate earnings, quarterly performance for Deere & Co. (DE) for this quarter... had been looked forward to in about the same manner that an eleventh grader might anticipate a standardized test in let's say... Chemistry. Yeah, that.

For the firm's fiscal second quarter, DE reported revenue that grew 5.4% year over year and beat expectations. That higher revenue, however... resulted in disappointing profitability. EPS of $3.52, a miss of 11 cents was the final score. On the surface, there is a lot of solid execution. Construction & Forestry +11%, Equipment +5%, however Agriculture & Turf... that is where the problem lies.

The Agriculture & Turf segment, which is about 2.4 times the size of the Construction & Forestry segment only saw sales growth of 3%, and that 3% growth produced operating profit that printed in contraction at -4%.

So, even at 11 times forward looking earnings, is DE cheap? Hard to say. Cash on hand amounts to $3.48 billion, total debt runs at more than $44 billion. Don't get me wrong. The firm can pay their bills, I think... but revenue for the quarter was $10.27 billion. That's a lot of debt. The firm returned $942 million to shareholders for the quarter in terms of dividends and share repurchases as well. Things that make you go hmmm.

One thing going for Deere is honesty. CEO Samuel Allen spoke on Friday morning. He said, "Ongoing concerns about export market access, near-term demand for commodities such as soybeans, and a delayed planting season in much of North America are causing farmers to become much more cautious about major purchases."

The firm reduced their own guidance for fiscal year 2019 nets sales growth from 7% to 5%. Guidance for net income has now been whittled from $3.6 billion to $3.3 billion. The share price has reacted accordingly. 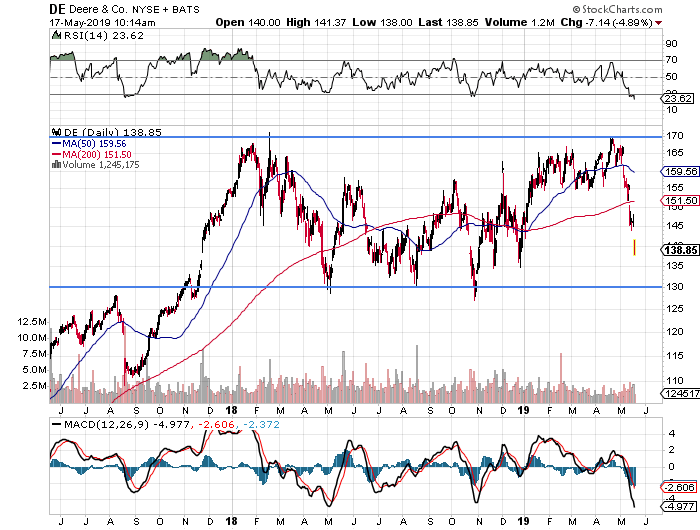 You see this period of consolidation that seems to go on eternally? We're talking a year and half, dudes. The shares now sort of almost threaten the lower end of this 40 point range. Still $8 away, but that spot cracks, and you think this is ugly?

Relative Strength tells us that this move is short-term oversold. That's positive. The daily MACD looks like something out of the graveyard, so don't look at that. The shares may linger for a bit here, in my opinion. The test of the $130 level will come, if it comes when the 50 day SMA closes in on the 200 day SMA. You still have some sand in the hourglass there.

Even with that fat dividend, if I were one that expected this name to remain within the confines of this 18 month range, I would rather go the options route than claim an equity stake.

This is only if one thinks that a trade deal with China is reached in 2019. That would obviously flood money into this name.

Note: In short, the trader has created the potential to purchase 100 shares at $140 by January, while allowing for the risk of having to purchase 100 shares at $130 by expiration. Profit by January would be limited by the sale of the $170 call, but that's how we bring the expense down to manageable levels for the retail investor. Of course if the purchase of 100 shares is exercised by the investor at $140, or against the investor at $130, 62 cents would have to be added to figure net basis. That could be more than made up by holding the shares through one dividend payment.

Get an email alert each time I write an article for Real Money. Click the "+Follow" next to my byline to this article.
TAGS: Earnings | Economy | Investing | Markets | Stocks | Technical Analysis | Trading | Agriculture | Industrials | China