The sound of music? You may or may not have caught me on Fox News on Thursday afternoon. I was the one in the suit standing in front of the New York Stock Exchange who was less than ecstatic in the minutes after the closing ball had pealed its last. No, I am no swami who could see the immediate future. I just saw good reason for some market volatility through the first quarter of 2020. I did not like what smelt to me like careless demand at the point of sale late in the session. Maybe it was my imagination, but the rest of the panel seemed less than thrilled with my lack of enthusiasm.

If the coming fourth quarter earnings season that will land just as a fully priced in Phase One trade deal with China is signed were not enough, there is the likelihood of a "pending" taper tantrum come the March 18th FOMC policy decision as at that point the Fed will likely have to start planning a pullback from their balance sheet expansion program should overnight liquidity issues not resurface. This will potentially allow a renewed flattening of the all important 3 month/10 Year yield curve. That is what was on my mind.

Domestic large caps surged into Thursday's close. Too much flow funneled through a pinhole. Just take a look at the last half hour... just take a look at where Relative Strength closed for the day. I had originally penciled in Monday for the selloff. Thursday's late afternoon strength caused me to move that projection up just a bit. 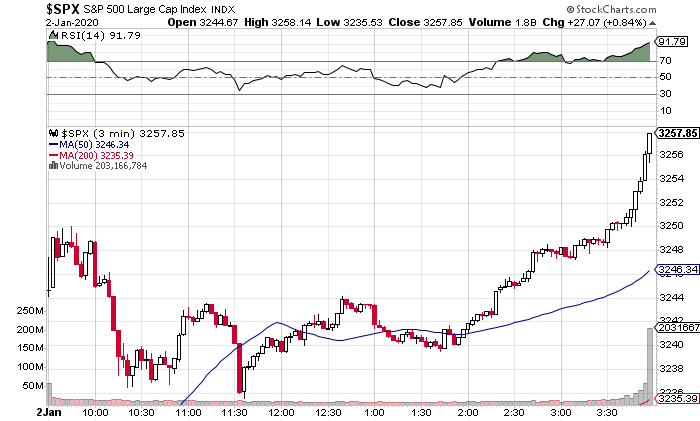 Industrials were hot. Information Technology was hot. Semis or Software? Both. Discretionary names were hot. Only more defensive sectors closed lower, oh and small caps too. As the Nasdaq Composite soared 1.3%, the Dow Jones Industrial Average 1.2%, and the S&P 500 0.8%, both the S&P 600 and the Russell 2000 moved just a smidge to the downside. This caused a drag on market breadth that one might not expect on such a powerful looking day. Advancing volume beat declining volume at the New York Stock Exchange by less than 4 to 3. Thought you might take advantage of Thursday's closing levels? You may get that chance, heck anything is possible. Zero-dark 30 hours trading says that for now, at least... that ship has sailed.

We were watching college football. Suddenly, one of my sons said... "Something happened in the Middle East." I checked the markets for both S&P and WTI Crude Oil futures... Yep, something had happened alright. The kind of news that makes the hair on the back of one's neck stand up. The kind of news that forces older men to check on maximum age requirements for uniformed service over and over again. As if it will change. Just in case.

President Trump had ordered an airstrike targeting a convoy near Baghdad International Airport that has apparently killed Iranian General Qassim Soleimani, a special operations leader of the foreign wing of Iran's Islamic Revolutionary Guard Corps, as well as Abu Mahdi al-Muhandis, the deputy commander of the Iran-backed militia known as the Popular Mobilization Forces (PMF). A major victory for U.S. intelligence services in that they were aware that the general was operating in Baghdad, Iraq, and that his location was pinpointed. The move does come with overt risk attached, which does extend to financial markets.

The page now turns. The relationship between Washington and Tehran now moves to a new, heightened reality. The U.S. embassy in Iraq has urged U.S. citizens to leave the country, and not to approach the embassy. Iran has vowed revenge for the loss of their general. It is key to note that General Soleimani was considered central to Iran's influence throughout the region, and was believed to have orchestrated attacks on coalition bases in recent weeks that had caused U.S. casualties. A statement, released on Thursday night by the Department of Defense indicated that Soleimani was actively planning attacks on U.S. diplomats and service members in Iraq. The State Department blames Iranian forces for as many as 603 U.S. military deaths in Iraq since 2003. In a 2008 letter to then Secretary of Defense Robert Gates, U.S. General David Petraeus described Soleimani as "a truly evil figure."

Then the U.S. view is that this strike was defensive in nature, broad expectation is that Iran, a nation already under intense economic pressure from U.S. sanctions, will act in revenge at some point.

Unless one watches reality TV all night, then one would be well aware that there has been a sharp reaction across financial markets. I stare at the man reflected at me from my office window as late night melts into early morning. Oil futures are now trading almost 4.5% higher. Gold futures have run more than 1.5%. The U.S. Dollar Index has retaken the 97 level. Equity index futures are in beatdown mode. The raccoons have quieted, but not the sellers. S&P futures are trading a rough 45 points below fair value. DJIA futures are trading hundreds of points lower. The spread between yields paid by the 3 month T-Bill and the 10 year Note have collapsed to a rough 28 basis points on Friday morning, after threatening the 40 basis point level earlier this week. That spread, my friends remains our guide.

What you have is a geopolitical event that markets were not positioned for. You have that, and a whole lot of folks sitting on a whole lot of profit. It's early, and I'm not always right. It would appear to me however, that this year's Santa Claus rally has ended a day ahead of schedule. Geopolitical threats are seemingly ever present. That said, when events go down, they almost always feel like a surprise. This is why though, at times it is difficult, I am never completely flat the oil patch, nor aerospace and defense. This morning, that is my hedge. That may parry the blow.

Readers well know that I have long favored Lockheed Martin (LMT) , and only recently started rebuilding my long in Kratos Defense (KTOS) . As for energy, I remain long BP PLC (BP) , Royal Dutch Shell (RDS.A) , and recently swapped out of Chevron (CVX) into Exxon Mobil (XOM) in a pairs trade that I wrote up for you meant to expose my portfolio to a higher dividend yield across more shares. I also hung on to that Micron (MU) short that after the open will likely appear to have formed a double top.

I had planned to discuss the "breakouts" seen in Mastercard (MA) , Disney (DIS) and Apple (AAPL) on Thursday, and try to make a technical case for whether or not those three could hold new ground. I think maybe we wait and see how far this marble rolls first. Don't forget that the Fed is out in force (Three speakers and the Minutes) for the first time since the holiday season started later today. That could be a wildcard.

(BP, Mastercard, Disney, and Apple are holdings in Jim Cramer's Action Alerts PLUS member club. Want to be alerted before Jim Cramer buys or sells these stocks? Learn more now.)