It is hard to believe the start of the last month of 2022 will commence tomorrow. It has been a trying year for investors, one of the worst in recent history. The highest inflation levels in four decades and aggressive monetary tightening have sunk equities and put the economy on the brink of recession as we head into the New Year. 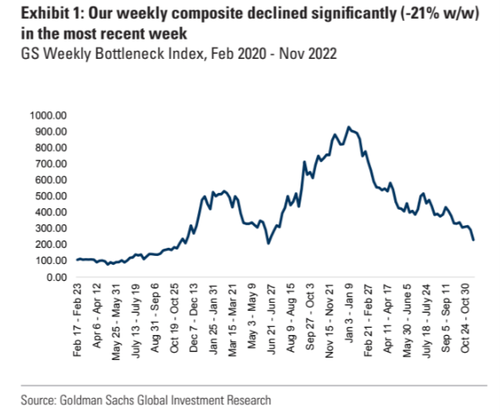 One positive as we head into 2023 is supply chain bottlenecks seems to be finally easing. Goldman Sachs proprietary supply chain tracker, above, continues to drop as do shipping rates. This is good news for most manufacturers and other parts of the economy. Especially those without major manufacturing footprints in China like Apple (AAPL) which continue to be significantly impacted by the lunacy of the Zero-Covid policies and lockdowns in the Middle Kingdom.

Unfortunately, a good portion of the clearing of supply chain issues is due to plunging global demand. As we head into the coming year, Europe seems already in a recession as they head into a long winter with inflation running at 10%, thanks to soaring energy costs. China has its own myriad set of issues and can no longer be counted on to be a global growth engine. That leaves the United States as the best house in a fast-deteriorating neighborhood.

We may have some sort of Santa Claus rally to end 2022. However, I see 2023 getting off to a rough start. Higher interest rates have slowed the housing sector to a crawl and are impacting other parts of the economy such as automobile manufacturing. Layoff notices seem to be quickly accelerating and I believe job growth will turn negative at some point in the first half of next year. Today's poor ADP Jobs Report is a portend of things to come in my opinion.

Morgan Stanley's chief equity strategist and chief investment officer earlier this week was out projecting the S&P 500 could fall into the 3,000 to 3,300 range in the first half of 2023 as earnings projections get ratcheted down for equities in the first few months of the year. He does see the index clawing back to breakeven by the end of 2023.

That view aligns with my baseline view and why my portfolio should have an approximate one third allocation to cash by yearend. I believe there will be much better entry points in the first half of 2023, and I want to have plenty of 'dry powder' to act upon on new opportunities.

I also think healthcare will outperform the overall market as revenue and earnings growth should be less impacted by declining economic activity than most sectors of the markets. I also believe the energy sector, which has been one of the few strong performers in the market in 2022, will be a notable underperformer as demand ebbs.

Ending on a bright note, I think the Fed will stop tightening sometime in the first half of 2023 as inflation levels fall and the country enters recession. This means three and six-month T-bills are a nice use of cash given my view for the first couple of quarters of 2023. Both yield north of four percent.

Get an email alert each time I write an article for Real Money. Click the "+Follow" next to my byline to this article.
TAGS: Economic Data | Economy | Federal Reserve | Investing | Markets | Stocks | Technical Analysis | Trading