We've all been there. At least those of us who played sports on the way up. We play varsity. We move up. The game got faster and more difficult. We adjusted. We moved up again. Finally, and it's different for everyone of us, we get to a level where we are just not good enough. We end up riding the pine, or worse. Last night, investors put Dave & Buster's (PLAY) on the bench. Actually, I think they cut this name from their team. The performance was solid. For the third quarter, PLAY reported EPS of $0.30 on revenue of $282.14 million, both better than consensus expectations. In fact the revenue print showed a year over year increase of 12.9%. A lot better than the broader market.

You shouldn't have. Really. Comparable sales printed at far worse levels than had been expected. A widely expected -0.7% print had been priced into the shares over the past week or so. A -1.3% number, which is what shareholders actually got, was not priced in. You may recall those heady days of late September/early October when in the wake of second quarter results (not to mention increased guidance) the stock price reached it's 2018 highs. The firm did hike the lower end of full year guidance, but going forward...2019 sales guidance remains sort of lackluster.

Bock bock. No kidding. If you did not come in long the name, you might laugh, if you did... probably not. CEO Brian Jenkins blamed chicken wings and football for the disappointing comp sales performance, in a way. For the football season, the firm apparently skipped a successful "All You Can Eat Wings" promotion that they had run throughout the early part of the season last year. As the firm realized this strategic error, they brought back a $19.99 game night promotion that includes both wings and game play. Sounds compelling. Maybe should have stuck with what worked.

Pretty fragile, but as a dad who used to take my kids to Dave & Busters at times that the place was not so busy, I can see it. The place is fun, but there is a ton of competition for fun-based disposable income. If one does not offer the target audience the perception of a good time at a good deal, they can go anywhere. In fact for video games and football, they can stay home. Some of them apparently have. 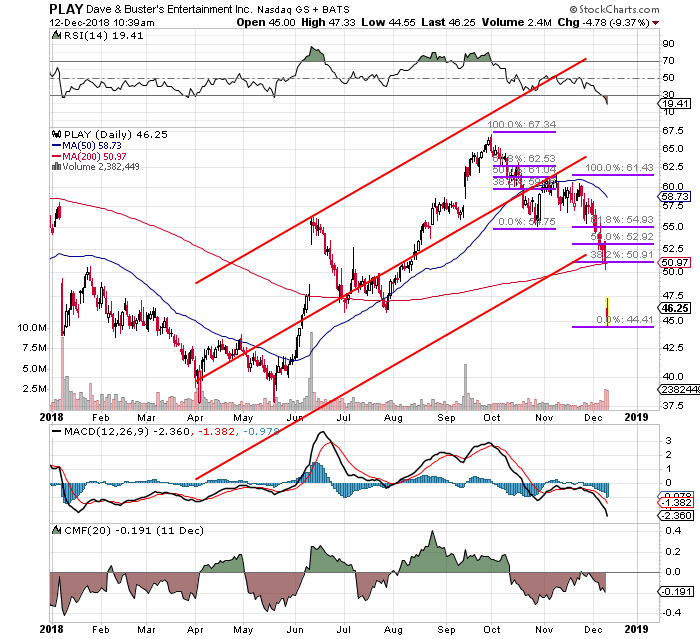 I really don't see the need to rush out and buy this stock at this discount. Perhaps if there was some grand dividend involved, but alas ... there is not. The trend, which had been under pressure, is now truly broken. If this morning's regular session lows prove to be the actual short-term lows, I think the stock runs into trouble at the 50/51 level.

That said, all of your other indicators are now quite ugly. Perhaps the most bullish among them would be Relative Strength, as it is not everyday that you see a number under 20, indicating an incredibly oversold condition.

I am not buying any today. There are enough fish in this sea. If you do like the name here, I would caution you to enter with just a sliver of your intended position size... maybe a tenth to an eighth of where you want to end up. Could be a rough two or three days ahead for this one.

Options for this stock do not trade especially well. If one could get them for under a buck, $47 call expiring this Friday might have some value as a risk/reward type play.

Get an email alert each time I write an article for Real Money. Click the "+Follow" next to my byline to this article.
TAGS: Earnings | Investing | Options | Stocks | Technical Analysis | Digital Entertainment | Restaurants | Gaming