For the three month period ended July 31st, UiPath posted adjusted EPS of a loss of $0.02 (GAAP EPS: $-0.22) on revenue of $242.22M. While, the adjusted EPS print was down from $0.01 for the year ago comp, this number was far better than expected. Revenue generation also beat Wall Street and was good enough for year over year growth of 23.9%.

At least part of the problem is dollar strength for this firm, as it is for so many others. Taken from the press release, CFO Ashim Gupta said, "While our global footprint is an asset to the business, it exposes us to foreign exchange and macroeconomic volatility which is reflected both in our fiscal second quarter results and our fiscal third quarter and full year 2023 financial outlook."

At quarter's end, UiPath ran with a net cash position of $1.721B and current assets of $2.108B. The firm had current liabilities that totaled $460.1M. This brings the firm's current ratio of a quite robust 3.74. Total assets add up to $2.435B, including "goodwill" and other intangibles of $113.04M. This is certainly nowhere near abusive. Total liabilities less equity comes to $585.1M. There is no dent of any duration on this balance sheet.

This balance sheet is as clean as a whistle. Tangible book value amounts to an impressive $1.737B or $3.19 per share. A lot of much larger firms with much higher stock prices can't match that. Now, if the business could just perform as well as the books.

To this point, I have found nine sell-side analysts that have both opined on PATH since these earnings were released and are rated by TipRanks at four or five stars. Among the nine, there are five "buy" or buy-equivalent ratings and four "hold" or hold-equivalent ratings. One of the "buys" and one of the "holds" declined the opportunity to set a target price, so we have seven target prices. The average target price of those seven is $19 with a high or $25 (Terry Tillman of Truist Financial) and a low of $15, twice (Keith Weiss of Morgan Stanley and Keith Bachman of BMO Capital). Omitting the high and one of the lows, leaves an average target of $18.60 across the other five.

The stock was down about 16% this morning. The market itself is still weak. The company has been losing money. The company thinks it will continue to lose money. Yet Wall Street sees profitability by 2024. The balance sheet is golden. Whole lotta cash to burn while trying to achieve that profitability. No debt to worry about just yet.

Don't know if PATH makes it. Do know that this is the kind of business that will have a broad future once fully adopted for the execution of mundane manual tasks. This is the kind of business that I think I can invest in during times like this, when it's not cheap, but inexpensive relative to its recent past... in an obviously different monetary environment. The stock traded at $90 in May of 2021. 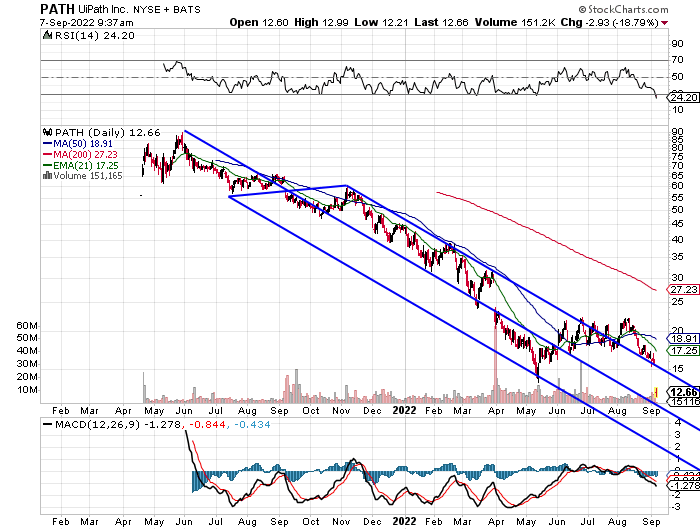 The stock remains mired in a downtrend, and appears to be technically oversold (who isn't?). Let's zoom in... 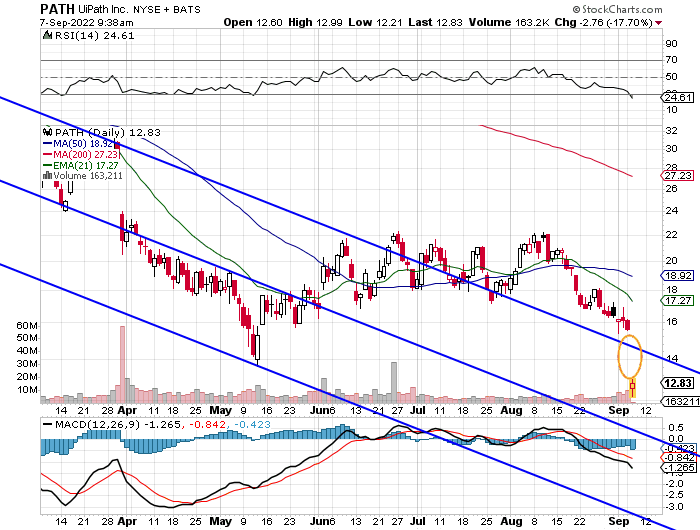 Readers will see that PATH had broken out of my pitchfork and tried to base from May 2022 through Tuesday. This gap-down open has changed all of that. I don't know where this stock bottoms. I do know that I am seeing this weakness as the beginning of what could be a (perhaps long) period of opportunity.

I am going to buy some today. It may trade down into the single digits before it regains its footing. If the balance sheet is still pristine then, I'll probably buy some there too.

Get an email alert each time I write an article for Real Money. Click the "+Follow" next to my byline to this article.
TAGS: Earnings | Investing | Stocks | Technical Analysis | Trading | Technology | Manufacturing