Three weeks ago, I wrote to you with Tesla (TSLA) trading lower, and used Bob Lilly's (Dallas Cowboys) 29 yard sack of Bob Griese (Miami Dolphins) in Super Bowl VII to get my point across. As the stock, and CEO Elon Musk twisted and turned from last December through early June, the shares kept moving lower. What if Elon Musk is not Bob Griese, but Steve Young instead. Late October of '88. San Francisco QB Steve Young dropped back to pass into a pocket that collapsed too quickly. Nearly sacked at the line of scrimmage, Young broke at least five tackles, and left a couple of other Minnesota Vikings faked out of their socks, as he ran a lot more than 49 yards on what went down as a 49 yard touchdown run. Maybe, that's who Elon Musk is. Maybe, he does stumble over the goal line in the most unlikely but triumphant way.

"I want to be clear, there is not a demand problem. Absolutely not." CEO Elon Musk could not have made a more definitive statement from Tesla's annual meeting with shareholders on Tuesday (last) evening. Musk went further... "Sales have far exceeded production and production has been pretty good so we're actually doing well." Really? I thought the narrative around this company had been rather negative. You may recall Morgan Stanley lowering the firm's worst case scenario for the TSLA share price from $97 to $10, and Citi's "full bear" scenario price of $36, while both of these banks maintained much higher target prices. That came after Q1 earnings released in late April that showed a ghastly negative EPS surprise of -$2.90 on revenue that missed expectations by well more than $600 million.

While the consensus still seems to be that the firm can be profitable over the course of a full year by 2020, one might think that those longer-term views might be at least somewhat reliant upon success in Chinese markets based on building vehicles to be sold there, in Shanghai. Shorter-term there is hardly consensus across the analyst community. Tesla will report the current quarter in late July. EPS estimates across 23 industry analysts for the quarter span a range of anywhere from -$1.69 to +$1.87 on revenue that lands between $5.42 billion to $7.19 billion. In other words, nobody really knows anything except that there will indeed be substantial year over year growth. That print will be up from a $4 billion number of the same quarter last year.

Fundamentally, the company remains in poor condition. Levered Free cash Flow is deeply negative, Margins are negative. Debt-load is massive, leaving the firm with a Current Ratio of 0.84, which is awful. As if that were not bad enough, sans inventories, the Quick Ratio lands at an incredibly anemic 0.37. Hard to find anything lower than that. For the sake of comparison, General Motors (GM) stands with a Quick Ratio of 0.77 (still terrible), and Ford (F) would be relatively healthy at 1.06.

By the way, 37.57 million shares are still held in short positions, out of a public float of 128.46 million shares. Roughly 29% of the entire float has to be bought back at some point. 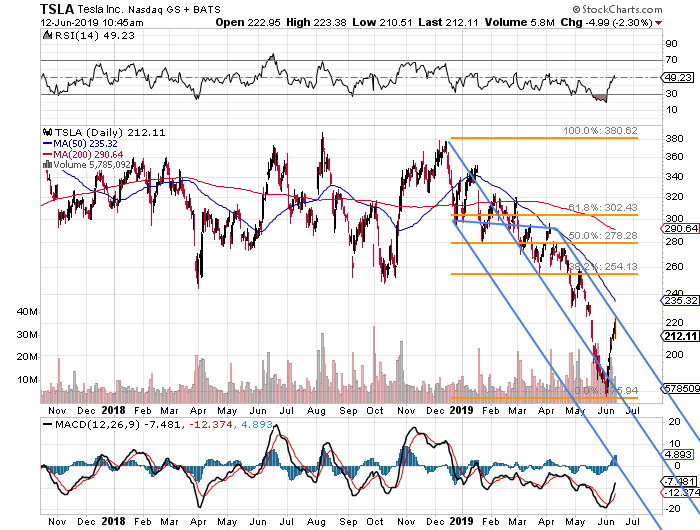 While Fibonacci style traders might hope for a rebound in these shares that approached the $278 level, the harsh reality of this chart would be the Wednesday morning high of $223 holds for the entire session, this will reinforce the idea that the name is still mired in a downward sloping Pitchfork model. While I enjoy being able to pull these models out of the closet when they fit, it really is a whole lot more fun when they point in the other direction.

The enormous short interest makes this stock less predictable than it might otherwise be. My end of day thesis is this: One can trade this stock in the way a mercenary goes about their job. Short-term, no heartfelt taking of sides. For the buy and hold crowd, I find this name way too risky, and will likely remain for me that way until the day that the fundamentals look very different. Until then, short-term trades off of Relative Strength and MACD are the order of the day.

Get an email alert each time I write an article for Real Money. Click the "+Follow" next to my byline to this article.
TAGS: Investing | Markets | Stocks | Technical Analysis | Trading | Automotive | Stock of the Day

The whole group has run and the guidance from Clorox does show, more than anything, that nobody knows.

Are Bear Markets a Thing of the Past?

Not for individual stocks -- let me show you what I mean.