The real thing? On the surface, a solid quarter. All things considered, a really solid quarter. Smooth performance across the board. Uhm. No. The business, and perhaps the planet are not yet ready for that. Let's take a look at the numbers. For the firm's first quarter, Coca-Cola (KO) reported adjusted EPS of $0.55, beating the street by a nickel. FYI, GAAP earnings still beat consensus. Revenue generation amounted to $9 billion, up 4.7% year over year, and also a beat of Wall Street's projections.

Most interestingly, organic sales growth printed at 6.0% versus expectations of a print flat from last year. Operating margin popped from 27.7% in Q1 2020 to 31% for this (Q1 2021) quarter. Perhaps the most impressive take-away from a year ago was growth in free cash flow, from $1.2 billion to $1.4 billion. Much of the margin improvement came as the result of cost-cutting measures that included layoffs.

As insinuated above, performance was lumpy across differing global regions, perhaps led by areas not as impacted by the pandemic such as China. Unit Case Volumes were flat for the quarter globally. Yet, Unit case volumes decreased by 6% in North America, decreased by 2% in Europe, Middle East & Africa, and ran flat in Latin America. That said, unit case volumes ran 9% higher in the Asia pacific region, and that offset the not so hot performance elsewhere.

Admittedly, the firm acknowledges lost value share in total non-alcoholic ready to drink beverages as an underlying share gain in both "at home" and "away from home" channels was more than offset by negative channel mix due to continued pressure in away from home channels, where the company has a strong market share. In other (my) words, the firm is still selling its share of beverages, but is still feeling the impacts of reduced demand from the "dining out" crowd.

Coca-Cola also announced on Monday a plan to publicly list Coca-Cola Beverages Africa as a separate company. This plan would be to sell a portion of its African bottling business through an IPO at some point over the next year and a half. The listing would likely be domiciled in Amsterdam with a co-listing in Johannesburg. Coke reiterates full year organic revenue guidance in the high single digits, and adjusted earnings growth also for the full year in the high single digit to low double digits.

Now, understand... I am long PepsiCo (PEP) and have no position in Coca-Cola, so it is completely possible that I am biased or talking my book. That said, they both outperformed expectations at this point of the recovery. KO is more affordable to the retail investor and pays a slightly higher dividend, not even close nominally, but in terms of yield. The tie breaker for me is in salty snacks. Both firms did better in Asia than at home or in Europe. PepsiCo's second largest business is the Frito-Lay division, and it grows steadily, maybe just 4% or so a year, but steadily. Did I mention it's large? Coke has no answer there. Sure, there may have been a pandemic there, but have you seen our youth? They were hooked on this stuff long before anyone on the other side of the world decided to eat an undercooked bat.

I like the technical set-ups for both names. in fact they look similar. Both PEP and KO are showing a "cup with handle" pattern, but the PEP cup is deeper (-14%, versus -12%) and a little more defined. They both sport handles with a rough depth of 3%. Compare. I showed you this PEP chart last week. 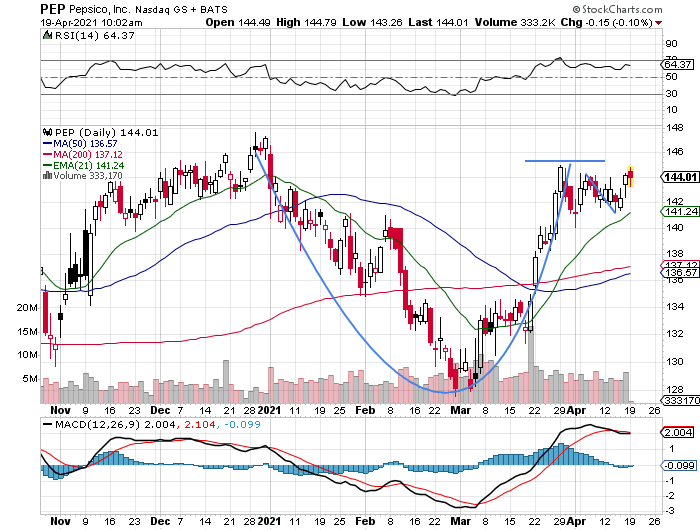 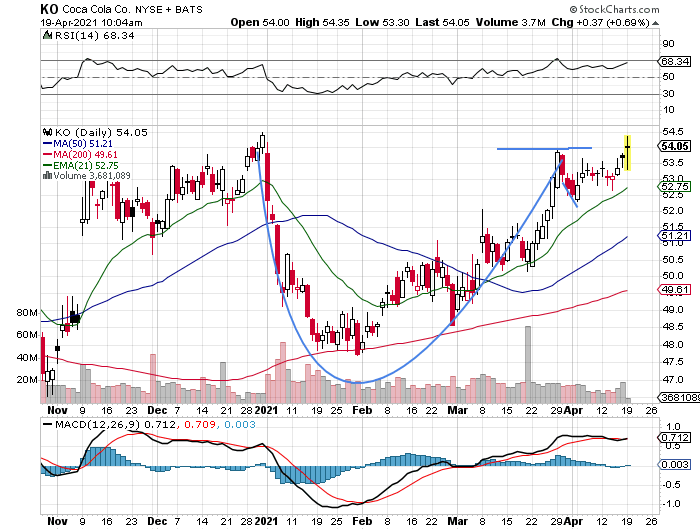 The point I am making is much like their flagship colas, this may just be a matter of taste. You are not long and "wrong" KO, just because I am long PEP. If KO is to your taste, the shares need to hold that $54 pivot today. You keep that $54 level, I think you see $65. You fail here... and $49 would be where I cut bait.

Get an email alert each time I write an article for Real Money. Click the "+Follow" next to my byline to this article.
TAGS: Earnings | Investing | Stocks | Technical Analysis | Trading | Beverages | Food & Drink

Sorry, This Bear Market Is Probably Only Two-Thirds Over

Here's why, even after two days of rallies, I am not moved to declare that the bear market is finished.