There's a Reason... that Boeing (BA) has been trading in a tightly defined trading range (basing pattern), with the exception of a mid-March spike, for three months. Really, if you combine two consecutive basing patterns that occurred leading into and coming out of that spike, the range spans all the way back to early December. That's right. Boeing gave up more than 3% on Monday to close at $239.96. On December 3rd, 2020, BA closed at $237.20. That's 0.1% growth over almost seven months. Rah. The S&P 500 is up 12% over the same period for comparison's sake.

So, what is Boeing? Is it the greatest of all re-opening plays as many have portrayed? Or is Boeing the problem child of many portfolios with a focus on the industrials? Even under still somewhat new management?

There Is Good News

This (Tuesday) morning, Boeing found a pre-opening bid as United Airlines (UAL) announced its largest aircraft order ever, for 270 narrow body commercial airliners, including 200 Boeing 737-MAX aircraft. The other 70 craft are for 321neos, which is manufactured by Boeing competitor Airbus (EADSY) . At list prices (unlikely), this is a combined $30 billion order.

In addition, American Airlines (AAL) had to cancel 120 flights this past Saturday, and another 176 on Sunday. Why? Not because demand remains subdued due to the pandemic, at least not domestically. U.S. airport travel increased 19% in May over April, and has continued to grow rapidly in June. The reason American Airlines had to cancel so many flights this past weekend was because of unavailable flight crews and maintenance disruptions. In other words, labor supply could not meet consumer demand.

The Rest of Boeing Is Healthy

Just last week, Boeing received a $580 million order for 14 H-47 extended range heavy assault rotary wing aircraft from the UK. The work will be performed in Pennsylvania and is expected to be completed by July 2026. Almost at the same time, Boeing won a $169 million contract from the U.S. Army to support the Apache (attack helicopter) full-rate production lot 12 long lead effort. This will be a job for the crew in Mesa, Arizona, expected to be completed by May 2027.

Last week, news broke that even six months after most western nations had lifted the flight ban on the already mentioned 737-MAX, that China remains still potentially a long way from doing so. While the Civil Aviation Administration of China is known to be among the most conservative of global aviation regulatory agencies, there is also the matter of Chinese state-owned Commercial Aircraft Corp, also known as COMAC. COMAC's C919, which will compete directly against the Boeing 737-MAX and the Airbus A320, is expected to seek domestic Chinese certification by the end of this year, and then certification globally thereafter. Hence, one might smell a point to be negotiated as a matter of global trade.

Then on Monday (yesterday), in the U.S., the FAA (Federal Aviation Administration) informed Boeing that the planned 777X aircraft is not yet ready for certification, and is probably going to be a late 2023 story. For obvious and good reason, certification standards are not what they once were.

For the quarter ended in March 2021, Boeing posted adjusted EPS of a loss of $1.53 per share on revenue of $15.22 billion (-10% y/y). Free Cash Flow per share came to $-6.28, which was the best print for that metric of the past five quarters, and the eighth straight negative quarter for that series.

The firm really can't turn around until free cash flow improves dramatically. The hope had been for global recertification of the 737-MAX by the end of 2020. Now, 2021 may not be realistic. The 777X is now delayed. The firm is still a major defense contractor, but that is not enough to carry the firm or support this market cap (roughly $140 billion). Boeing needs both business and recreational travel to rebound vigorously and not just domestically.

That makes the sudden resurgence of COVID-19 due to the aggressively contagious Delta variant so problematic. It becomes increasingly clear that travel will not normalize for much of the planet this summer, or maybe not even this year. Much of the planet is under-vaccinated and even in more developed areas of the world such as Europe, some vaccines perform better than others in fending off this variant. This is not just problematic for airlines with global operations, which is why I have stuck with Southwest Airlines (LUV) in that space, but also for those, including Boeing, who supply those airlines. 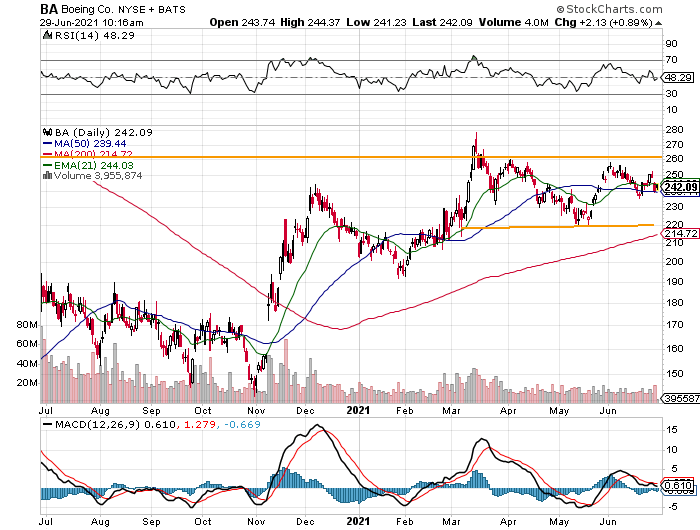 I think Boeing as an investment is risky. A talented trader could make some short-term hay getting in and out of the equity without emotion. I don't think this a good name for someone who might set it, and "forget it" for a while. For that crowd, I think the intent has to be to get these shares if one must have them close to the low, or even lower than the bottom of the current trading range.

My suggestion, instead of buying equity, would be to write (short) something like the September $220 puts for a rough $6.40. Not only is one's equity risk exposure, if tagged... below the bottom of the current range ($213.60), but if the shares never get there, for each contract written, that's $640 in collected premium.

Get an email alert each time I write an article for Real Money. Click the "+Follow" next to my byline to this article.
TAGS: Earnings | Economy | Investing | Options | Stocks | Technical Analysis | Trading | Aerospace | Airlines