The shares ran higher overnight. The story? Ran first at Bloomberg, and then everywhere business news is reported. Broadcom (AVGO) , according to these reports, is in advanced talks to acquire security software vendor Symantec (SYMC) . I'll say this for Broadcom CEO Hock Tan... the man is aggressive. Just last year, Broadcom acquired CA technologies (the old Computer Associates) for just under $19 billion. AVGO also made an attempt to purchase Qualcomm (QCOM) , but that deal was eventually blocked by the Trump administration.

Symantec has been an inconsistent performer. In May, the firm reported fiscal Q4 EPS of $0.39, or -11% year over year, a second consecutive quarter of double digit earnings contraction in percentage terms. As for sales growth... there really hasn't been much. Symantec has reported quarterly revenue somewhere in a range between $1.18 billion and $1.28 billion for an astounding nine consecutive quarters. (The second highest print came in at $1.23 billion).

It was on the same day as that release (May 9th) that Greg Clark abruptly stepped down from his post as CEO, and replaced immediately by Richard Hill, former CEO of both Marvell Technology  (MRVL) and Novellus Systems.

Later in May, interestingly, Barclays cited issues at Symantec as a reason for increasing that firm's target price for competitor Zscaler (ZS) from $55 to $80. Early June... Morgan Stanley downgraded the shares to "Underweight" with a $14 target price citing lost market share in endpoint security and in web security markets.

Richard Hill has been around the block. A couple of times. The firm had not performed well for quite a while. There is some talk on Wall Street this morning that this deal had been bandied about for weeks. I have no idea if that's true, but I think you can see how that might have happened. You can also see why Hock Tan, who has a history of shopping for discounted pieces and then making them fit, might think that he can run this business better.

The analyst community seems to agree. Wedbush, Piper Jaffray, and Bernstein are all out with positive commentary on this potential acquisition. Dan Ives (Wedbush) is a respected analyst in the space. He opines that there are some significant synergies and cost cutting to be had on the enterprise side. Ives also sees that if a deal does get done, it will likely be in the $26 to $28 range for shares of Symantec. At the Wednesday morning price that I see just after the opening of 424.20, that would be an increase of somewhere between 7.4% and 15.7%.

Should The Retail Trader Get Involved?

Well, if there is a deal, and depending on how the deal is built (cash vs. stock), I think a short-term profit of 7% to 15% is just dandy. Just be cognizant that if no deal is reached that this stock will trade lower quickly. That's a trade, and it carries risk. For investment in the space, I like Zscaler better, which is why I am long that name. With exposure to China an issue, I am not sure one needs to be in Broadcom, but if one were interested, this could be the discount that one has waited for. 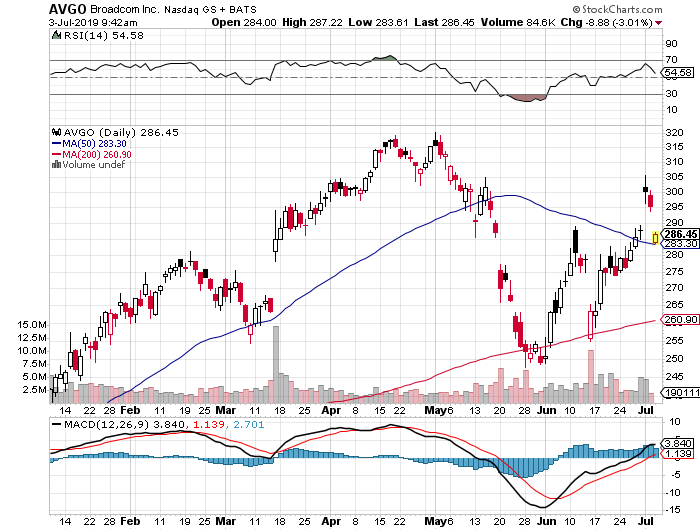 Just keep in mind that for AVGO, the 50 day SMA is in play on Wednesday. Something to keep an eye on. These shares need to stay above $283.30.

Get an email alert each time I write an article for Real Money. Click the "+Follow" next to my byline to this article.
TAGS: Investing | Stocks | Technical Analysis | Trading | Technology | Stock of the Day