On Monday evening, software/cloud giant Oracle (ORCL) reported the firm's fiscal first quarter financial performance. For the period, Oracle posted adjusted EPS of $1.03, and GAAP EPS of $0.86. The firm bested earnings expectations by either metric. The firm disappointed Wall Street as far as revenue generated is concerned. Oracle drove $9.73 billion in sales, good enough for annual growth of 3.8%, but below Wall Street. It might be noteworthy however, that adjusted for constant currency, revenue beat those same projections. It was that close.

The firm reports revenue across four segments, one of which is the majority of the firm's business. We'll go through this but as Oracle evolves into a cloud business, the reporting segments may have to be revised in order to more simply inform the investor of just what is and what is not working well. Oracle's largest reporting segment remains Cloud Services and License Support. This unit contributed revenue of $7.371 billion to the $9.73 billion whole. That's 76% of the whole enchilada and also growth of 6% by the way. The other three segments are Cloud License and On-Premise License, Hardware, and Services. All three contributed an approximate 8% toward the revenue pie with both Cloud License and Hardware in year over year decline, while Services are still growing.

Operating income for the entire firm amounted to $3.4 billion, up 7%, adjusted operating income increased 4% to $4.3 billion. Operating margin came to 35%, while adjusted operating margin was considerably higher at 45%. The firm points out that short-term deferred revenues currently stand at $10 billion, and that operating cash flow over the past 12 months has increased 17% to $15.3 billion.

Addressing specific products, CEO Safra Catz in the statement said, "Oracle's two new cloud businesses, IaaS (Infrastructure as a service) and SaaS (Software as a service) are now over 25% of our total revenue with an annual run rate of $10 billion. Taken together, IaaS and SaaS are Oracle's fastest growing and highest margin new businesses. As these two cloud businesses grow, they will help expand our overall profit margins and push earnings per share." In addition, revenue driven by the firm's Fusion ERP is up 32%, while revenue driven by the NetSuite EPP is up 28%.

Taking a look at the balance sheet, cash and cash equivalents are down considerably over the past three months, as are total current assets. The cash spent was on the repurchase of common stock if one navigates from the balance sheet down to the Cash Flow tables and back up. Goodwill stays where it was. Total assets decreased just a tad more than did the firm's cash position. There are no surprises found among total current nor total liabilities. Assets easily outweigh liabilities less equity. The balance sheet is healthy.

Free cash flow over the past 12 months is up 9%, while free cash flow as a percentage of net income printed at 90%, which is great, but for Oracle down from past quarters.

For the firm's second quarter, the outlook is for EPS of $1.09 to $1.13, which is slightly above Wall Street, and revenue growth of 3% to 5%. Wall Street is around 5% on that metric, so this is something of a disappointment compounding the just reported revenue number that was also disappointing. 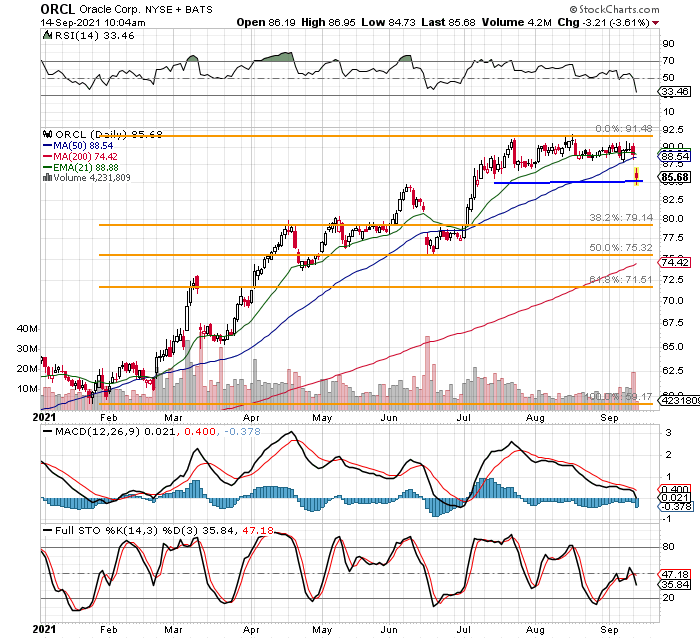 What you have here now is a weak opening that created a gap, where the stock is feeling around near the mid-July lows for support. You have a very weak RSI. You have a dreadful looking daily MACD. You have a less awful looking Full Stochastics Oscillator that looks like it could catch up to the RSI in a hurry if this morning's (Tuesday) support cracks.

The danger? That would be that the shares break for Fibonacci support at $79. The opportunity? That support here solidifies and the basing period of consolidation, in place since early July hardens as the shares move to fill the new gap.

The trader could grab something on this weakness with an intention to push it out as the shares approach the 50 day SMA as they fill that gap. Nothing wrong with that plan as long as the trader also has a quick trigger finger should this $85-ish support fail. The investor can find, in my opinion, something better to do with their money. Revenue growth has been sluggish, and the firm has flat out told you to expect the same for the current quarter. If you like ORCL, you don't have to hurry. It's not about to take off.

Get an email alert each time I write an article for Real Money. Click the "+Follow" next to my byline to this article.
TAGS: Earnings | Investing | Stocks | Technical Analysis | Trading | Technology

How Zoom Is Positioned Ahead of Earnings

Bullish divergences may finally generate a bounce, Here's how to trade it.

They are eager to make up for recent difficulties and are often more aggressive than normal.

Saved From the Dreaded Bear Market

If you didn't know we were in a bear market, now you know.