Lockheed Martin posted adjusted EPS of $7.13, which easily beat Wall Street's consensus. GAAP EPS printed at $6.52, which missed by a penny. The adjustment? A loss of $225 million or $0.61 per share after taxes, recorded within the aeronautics business segment, related to performance issues regarding a classified program. Looking at revenue generation, they posted $17.03 billion in sales, up 5% year over year, and good enough for a solid beat of expectations.

Breaking down the quarterly revenue by business unit, Aeronautics streaming the firm's largest segment, increasing sales by 3% to $6.67 billion, but producing $572 million in operating profit. This was down $167 million or 22.5%. This is where the impact of that $255 million adjustment was felt. The firm delivered 37 F-35 fighter aircraft during the reporting period, up from 17 for the first quarter. Readers will recall that Switzerland selected the F-35 back in June for a $6.5 billion fighter craft modernization contract, becoming the fifteenth nation in the program. Lockheed was selected ahead of offerings from Boeing (BA) and Airbus (EADSY) for that award. Currently up in the air is a similar contract valued at $11 billion, as Finland will be next to modernize their fleet of fighters. The big negative, or future positive, here is that the Pentagon has still not yet been able to run the simulation testing needed, and probably will not until 2022 for Lockheed to move the F-35 into full production.

The second largest unit is Rotary and Missions Systems that saw revenues climb 5% to $4.24 billion, driven by Sikorsky helicopter sales. Rotary and Mission Systems experienced a 6.7% increase in operating profit to $458 million. Space is now the firm's third largest producer at $3.18 billion in revenue, up 10%. This generated $335 million in operating profit, up 33%. Missiles and Fire Control still put together revenue growth of 5% with a print of $2.94 billion, led by the Army Tactical Missile System and the Long Range Anti-Ship Missile. That led to operating profit of $401 million, up 10.8%.

On a secondary note, hypersonic weapons are still considered to be a lucrative future driver of revenue for the firm. Readers may recall that a Lockheed hypersonic weapon failed to launch in its very first flight test back in April. No idea if this is related to any financial adjustment or not, but this is an area of national need, and in my opinion will provide sales. Earlier this year the firm saw such weapons as potentially as a $1.5 billion driver possibly doubling within years.

Still looks okay. Cash is a touch lower than it was six months ago, but still rather large. Total Current Assets are higher however, as Net Receivables, and Contract Assets, have increased. There has been no adjustment to the entry for goodwill. Total current liabilities are higher mostly due to increased accounts payable, but are still dwarfed by current assets. Reliance upon long-term debt has not increased, and the current ratio is still comfortably above the one level, which would be where we become concerned. 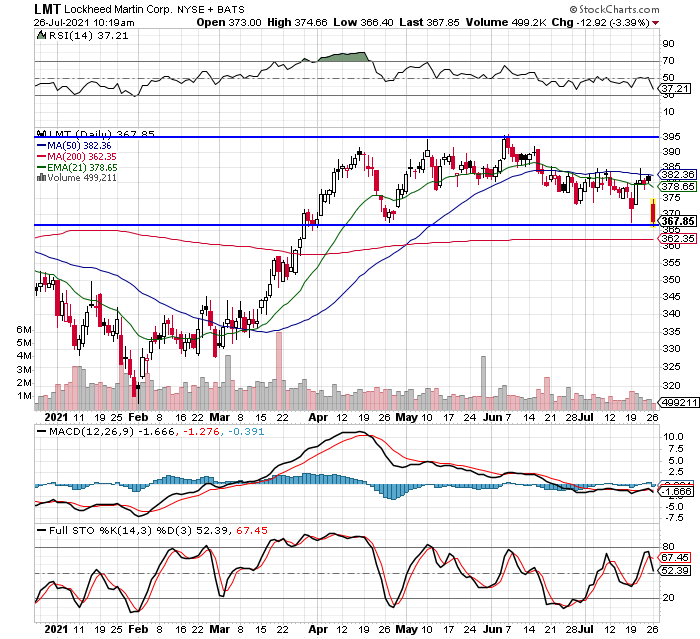 These shares are testing the lows of April this morning. Holding this level would reinforce the basing pattern that has been in place since the failed breakout of a cup and handle pattern that came about that same month. I see this spot as potential support. Should it fail, potential support drops to the 300 day SMA at $262.

Note that both the RSI and Full Stochastics appear non-committal, while the daily MACD seems mildly negative. Do I think there is a trade here? Probably.

Get an email alert each time I write an article for Real Money. Click the "+Follow" next to my byline to this article.
TAGS: Earnings | Investing | Stocks | Technical Analysis | Trading | Aerospace | Defense