Congratulations. You made it. 7% inflation. Been almost 40 years. In all seriousness, with the headline December CPI printing at hairline regrowth of 7%, and the core print at 5.5%, with last Friday's print for wage growth at "just" 4.7%, one has to wonder: What does negative real wage growth do to demand?

What does this do to real estate? What do higher interest rates do to real estate? Good thing you asked. The housing market has been hot. Yet, the homebuilder stocks have largely run sideways for most of the past year. On that note, KB Home (KBH) reports his evening.

After today's (Wednesday) market close, KB Home will release the firm's fourth quarter financial results. A consensus view of the 14 analysts I can find that cover this name is for EPS of $1.76, with a range of $1.68 to $1.86. Revenue generation is expected to land at $1.71B. The range around that print is running at $1.62B to $1.74B. Should the results match consensus view, these numbers would be good for earnings growth of 57% on revenue growth of 43%. That would be pretty darned impressive, but in reality, a deceleration of what has been spectacular growth for both the top and bottom lines. There have been very close to no revisions made by these 14 analysts concerning KBH over the past three months.

What investors will likely focus on, will be the order backlog. The third quarter (which produced 93% earnings growth on 47% revenue growth, missing expectations at the time of both metrics) ended with this backlog having expanded 89% to $4.84B, which was the firm's largest Q3 order backlog since 2006. This expansion was led by 140% growth in the U.S. southeast.

Dahl expects KB Home's "build to order" business model, which might have been a drag on gross margin in 2021, especially versus other homebuilders that build to spec and then sell, could be a comparable tailwind in a tougher 2022 environment. The analyst expects KBH's gross margin for 2022 to rise well above the 22.2% that Wall Street is looking for in tonight's Q4 report. (Dahl is above Wall Street, at 22.5% for that metric.)

Oddly though, as Dahl seems to favor KBH for 2022, he has cut his target price from $50 to $46. Dahl also cut his target for TOL from $75 to $70, but at least that was a downgrade. Basically, from here, Dahl sees 2022 as another 16% year for KBH. He just (my take) expects that to be outperformance as mortgage rates rise and real wage growth runs negative for 2022.

This is not our normal balance sheet. Current assets dwarf current liabilities. Total assets, as of the end of Q3, are almost twice total liabilities less equity. That sounds great, except that inventories comprise 87% of current assets and 81% of total assets. While that makes for a fantasy-like current ratio, it sure does out the whammy on the quick ratio should the environment change rapidly. Long-term debt dwarfs the firm's net cash position. This is understandable, given the firm's order backlog, but I still don't have to love it. Investors should be fully cognizant that free cash flow has been negative for three of the last four quarters. 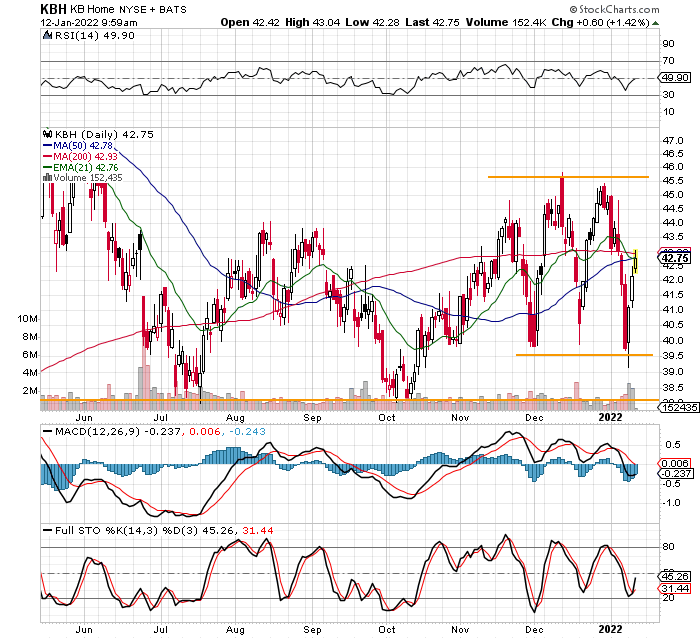 Triple bottom or triple top? What does it say about a stock when the 21 day EMA, 50 day EMA, and 200 day SMA all run with $42 handles? I think it says you can probably find something better to do with your money. The stock trades at seven times forward looking earnings. Is it cheap? Free cash flow sports a minus sign. Look, I don't think an investor would lose a ton of dough in this name, and there's that 1.4% dividend yield (ho-hum) if that's what you're after.

A trader could go out to April and write $38 puts expiring that month for about $1.60. At least you know that there is established support there. Psst...The April $37 puts ($1.18 last) are trading in much better volume.

Get an email alert each time I write an article for Real Money. Click the "+Follow" next to my byline to this article.
TAGS: Real Estate | Earnings | Investing | Stocks | Technical Analysis | Trading | Housing Market | Construction & Engineering