Uninvestable? They say that Alibaba Group (BABA) has a lot in common with Amazon (AMZN) . Both have a tremendous e-commerce business dominant in their regions. Both run large cloud computing operations as well as a number of other tech related services. One little thing is not so similar. Valuation. Amazon trades at 5 times forward looking (12 months) earnings after last week's beat-down. I bought more shares at lower prices, increasing my stake. Alibaba trades at just 20 times forward looking earnings despite it's regional dominance and global competitiveness. Alibaba reported the firm's fiscal first quarter on Tuesday morning. Let's explore, shall we?

For Q1, Alibaba posted adjusted EPS of RMB 16.60, or $2.57. This was a significant beat of expectations that had centered around RMB 14.30. However, revenue generation of RMB 205.74 billion (about $31.8 billion) fell almost RMB 3 billion short of what Wall Street was looking for. These numbers reflect earnings growth or 22.7% on revenue growth of 34%. The revenue number is a significant deceleration of growth.

Annual active consumers participating in the Alibaba ecosystem, globally... reached a rough 1.18 billion for the year ending June 30th, 2021. This is an increase of 45 million for the year ending three months earlier. The 1.18 billion is comprised of 912 million consumers in China, and another 265 million consumers elsewhere across the Lazada, AliExpress, Trendyol, and Daraz platforms. That said, adjusted EBITDA decreased by 5% compared to the same quarter last year primarily on increased spending on growth opportunities.

Easily still the firm's largest segment is Commerce. The unit contributed RMB 180.241 billion to the RMB 205.74 billion whole, producing income from operations of RMB 39.022 billion on an adjusted EBITDA margin of 25%.

Among smaller segments, Cloud Computing chipped in with RMB 16.051 billion in sales, while Digital Media and Entertainment earned RMB 8.073 billion, and Innovation Initiatives posted sales of RMB 1.375 billion. All three of these units posted negative income (losses) from operations. Adjusted EBITDA margin for Cloud Computing turned positive at 2%, while Digital Media (-5%) and Innovative Initiatives (-156%) did not.

I find it interesting that I have not found a single sell-side analyst that has opined on the stock since this morning when these earnings were released. Ahead of the numbers (last week), BABA did land two "buy" ratings with price targets of $268 and $285. That said, BABA also caught a "sell' rating with a $192 price target.

Alibaba's most significant asset is that it is a Chinese company that dominates its home and regional markets. Alibaba's biggest problem is that it is a Chinese company that is subject to the ever changing whims of government regulators now more interested in centralizing power at the expense of its own profitable businesses. Readers may recall that back in April, Beijing slapped a RMB 18 billion ($2.75 billion) fine on Alibaba after an anti-monopoly probe found that the firm had abused its position. This morning the Economic Information newspaper, which is backed by the state, described online gaming as "spiritual opium" and called for stricter curbs on the gaming sector. Gaming is a growing business for Alibaba. This story is probably more responsible for this morning's weakness than the revenue miss, as the story also has Tencent Holdings (TCTZF) trading 10% lower.

This is despite what looks to be a pristine balance sheet, healthy cash flows, and the announcement that the firm is significantly increasing the size of their share repurchase program. 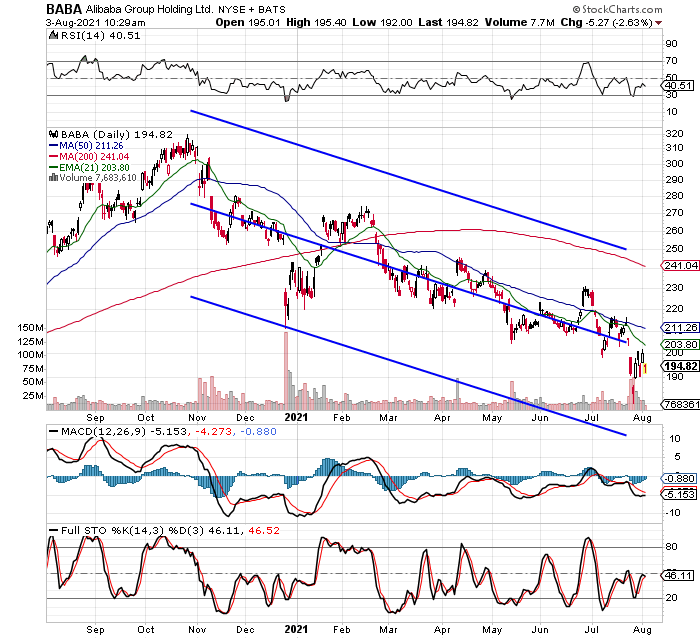 An e-commerce firm that just keeps falling during a global pandemic? BABA peaked at $319 back in October of 2020. The shares are now trading 39.2% lower, and while there has been some volatility on the way down, it has really been more like a slow, withering kind of erosion. That's regulatory risk. Oh, this is a good business. You may invest in this name and do well, but understand that you are speculating that Beijing will not interfere.

For that reason, Alibaba Group is at this time, like all Chinese stocks for now, uninvestable for investors who have options. Just save yourself the trouble and invest somewhere else. That's my opinion. Would you pay $85 for 100 (American depository) shares of BABA? You can still get paid about $1.05 to write a January 2022 BABA $85 put. I'm not going to do that, but it's an idea.

Get an email alert each time I write an article for Real Money. Click the "+Follow" next to my byline to this article.
TAGS: Earnings | Investing | Markets | Options | Stocks | Technical Analysis | Trading | E-Commerce | China