For his "Executive Decision" segment of Mad Money Tuesday night, Jim Cramer sat down to speak with Gary Guthart, CEO of Intuitive Surgical (ISRG) . ISRG is the surgical robotics maker that recently posted a minor earnings miss, but has still seen its shares climb 14% for the year.

Intuitive's latest robot, called Ion, is expected to be a game changer for lung cancer, Guthart explained, as it allows definitive diagnoses to be performed faster. Guthart said Ion is expected to do well in markets like China, where there is an increase in lung cancer and lung diseases. Cramer added that whenever the broader markets decline, investors should be looking at companies like ISRG. Let's take a look at the charts.

In this daily bar chart of ISRG, below, we see that prices rally strongly -- as they did from early April to late September. During the advance, the rising 50-day moving average line acted as support, and dips toward the line were buying opportunities. The daily On-Balance-Volume (OBV) line rose with the price action and confirmed the rally.

ISRG corrected to the downside in the fourth quarter, but the price movement and the indicators were strong. Prices declined -- but notice how long ISRG stayed above the rising 200-day moving average line. The line was not broken until late December, and then ISRG quickly rallied back over the line.

Now, ISRG is above both the rising 50-day moving average line and the bullish 200-day line. The 50-day average is about to cross above the 200-day line for what is commonly called a golden cross. These crossovers are typically late and viewed as bullish (when back-tested, these crossovers are not all that reliable).

Another positive to point out is the bullish divergence from the On-Balance-Volume (OBV) line -- the line made a double bottom in October and December when prices made a lower low. The same pattern can be seen on the Moving Average Convergence Divergence (MACD) oscillator, which crossed above the zero line in January for an outright buy signal.

In this weekly bar chart of ISRG, below, we can see that patient longs from 2016 have been rewarded. ISRG is above the rising 40-week moving average line. The weekly OBV line is pointed up and the MACD oscillator gave a new buy signal in early February.

In this Point and Figure chart of ISRG, below, we can see the 2018 rally and the fourth-quarter correction. The late February trade at $550.23 was an important upside breakout. A longer-term price target of $681.70 is shown. A trade at $584.08 is needed to refresh the uptrend. 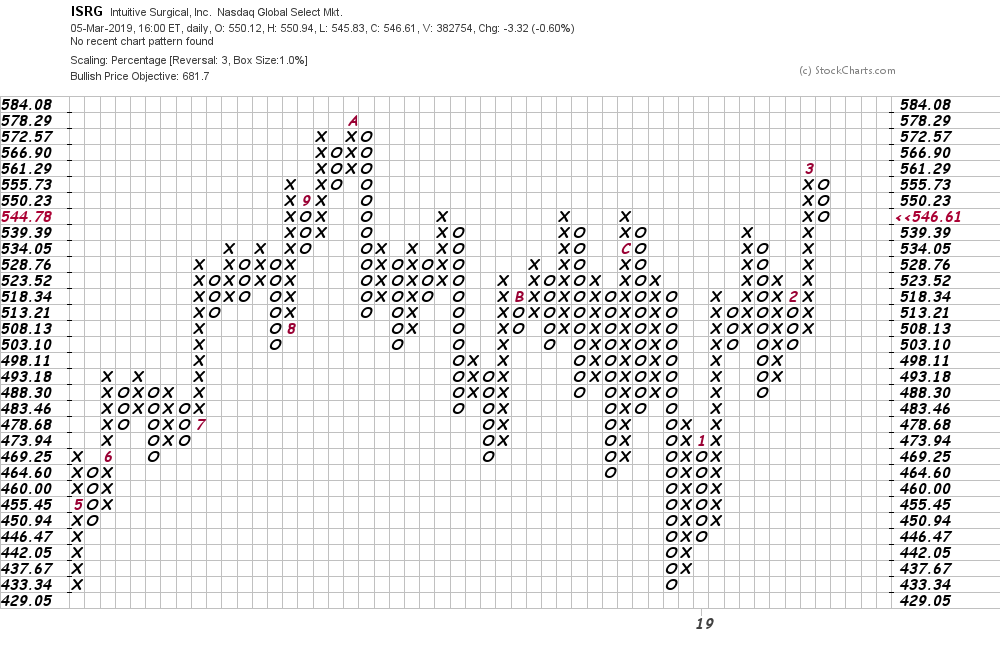 Bottom line strategy: ISRG could trade sideways for a few weeks before attempting a test of the late September/early October zenith. Traders could go long here and wait, if they are okay with risking a close below $515, otherwise wait to buy strength.

Get an email alert each time I write an article for Real Money. Click the "+Follow" next to my byline to this article.
TAGS: Investing | Stocks | Technical Analysis | Health Care Equipment & Services | Healthcare | Executive Interview