TWTWTWTW...That Was The Way They Went This Wednesday. Hmm. They rallied, they sold off, then they rallied, then they sold off, then they rallied one last time into the closing bell. Equity index futures have been trading well above fair value for those of us who work through the night. Equities rallied across Asia and across Europe... with one curious exception. The Shanghai Composite gave up a rough half of one percent. Then again, that's really not that crazy given the agreement just signed that, to be honest, really looks extremely one-sided in what it does for U.S. exports.

Thought we might see a "sell the news" event once there was some "official" easing of trade related tension between the world's two economic super powers? A lot of professionals thought so too. Still might, but for now, talk of a second round of U.S. tax cuts to be revealed at some point during the electoral season was what traders were talking about as Wednesday wore on. More so than trade. Impeachment? There was some talk, but more like political gossip, not in any way tied to finance or economics. The Beige Book? First time I can recall in a dog's age that no one I know even mentioned that specific release. Not a soul.

I did think it of interest that the divergence between equity performance and the diminishing spread between yields paid by the U.S. 3 month T-bill and the U.S. 10 year note exacerbated, seemingly surrendering overall control of our broader domestic equity indices, but still certainly in control of sector rotation. If one thought that leadership on Wednesday might come from industry groupings most negatively impacted by the condition of trade between China and the U.S., one thought wrong. Investors largely moved toward a more defensive posture, as Utilities, Health Care, Staples and REITs all finished a volatile day out in front of Industrials, Info Tech, Financials, and Energy.

Actually, in some ways, yes, this deal goes well beyond what many here in the U.S. thought could be accomplished. Though, for both nations, the current schedule of tariffs will remain largely unchanged, which by extension will mean continued uncertainty for many purchasing managers and continue to drag on economic growth for the short to medium term. Beijing at least in verbiage committed to crack down on some fundamental issues that have been key concerns for the U.S. side, and did so while committing to dramatic increases in purchases of U.S. goods and services well above and beyond 2017 (pre-trade war) levels. We'll go there first, since this is where the most immediate positive impact for the U.S. side will come from.

The year was 2017. China imported $186 billion in goods and services from the U.S. that year. Through the pact signed on Wednesday, China has committed to take that number higher by an aggregate $200 billion over two years. The deal calls for China to increase that number by $77 billion this year to $263 billion, and to take that number up to $309 billion in 2021 (+$123 billion from 2017). The U.S. trade deficit with China has added up to a rough $320 billion for the first 11 months of 2019 (we don't have numbers for December just yet), so these levels, if actually lived up to (another issue all together) would significantly improve conditions for exporters of U.S. agricultural, energy related, and manufactured goods.

Does such a large increase in Chinese spending on U.S. "stuff" give reason to doubt that future action lives up to words on a page (or 86 pages for that matter)? There is a statement within that allows for some wiggle room... The purchases "will be made at market prices based on commercial considerations." There is also a stipulation that "market considerations" would impact timing. Things that make you go hmm.

Should all go as planned, which asks a lot, expect to see more purchases of U.S. aircraft (is this what saves Boeing (BA) from itself?) automobiles, metals, pharmaceuticals, WTI Crude, Liquefied Natural Gas, grains, meats, and seafood, etc.

As for the stuff that really matters longer-term, both sides have at least in writing agreed to not "require or pressure persons" to transfer technology in order to enter markets or gain regulatory approvals. China has also agreed to get tougher on the protection of trade secrets, and assess criminal penalties for what are termed "willful trade secret misappropriation."

Perhaps a real win for the U.S. beyond those already mentioned here will be in the financial space. China has agreed to fast track U.S. applications to enter Chinese markets for payment systems and bank cards if the U.S. will do the same. Mastercard (MA) , American Express (AXP) , Visa (V) , and from the Chinese side, the UnionPay system, are all mentioned by name.

Many across my circles have interpreted this agreement, as a Chinese acceptance of President Trump's reelection. I do see how that assumption might be made, but I don't know if it's really that simple. What is obvious is that there is no interest in a decoupling of the two economies... from either side.

Perhaps, from a Chinese perspective, and my perspective is American, so this is mere conjecture... would be that Beijing has indeed decided to try to put the trade war on pause through the coming election, and then given the wiggle room provided in that verbiage... take a new temperature regarding the climate between the two nations later on. What that does is allow the Chinese economy to maybe heal itself somewhat in 2020 in preparation for what may be the real points of contention as well as much higher planned spending increases in 2021. No matter who is in the White House. I enthusiastically embrace what has to this point been agreed to. I do not yet think that the Cold War has been quite cancelled.

He mentioned the idea back in mid-December to David Asman on the Fox Business Network. Stocks moved higher. National Economic Council Director Larry Kudlow was out and about, making the rounds again on Wednesday. Kudlow appeared both on CNBC, and again at the Fox Business Network, this time with all-time great Liz Claman. (By the way, your best pal appears on that show later this day.)

The gist of what Kudlow has been trying to tell us, is that perhaps the White House has plans to unveil a "Tax Cuts 2.0" plan sometime later in 2020. One of this administration's landmark legislative victories has been the 2017 Tax Cuts and Jobs Act. This law reduced corporate tax rates to 21%, while also reducing tax rates for closely held (smaller?) businesses. The idea was to drive job creation and business investment while GDP returned to levels not seen in decades. Well, the business investment has probably been below expectations, and GDP has been hampered by the trade war, so it becomes difficult to measure actual economic growth directly related to that tax cut. Demand for labor, however has been phenomenal, at levels that economists had largely and extremely incorrectly thought of as "Full Employment." Perhaps the economy itself was closer to "full employment" than were labor markets.

A second tax cut plan would be aimed at the middle class, as there was some benefit there, particularly in states that don't try to rip the lungs out of constituent taxpayers, but certainly not across the board. Kudlow has mentioned the 15% level as a good idea for middle class earners.

Markets have clearly noticed such talk, but is this even realistic? Or maybe just election year politics that will play very well with working voters when compared to the tax increases that the president's potential opponents have been talking about? Personally, I will be surprised if significant headway is made toward a second round of tax cuts. I do think either way, there will have to be a discussion on creating a more balanced federal budget. The deficit remains the one item permanently lacking in anything resembling political will to try to address, on ether side of the aisle. It's just not good politics. That leaves out this year, in fact it leaves out most years.

On Wednesday, Malaysia Airlines made the decision to suspend the delivery of five of Boeing's (BA) 737-Max aircraft that were to be delivered this July. This came one day after American Airlines (AAL) canceled the 737-Max for all schedules through June 3rd. These news item "landed" on top of headlines that showed Boeing's net commercial jet orders for 2019 at -87. That's right, Boeing landed orders for a net negative number of commercial jets for en entire year. Nice goin'.

While Boeing has really hung in there quite well, considering actual performance in terms of multiples per trailing 12 months' earnings, I can't help but think that if Boeing can get themselves squared away, then the firm provides an easy way out, if say... the world's number two economy had maybe signed an agreement to make large scale purchases over two years from U.S. manufacturers. Hey, we don't make a lot of stuff here in the U.S., but Boeing does (normally), big, very expensive stuff. Based on what has been signed, I think fortunes turn for the better in the short-term for the likes of United Technologies (UTX) , Honeywell (HON) , and maybe even General Electric (GE) .

Changing the subject, but sticking with aerospace, you know that I have long loved Lockheed Martin (LMT) and that stock has certainly returned my affection.

Not a bad year. That said, two other well-known aerospace/defense contractor type names are right now testing pivot points to the upside while coming out of cup with handle patterns. Check out Northrop Grumman (NOC) ... 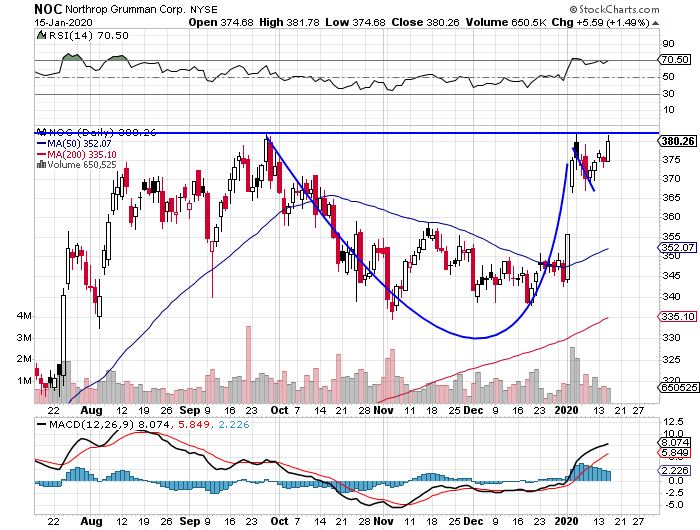 and check out L3Harris Technologies (LHX) ... 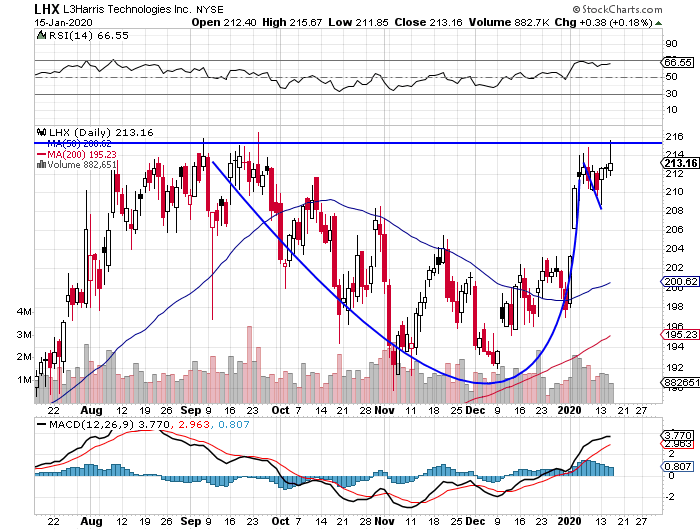 Holy passive investment strategies, Batman!! It's the same darned chart, for both stocks. Well, L3Harris reports on January 28th, Northrop Grumman reports on January 30th. Trying to decide on one? Neither really stands out as a dividend payer. Both are somewhat undervalued versus the broader market. NOC drives a better operating cash flow, and remains cheap relative to the Industrial sector, relative to LHX. Just my two cents.

(Mastercard and Honeywell are holdings in Jim Cramer's Action Alerts PLUS member club. Want to be alerted before Jim Cramer buys or sells MA or HON? Learn more now.)

Get an email alert each time I write an article for Real Money. Click the "+Follow" next to my byline to this article.
TAGS: Economy | Investing | Markets | Stocks | Technical Analysis | Trading | Aerospace | Defense | China